Economics and Indian economy is considered as the vital part of the Civil service examination. It is an essential subject not only for Civil Services Preliminary Examination but rather for Main and Interview also. As a Civil Service aspirant, one is expected to know about the current scenario of the country with relevant economic indicators and trends. So, one should not take this subject lightly. Aspirants should be through basic concepts. They should update their knowledge in the economy with current updates.

Economics is not only about cash or money. It talks about the decisions made based on the resource available. It is a study of how societies use scarce resources to produce valuable commodities and distribute them among different people.

In UPSC Civil Service Examination, economics plays a crucial role. On an average around 14-15%, weight-age is given to Economics.

HOW TO TACKLE ECONOMICS

Economics/the Indian Economy seem to be a difficult subject to some candidates. UPSC asks questions which are based on the theories and conceptual understanding of macroeconomics. Rote learning the data and theories will not help a candidate in their exam. A thorough basic understanding is required to tackle the economy subject of UPSC Syllabus. Conceptual clarity is what matters the most in Economics. Without conceptual clarity, one cannot move forward. It has so much of relevance to our day-to-day lives 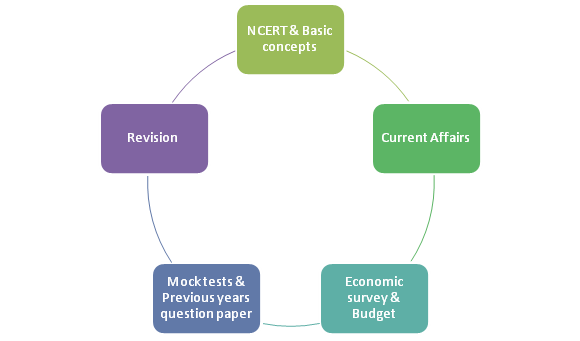 Right book is an asset to understanding Indian Economy. There are no better books than NCERT that would build your fundamental understanding economy. The NCERT which uses simple language help the candidate to absorb the conceptual ideas without any difficulty.

The Budget and Economic Survey of India

Economics is a very dynamic subject. UPSC asks so many questions from the government documents such as the Economic survey. The highlights of the budget are also important for both UPSC Prelims examination and Main examination.The Economic Survey of India is the finest and the most extensive record about the condition of Indian Economy.It gives you the rationale behind each initiative, government program, analysis, important Welfare Schemes and the guide for the future of Indian Economy. Candidate should jot down all important policies, initiatives, and decisions of the Government of India, especially those are mentioned in the Economic Survey. BYJU’s also publishes the summary of Economic Survey every year, which candidates can refer to check important chapters of the Economic Survey as well as some useful infographics.

HOW TO PREPARE FOR ECONOMICS

The candidate should give more focus on basic theories and concepts related to economics. Without a thorough knowledge, one cannot study economics and will fail to interlink with perspectives. While preparing for the Indian economy, aspirants should give more importance to the updated facts and data.Updating your traditional knowledge in economics with current affairs is very important. Knowing just an essential idea or just current issues would not help a candidate to crack the civil services examination. One should correlate the conventional/ traditional area and current affairs. After basic reading, it is highly recommended to go through the economic survey (selected chapters), highlights of budget and India year book. Solving UPSC previous year question paper and giving mock tests also help the candidate to crack the civil services preliminary examination in one go.Below given is a sample question asked in the UPSC civil services prelims exam 2016.

Why the question came:
It was much in news, especially with India’s new Startup Culture. It was launched by the Prime Minister in April 2016. This term ‘‘Stand Up India Scheme’ was a boxed item in Economic Survey2016-17 too.

REFERENCE BOOKS AND OTHER SOURCES