1. Wearing hijab is not essential part of religion: Karnataka HC

What is the Karnataka Hijab row?

The Karnataka High Court observed that wearing the headscarf is not an obligatory religious practice in Islam. As a result, it is not protected under Article 25 of the Constitution’s right to freedom of religion.

What is ‘Sealed Cover’ Jurisprudence? 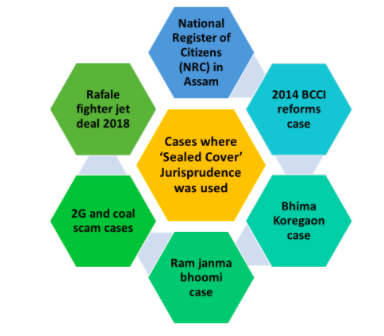 What is the criticism of  ‘Sealed Cover’ Jurisprudence?

Nut Graf
The Supreme Court’s criticism of the ‘sealed cover jurisprudence’ is significant as the practice is not only against the concept of a fair trial but also infringes upon important fundamental rights of citizens.
Category: INTERNATIONAL RELATIONS

Syllabus: India and its neighbourhood relations.

Context: In March 2022, a missile was “accidentally released” from India which landed inside the territory of Pakistan.

About the accidental missile launch incident:

Which is the missile system in question?

Implications of the accidental missile launch

Nut Graf
The unfortunate incident of an accidental missile launch casts a shadow over India’s storage, maintenance, handling, and even engineering norms for high-tech weapon systems. As both India and Pakistan have nuclear weapons, any such accident may be mistaken for an invasion, prompting response steps on the other side, escalating the situation further. Thus necessary measures to avoid such preventable escalations are required.

Mains: Solar energy capacity in India and the challenges in mainstreaming solar energy

Context: This article examines the milestones achieved by India in solar capacity installations and the challenges associated with it.

Why is India falling short in roof-top solar installations?

Nut Graf
India has progressed from strength to strength in overcoming challenges to reach the 50 GW milestone for solar energy installation, however, further measures are required to overcome the challenges faced by the sector to realize the goals set under the National Solar Mission.

Mains: Challenges for India in the international relations domain in the early 1990s; India’s diplomatic moves during the period and its results.

Important diplomatic moves of India in the early 1990s:

Dixit principles and its relevance:

Relevance to the present times:

Nut Graf
India is well advised to adopt the Dixit principles while dealing with the challenges brought forth by the ongoing Russia-Ukraine conflict. India should maintain its neutral stand, engaging with all stakeholders to safeguard its own core national interests while also trying to find a peaceful solution to the conflict.

Syllabus: Effect of Policies and Politics of Developed and Developing Countries

Mains: Changes in Pakistan’s foreign policy and how this would impact the Taliban regime in Afghanistan and Pakistani interests.

Impact of the new developments: