In this article, you can get a brief on the cold war. This is an important term in international affairs and affects world politics to this day, although the cold war first ‘broke out’ in the aftermath of the Second World War. Questions can be asked from this topic in the IAS exam, particularly the UPSC mains exam.

Background of the Cold War

The term “Cold War” denotes the absence of large-scale military operations fighting between the two opponents despite major regional wars, termed proxy wars, supported by both sides. The USSR and the USA were left as two superpowers with political and economic differences as a result of the Cold War that split the temporary wartime alliance against Nazi Germany

The seeds of future hostility were sown towards the closing years of World War 2. After the crossing of the Rhine in March 1945, the fall of Nazi Germany was inevitable. As such the Allies began drawing up the map of post-war Europe. The problem was each faction had their own idea about post-war Europe.

Each side held dissimilar ideas regarding the establishment and maintenance of post-war security. Foreign policy experts believed that while the Western Allies, who would go to form the North Atlantic Treaty Organization (NATO), favoured a democratic system of governments with fair elections as a measure to resolve any issues that might arise in the future, the Soviet Union was insistent on installing communist governments in countries under its influence. Even the Allies were divided on the issue of how best to deal with the now-belligerent Soviet Union. The Americans were more than happy to let the Soviet Union do as it pleased as their goal mainly to achieve American economic supremacy that would undo the legacy of old colonial entities like the British Empire, while the French and the British favoured complete independence of Eastern European countries, especially Poland, over whose independence both nations had declared the war over Nazi Germany in the first place. Additional and independent and strong Central Europe would act as a buffer between the Soviets and Western Europe.

In April 1945, President Roosevelt died and was succeeded by Harry S. Truman. This caused a remarkable change in US-Soviet relations. Truman distrusted Stalin and opposed many of the changes that Stalin brought to the geopolitical landscape of Central and Eastern Europe, especially with regards to the “Polish Question”. The Soviets had installed the communist government based out of Lublin, who were rivals to the Polish government-in-exile in London, whose relations with the Soviets had been severed following the discovery of the Katyn Massacre in 1943.

The 1945 Allied conference in San Francisco established the multi-national United Nations (UN) for the maintenance of world peace, but the enforcement capacity of its security wing the United Nations Security Council was effectively paralyzed by the ability of individual members to exercise veto power. Accordingly, the UN was essentially converted into an inactive forum for exchanging polemical rhetoric, and the Soviets regarded it almost exclusively as a propaganda tribune. Thus the stage was set for the longest period of geopolitical tensions of the 20th century, whose effects last to this day.

Causes of the Cold War

During the height of the Cold War, the world was divided into the major military blocs created by the warring superpowers they are as follows: 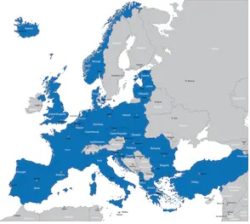 Important Events of the Cold War

Some of the important developments in the cold war period are given below:

In the first major conflict since the end of World War 2, a crisis occurred in the Korean peninsula when Communist North Korea invaded democratic South Korea. This was the first test for the newly-formed United Nations to stop escalation between the two superpowers who were using their proxies to fight for them. A United Nations Army under the command of American General Douglas Mac Arthur pushed back North Koreans following the decisive battle of Inchon.  However, the push into North Korea and China threatened to escalate matters when the Soviet Union pledged to support its allies for what they saw as a fight “against capitalist tyranny”. The war began on 25th June 1950 and ended on 27th July 1953 with the establishment of the Korean Demilitarized Zone. Tensions between North and South Korea persists to this day despite decades after the fall of the Soviet Union.

The USSR deployed nuclear missiles in Cuba which were ready to be launched onto the cities of the USA. The USA responded with a naval blockade of Cuba and both superpowers are on the verge of war. The standoff ended after 13 days when the USSR withdrew the missiles.

The US intervened in the Vietnam crisis in 1965 by sending troops to aid South Vietnam in its fight against communist North Vietnam. North Vietnam was supported by the USSR and China. The Vietnam war (Which ended on April 30, 1975)proved very costly for the US where they lost about 58000 men. The losses and anti-war sentiment by its own people forced the US to withdraw its troops from Vietnam. In 1975, the Vietnam war ended with the fall of Saigon, the capital of the South Vietnamese government, with a decisive victory for communists.

This occurred in 1968. The communist government of Czechoslovakia tried to bring in reforms such as multiparty democracy and more freedom for the media. This alarmed the powers that be in Moscow. They feared this would cause a domino effect in Eastern Europe with every other nation asking for more concessions if the Czechoslovak government was allowed to continue its present course. The USSR sent in troops on the pretext of restoring order, leading to the collapse of the Prague spring was thwarted by the USSR which intervened with troops.

Tensions between the US and the Soviet Union were abating in the seventies. But the situation in Afghanistan reversed this trend. The Afghanistan crisis further escalated when the Soviet army invaded Afghanistan to help the communist government there fight the insurgents called Mujahideen. The United States responded by supporting the Mujahideen elements in a war that lasted ten years there. The Taliban emerged directly as a result of this war. The US-funded the Mujahideen through Pakistan’s ISI. The Afghan war ended in 1989 when Soviet troops withdrew from there. This had long-lasting consequences for South Asia itself. The fighters from the Afghan-Soviet war were funnelled into Kashmir, leading to a rise in the insurgency in the state.

In 1985, Mikhail Gorbachev rose to become the leader of the USSR. He initiates capitalist reforms known as perestroika and glasnost. He also let the Berlin Wall crumbled on October 30, 1989. Finally, in 1991, the Soviet Union was disbanded and new countries Russia and others emerged as independent nations. Most of the eastern European countries have popular uprisings against communist governments.

Another outcome of the cold war is the Non-Aligned Movement (NAM). When the cold war emerged, there were many newly independent countries in the continents of Asia and Africa. Most of them including India did not want to be aligned with either the USA or the USSR. This led to the development of the NAM which played a huge role in curbing the spread of the cold war to cover the entire globe. NAM was opposed to military blocs like NATO. The major leaders of the NAM countries who played a significant role in it were India’s Jawaharlal Nehru, Indonesia’s Sukarno, Egypt’s Gamal Abdel Nasser and Yugoslavia’s President Tito.

Why was the confrontation between the United States and the Soviet Union called a ‘Cold War’?

It was called the Cold War because neither the Soviet Union nor the United States officially declared war on each other. Instead they funded and armed the various ideological factions to expand their influence.

How did the Cold War end?

During 1989 and 1990, the Berlin Wall came down, borders opened, and free elections ousted Communist regimes everywhere in eastern Europe. In late 1991 the Soviet Union itself dissolved into its component republics. With stunning speed, the Iron Curtain was lifted and the Cold War came to an end.

The above details would be of help to candidates preparing for UPSC exams this year. You can know more about the topics asked in the exam by visiting the UPSC Syllabus page and also refer to the links given below for more articles.