1. The controversy over the proposed Mekedatu water project

Syllabus: Issues and challenges pertaining to the federal structure

Mains: Significance of the Mekedatu project and its associated issues.

With the onset of summer, the stalemate over the Mekedatu project between Karnataka and Tamil Nadu has come into the limelight.

Read more about the Mekedatu dam project and key issues surrounding it in the link.

Significance of the project to Karnataka

Current status of the project

Nut Graf
With the Tamil Nadu’s Assembly passing a resolution against the Mekedatu project and Karnataka’s assembly countering it with a resolution seeking for the speedy clearance and implementation of the project, both the states find themselves at loggerheads over the Mekedatu water project across the river Cauvery.

Mains: The significance of the surge in merchandise exports and its role in the revival of the Indian economy. 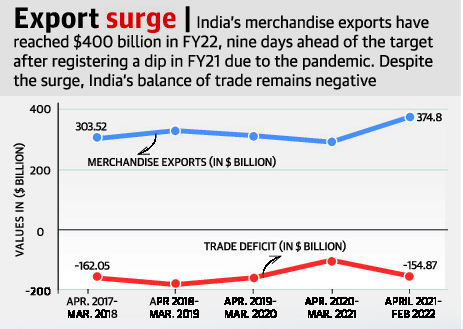 Significance of the achievement

Nut Graf
India crossing an ambitious target of $400 billion in goods exports, despite the challenges of the COVID-19 pandemic and the global uncertainties due to the Ukraine crisis, is a remarkable step towards achieving India’s vision of “Aatmanirbhar Bharat”.

Syllabus: Awareness in the field of Space

Mains: The significance of the Artemis programme and its role in NASA’s future endeavours.

In March 2022, the National Aeronautics and Space Administration (NASA) unfolded its Artemis I moon mission.

Involvement of other space agencies

The mechanism of the project

Importance of the programme

Nut Graf
The Artemis I programme by NASA is touted to be a critical part of NASA’s sustainable lunar operations and will play an important role in designing and implementing future space projects.

Mains: Impact of the geopolitical uncertainties on the Indian economy

Impact of the COVID-19 pandemic on the Indian economy:

Impact of the ongoing geopolitical conflict on India’s economic recovery:

Bracing for the increased oil prices:

Nut Graf
The ongoing Russia-Ukraine conflict and the geopolitical uncertainties caused by it will adversely impact the normalization of the Indian economy in the post-pandemic phase. Appropriate monetary and fiscal policy initiatives will be needed to overcome the impact and sustain the economic recovery.

2. Tracking the persistent growth of China

Mains: China’s strategy in the manufacturing sector and learnings for India

Economic performance of China during the COVID-19 pandemic:

China’s strategy in the manufacturing sector:

Other measures being taken:

In the post-pandemic era, China is positioning itself to cause an unprecedented change in industrialisation through automation, digitization, and increased adoption of artificial intelligence (AI). The early mover advantage that China enjoys in this regard will help it remain the global manufacturing leader in the years to come.

Which of the statements given above is/are correct? [UPSC 2021]