Infotech industry association Nasscom has urged the Prime Minister to temporarily relax stringent Foreign Contribution (Regulation) Act (FCRA) norms so as to ease the flow of overseas COVID-19 relief into the country and grant emergency use authorisation for all WHO-approved vaccines in view of domestic vaccine shortages.

This topic has been covered in the 10th May 2021 Comprehensive News Analysis.

Read more on Emergency Use Authorisation.

The central government has filed a review petition in the Supreme Court challenging a majority view of its Constitution Bench that only the Centre has the power under the 102nd Constitution Amendment to identify and list Socially and Educationally Backward Classes (SEBC) and not States.

This issue has been covered in the 6th May 2021 Comprehensive News Analysis.

The Assam National Register of Citizens (NRC) authority has approached the Supreme Court seeking a comprehensive and time-bound re-verification of the citizens’ list, highlighting major irregularities in the process.

Read more on the National Register of Citizens.

Tensions in East Jerusalem have triggered the heaviest Israel-Palestine fighting in years. Israel faced an escalating conflict on two fronts trying to quell riots between Arabs and Jews.

This topic has been covered in the 12th May 2021 Comprehensive News Analysis.

Public health advocates and intellectual property rights experts point to a contradiction in India’s global push for the suspension of intellectual property protection, with its stand in the Supreme Court that bringing COVID-19 vaccines under a statutory regime will be counter-productive at this stage.

This topic has been covered in the 7th May 2021 Comprehensive News analysis. 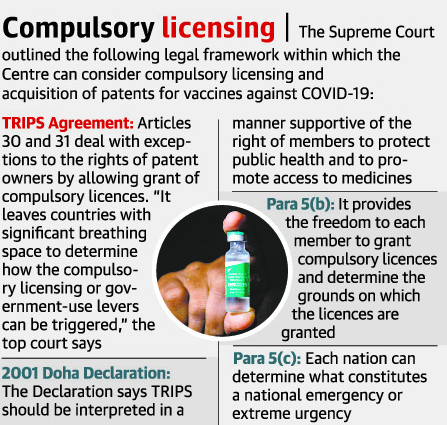 1. The crime of enforced disappearances must end

Enforced disappearances are becoming a major concern in Asia. Cases especially in Asia are not decreasing, with domestic criminal law systems insufficient to deal with this atrocity.

An enforced disappearance is defined by several constituent elements.

Read more on this issue covered in 13th May 2021 Comprehensive News Analysis.

In the backdrop of the Covid-19 pandemic, the numerous challenges being faced by India’s health systems have become apparent.

A regulated market with medical colleges that are publicly funded but privately operated cannot be a feasible solution to the health workforce crisis. Medical education is a public good as its purpose is to improve the population health and decrease disease burden. The pandemic has provided an opportunity for this. There should be a substantial step-up in public investment in medical education.

As per the latest report by the World Health Organization, in spite of adding the highest number of COVID-19 infections to the global caseload every day, India continues to label itself as a country with no community transmission (CT).

A mobile app that would allow media persons to view the Supreme Court’s virtual proceedings live on their mobile phones has been launched.