The Red-eared Sliders are threatening to invade the natural water bodies across the Northeast. 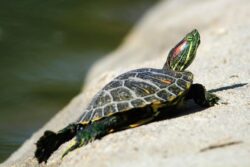 According to the Ministry of Environment, Forest and Climate Change (MoEFCC), a total of 186 elephants were killed after being hit by trains across India between 2009-10 and 2020-21.

The governor of a state is a very interesting appointee of our political system. Seen as part of the checks and balances the Indian democracy is proud of, the post is also seen as the one that is often able to exercise authority in contravention of an elected government.

The article talks about key measures that could have mitigated the traumatic fallout of the pandemic in India.

3. Lend a helping hand to children the right way

The second wave of the COVID-19 pandemic has left many children orphaned and vulnerable in India.

Read: “How to adopt a child legally” covered in 12th May 2021 Comprehensive News Analysis.

Many options to help

Article 39 of the Constitution prohibits the tender age of children from being abused. Therefore, orphaned children who have lost both their parents or abandoned or surrendered due to the COVID-19 pandemic must not be neglected and left to face an uncertain future. They must be taken care of by the authorities entrusted with responsibilities under the JJA.

The delay in setting the refund rates for taxes paid on exported goods as per the Remission of Duties and Taxes on Exported Products (RoDTEP) scheme has been affecting exporters’ pricing strategies.

Read more on Remission of Duties and Taxes on Exported Products.

With the second wave of COVID-19 sweeping across the rural heartland of Odisha, infections are being reported among the Particularly Vulnerable Tribal Groups (PVTGs).

Which of the above has/have been categorised as critically endangered by the International Union for Conservation of Nature (IUCN)?