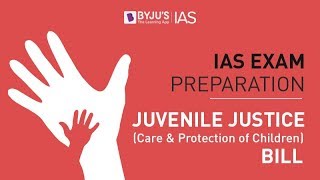 Salient Provisions of the JJA, 2015

Given below are a few salient points about the Juvenile Justice Act:

Reasons for amending the 2000 Act:

History of Legislation concerning Children in Conflict with the Law

The JJA, 2015 introduced many changes to the existing law based on the requirements of the day in terms of reforming the laws and making the juvenile justice system more responsive to the changing circumstances of society. The Act seeks to hold the child accused of crime accountable, not through punishments, but through counselling.

Given below are links to other important Acts, policies, organisations and initiatives taken for the welfare of children. UPSC aspirants can refer to the links below for exam preparation:

Who is a Juvenile?

As per law, a juvenile is any individual below the age of 18.

There are many positives in the 2015 JJA. It was enacted to correct the deficiencies in the previous legislation. Some of the important benefits of this Act are:

The amended JJA also has certain negatives associated with it. Some of the problems in the law are discussed below.

Prevention is better than cure. There is a need to ensure that children do not turn to crime at all, in the first place. Also, minors who do get into crime should be held accountable depending on the circumstances. Rehabilitation is of utmost importance to avoid children in conflict with the law from becoming future liabilities for society.

Who is a child under the Juvenile Justice Act?

Any individual under the age of 18 is a child.

In India, No. In addition, as per Section 83 of the IPC, “Nothing is an offence which is done by a child who is above 7 years of age and under 12 who has not attained the sufficient maturity of understanding in order to judge the nature and consequence of his act on that particular occasion.”