The U.S.-led United Nations Command (UNC) said both North and South Korea violated the armistice agreement that ended the 1950-53 Korean War and governs their shared border, when their troops exchanged gunfire on May 3, 2020.

1. ‘No WHO bar on India testing HCQ as preventive’

The World Health Organization (WHO) said that it had temporarily suspended clinical trials of hydroxychloriquine as a potential treatment for COVID-19 being carried out across a range of countries as a precautionary measure.

Prime Minister Narendra Modi reviewed the current situation on the Line of Actual Control (LAC) and the ongoing standoff with China, with the National Security Adviser, the Chief of Defence Staff (CDS) and the three Service Chiefs. The meeting comes a day before the biannual Army Commanders conference.

Read more about Shekatkar Committee covered in 18th May 2020 PIB Summary and Analysis.

Amid concerns over privacy of data being collected by Aarogya Setu – the COVID-19 contact tracing app, the government said it was open-sourcing the application.

Details on Aarogya Setu app and the issues associated with it have been covered in 21st April 2020 Comprehensive News Analysis. Click here to read.

The huge locust swarms, which appeared in the skies of Jaipur, were killed in Rajasthan’s Dausa district with the spray of high-intensity insecticide by the Agriculture Department officials.

Read more about Locust Swarms in the linked article.

1. Fisheries scheme has no relief component

Detrimental to consumers and companies:

1. How India can become self-reliant

1. A time for reform in courts

Suggestions to improve functioning of the judiciary:

Hastening the process of appeals:

The Border Roads Organisation (BRO) has achieved a milestone in the construction of a 440-m tunnel under Chardham Pariyojana, below the densely-populated Chamba town on National Highway 94 in Uttarakhand.

This topic has been covered in 26th May 2020 PIB Summary and Analysis. Click here to read.

There are 10 important species of locusts in the world. Only four species viz. Desert Locust (Schistocerca gregaria), Migratory Locust (Locusta migratoria), Bombay Locust (Nomadacris succincta) and Tree locust (Anacridium sp.) are found in India. The desert locust is the most important pest species in India as well as in intercontinental context. 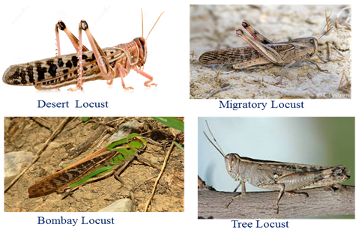 Some of the recommendations of the Shekatkar Committee include the following: