The pandemic has changed the world and its order, a world which was earlier grappled with issues like climate change, poverty, migration, terrorism, nuclear weapons have kept everything else on the back burner. The health emergency and its ramifications are at the centerstage. This unprecedented situation worldwide has redefined the international relations and the role India would play in the years to come.

Gandhiji in 1924 wrote, “My ambition is nothing less than to see international affairs placed on a moral basis through India’s efforts.” He believed that there was no limit to extending our services to our neighbours across state-made frontiers. “God never made these frontiers.” He wrote in ‘Young India’ in 1925, “It is impossible for one to be internationalist without being a nationalist.”

Chapter 2: Indian Foreign Policy in the Times of the Pandemic

The current international environment is challenging. We are living through the greatest shock to the international system since the Second World War. What began as a health emergency has expanded into an economic disruption, a geo-political shock and a social challenge of unprecedented magnitude.

India’s assistance to countries in the wake of the pandemic

India’s engagement with other countries

Our engagement with Africa, both in political and economic terms, has also intensified.

India in the Global Community

In this fast-evolving environment, Indian diplomacy has shown the necessary agility and adaptability to effectively respond to the emerging challenges, while also cementing India’s credentials as a responsible and constructive member of the global community.

While the Covid-19 pandemic has led to serious economic disruptions in India, it may also prove to be a propitious geopolitical moment for India.

Changes brought forth by the pandemic

Due to concerns about China and its selfish and unilateral exercise or power, countries want India to succeed and serve as a countervailing presence to China. There could be a significant flow of capital, technology & advanced knowledge to India if an efficient and congenial economic and regulatory environment could be put in place. The size of the Indian market is an asset as is its political stability and democratic traditions.

India is the only country which in terms of its size, its population, its economic potential and proven scientific and technological capabilities and its rich civilizational legacy, can not only match but surpass China. But then, we need a strong national will to reach out for this goal.

India’s trade negotiating approach would need to take a broader long-term view of things to come in future. Increasing volume of trade is more important than trade deficit because trade need not be a zero-sum game. India should consciously develop a wide-angle approach to the evolving global trade dynamics. Since ancient times, Indians were enduring traders.

Understanding the evolving linkages between trade, investment, services and technology, and GVCs is critical. India should consciously develop a wide-angle approach to these evolving global trade dynamics.

The last few years were not good for trade due to trade tensions primarily between the USA and China and consequent rise in protectionist measures. The Covid-19 pandemic has disrupted the global economy and world trade, as production and consumption shrunk across the globe.

Reasons for the Growth of World Trade

These are discussed in the below section:

Ease of Doing Business and IT Initiatives

The government will soon introduce the Remission of Duties or Taxes on Export Product (RoDTEP) scheme.

India follows an open trade policy where most products can be imported without prior permission on payment of import duty. The import duties are within the ceiling limits agreed at the WTO.

Chapter 6: WTO: The Road Ahead

The WTO plays an important role in providing an overarching and common framework of multilateral rules for conducting international trade among its members.

The functions of the WTO are five-fold. 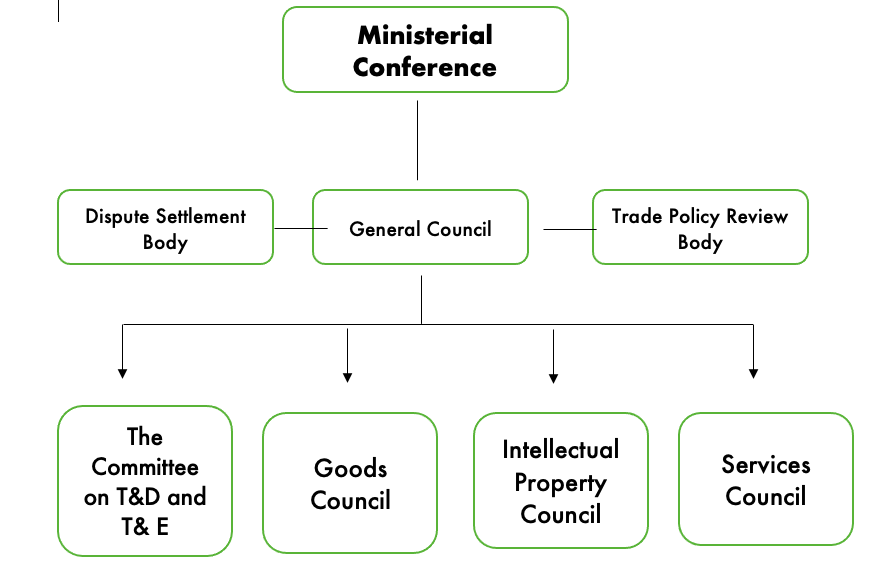 In a world of increasing inter-dependence among nations in commercial and economic relations, international trade cannot be conducted efficiently without a common set of rules applicable to a large number of countries.

The US-India dispute over H-1B visas can be traced to the significant relationship between the two countries post 2000 in services trade, especially in software services and the predominance of Indian IT professionals in H-1B visas issued by the US. Due to change in immigration and labour market regulations on visa caps and fees, necessity tests, recognition of equalisations, and other discretionary policies, India faces growing mode-4 related challenges which affect cross border mobility of its service providers.

There is a huge significance of mode 4 in India-US services trade, especially in IT services.

Overview of the Dispute

Significance of Mode 4 in India-US Trade

Specifies of the Dispute

Meanwhile, over the past year, several changes have been proposed to further restrict H-1B and L-1 visas, which is a matter of concern. Given the economic contraction in the US, the H-1B visa program is likely to see continued protectionist challenges in the near future and India must be prepared for the same. India will have to continue emphasising the importance of transparent, non-discretionary, and predictable policies for non-immigrant visas in the US, through industry associations and government-to-government dialogues. The issue must also be brought up in discussions for a Limited Trade Deal.

India’s rising global profile is reshaping New Delhi’s approach to its major partnerships in the changing global order. India is charting new territory in its foreign policy on the premise that rather than proclaiming non-alignment as an end in itself, India needs deeper engagement with its friends and partners if it is to develop leverage in its dealings with its adversaries and competitors.

New Delhi is showing signs of pursuing strategic autonomy separately from non-alignment. This separation is overdue in India’s foreign policy, and the country stands to benefit from leveraging partnerships rather than shunning them. India is today well-positioned to define its bilateral relationships on its own terms without ideological crutches.

This chapter explores the dynamics of India’s relations with its two northern Himalayan neighbours, Nepal and Bhutan.

Cooperation in water resources has the highest potential for mutual benefit and ushering in an era of development and prosperity in Nepal, but remains constrained by over-politicisation and constitutional and policy provisions.

The India-Nepal Treaty for Peace and Friendship, 1950 marked the commencement of close bilateral economic and security cooperation.

The Treaty of Perpetual Peace and Friendship between India and Bhutan was concluded on August 08, 1949 during the rule of King Jigme Wangchuck. It was premised on shared security interests. The treaty was updated by the India-Bhutan Treaty of Friendship signed on February 08, 2007.

The perception of India’s aid programmes has been very different in the two countries. In both the countries, Indian assistance was premised on shared security interests and economic development was seen as a sine qua non for close friendly relations. India’s development diplomacy assumed that what is good for Nepal and Bhutan is good for India.

Cooperative bilateralism infused Bhutan’s approach and the lack of it in the case of Nepal.

The evolving nature of the strategic landscape in the backdrop of actions of an aggressive and assertive China has unnerved both its oceanic and land neighbours. Covid-19 has been another game-changer in redrawing strategic, economic, political and diplomatic relations. China by its aggressive actions along the LAC has complicated matters for bilateral relations but it has also made India consolidate its views on the future of relations with China.

Three decades after the ‘Look East’ was changed, it is clear that it has been a mixed bag of success and failures. The present Government decided to give a new thrust to the “Look East Policy” by saying that we need to act east and accelerate the process of economic engagement.

Opportunity Out of a Crisis

Actions in South China Sea and Near Seas

Acting East in the Backdrop of China’s Intransigence

There would be global readjustments whether it is in terms of decoupling or having new alliances to take on China which has not behaved with the maturity expected of a nation aspiring to replace the USA. India now has the opportunity to redraw the contours of its engagement with other countries and institutions and draw an independent trajectory that would help its growth, prosperity and development.

There is ample scope for the relations between India and Russia to go deeper than what they presently are. Apart from the avenues of cooperation that exist at multilateral levels like the SCO, BRICS, RIC and G-20, there is a need for more bilateral engagements and cooperation in the outer space, cybersecurity, counter-terrorism measures, exploring the Arctic region besides many new areas of mutual interest.

India and Russia Relationship during the Soviet Era

India-Russia Relationship during the Last Decade

There is ample scope for the relationship between India and Russia relations to go deeper than what they presently are. Both countries should work towards creating more interconnectedness through working on the transportation links like INSTC, using of the Chabahar port to transport goods to Afghanistan and Central Asia. India’s participation in the development of Russia’s far east is another area which warrants attention. A long and sustained relationship cannot be sustained merely on the legacy of the past and defence deals.

West Asia occupies a pivotal position in international relations, because of its geographical location and close proximity to South and Central Asia, Europe, and Africa. India has followed a policy of nurturing bilateral ties with all the countries in the region best serving and enhancing its national interests.

Significance of this region

India has followed a policy of nurturing bilateral ties with all the countries in the region, without getting entangled in their ideological or sectarian fault lines, best serving and enhancing its national interest.

The overseas Indian community has grown into an energetic and confident diaspora of over 25 million. The Indian diaspora is very vital to India’s success and the foreign policy of India has a strong outreach to the Indian diaspora.

The 21st-century global-knowledge society has now necessitated redefining the whole concept of internationalisation of higher education with regards to its impact on policy and practice as more and more countries engage in the process. One can clearly see a strategic shift towards promoting borderless education in higher education.

One of the significant aspects in the post-economic liberalisation was the signing of the General Agreement on Trade in Services (GATS) under the WTO in 1995, which identifies education as a ‘service to be liberalised and regulated by trade rules.’

The government must ensure a strong ecosystem of internationalisation across the length and breadth of the country.

The “Study in India” program needs to be executed strategically on a mission mode by engaging relevant stakeholders. Key recommendations for its effective implementation are:

The Union Cabinet approved setting up of the NRA on August 19, 2020, with the vision of creating a specialist body, bringing state-of-the-art technology and best practices to the field of Central Government recruitment. It is a path-breaking reform with far-reaching benefits for millions of job aspirants in the country.

Replication of huge financial, infrastructural and other resources delays their exam cycles inordinately, harming both the candidates as well as the departments where vacancies are not filled up for a long time.

NRA is coming up at an opportune time when the conventional government recruitments are transforming with the help of technology. In the past few years, various Recruitment Agencies have embarked upon a number of digital solutions to improve outreach, speed, transparency and security of examinations.

Some of the initiatives and improvements are listed here:

NRA comes with path-breaking reforms which will help crores of aspiring youth aspiring to embark on a new career path.