Geography is an important part to be studied to cover UPSC Syllabus. Here, we are giving information on Wind System. The information that aspirants will get out of this article will be useful in the Geography segment of the IAS Exam.

The wind is the horizontal movement of air caused by:

As a result of this uneven heating, there are bound to be earth surfaces that vary a lot in temperature. Air on surfaces with higher temperatures will then begin to rise because it is lighter (less dense). As the air rises, it creates low atmospheric pressure. Air on surfaces with cooler temperatures sink (do not rise). The sinking creates higher atmospheric pressure. This behaviour or warm gases or liquids moving upward and being replaced by cooler particles is called Convection. The energy moving during convection is called convectional current.

To know how Cyclones are formed through high-pressure winds, visit the linked article.

A good example is how a tropical depression forms, where warm air over hot tropical waters rise, and high-pressure cold air quickly rushing to fill the space.

Local winds are those that are created as a result of scenery such as mountains, vegetation, water bodies and so on. They can move from mild to extreme winds in just hours. Good examples of local winds are sea breezes and land breezes, and mountain and valley breezes. Local winds cover very short distances.

They are really large air masses that are created mainly as a result of the earth’s rotation, the shape of the earth and the sun’s heating power.

This is the belt extending as far as 30° north and south latitude of the Inter-Tropical Convergence Zone (ITCZ).

This is the belt extending from 30° to 60° latitude from the ITCZ.

This belt covers from 60° latitudes to the north and south poles.

It is an apparent force caused by the earth’s rotation. The Coriolis force is responsible for deflecting winds towards the right in the Northern Hemisphere and towards the left in the Southern Hemisphere. This is also known as ‘Ferrel’s Law’.

As the winds blow from the north and south towards the equator, their flow path is deflected by the earth’s rotation. When moving objects are viewed in a reference frame, their path looks curved. This is the Coriolis Effect, and it is simply caused by the earth’s rotation. This effect makes wind systems in the southern side of the equator (southern hemisphere) spin clockwise and wind systems in the northern side (north hemisphere) spin counter-clockwise. 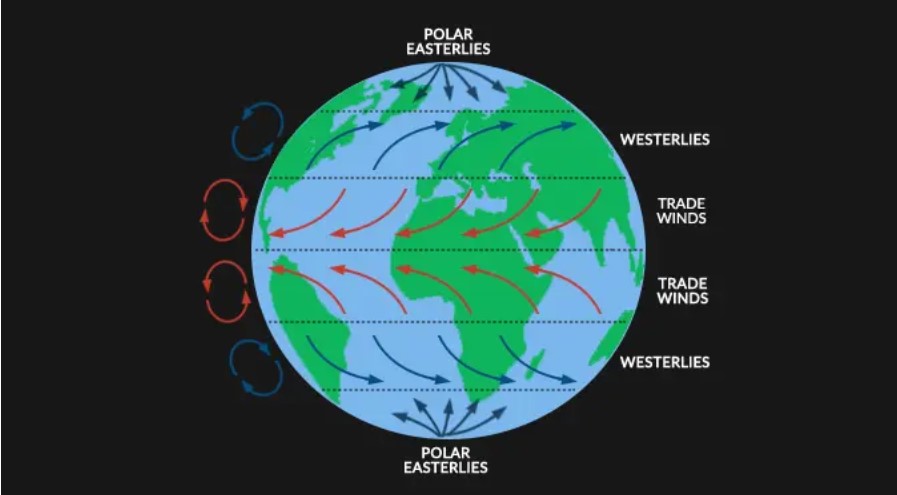 Winds come in all directions or speeds. They are measured by their directions and speeds.

Depending on the cause of the winds, they can blow in many directions. Some good examples of wind direction are the Easterly winds, which blow from east to west, and westerly winds which blow from west to east. There are also winds that blow from the north, southwards and also those from the south blowing northwards.

Anemometers measure the direction of winds.

Another instrument in wind measurement is the wind vane.

This is simply a term used for winds that are most frequent in its’ direction and speed over a specific geographic region. Different geographic areas have different prevailing winds because of the factors that shape them.

Eg:  the trade winds, the westerlies, and the polar easterlies.

These are a narrow belt of high altitude (above 12,000 m) westerly winds in the troposphere. Their speed varies from about 110 km/h in summer to about 184 km/h in winter. A number of separate jet streams have been identified. The most constant are the mid-latitude and the sub-tropical jet stream.

In 1805, a British Naval Officer invented this scale to measure wind force. The scale has a read of 0 up to 12 to classify wind force.

The above details would be of help to candidates preparing for UPSC exams this year. You can know more about the topics asked in the exam by visiting the UPSC Syllabus page and also refer to the links given below for more articles.