BYJU’S provides the easiest and simplest NCERT Solutions for Class 12 Biology to the Chapter Ecosystem. An ecosystem can be described as a functional unit wherein living entities interact amongst themselves and with their surroundings – the physical environment. Learn more in detail by downloading the NCERT Solutions for Class 12 Biology Chapter 14 PDF from the link provided below. 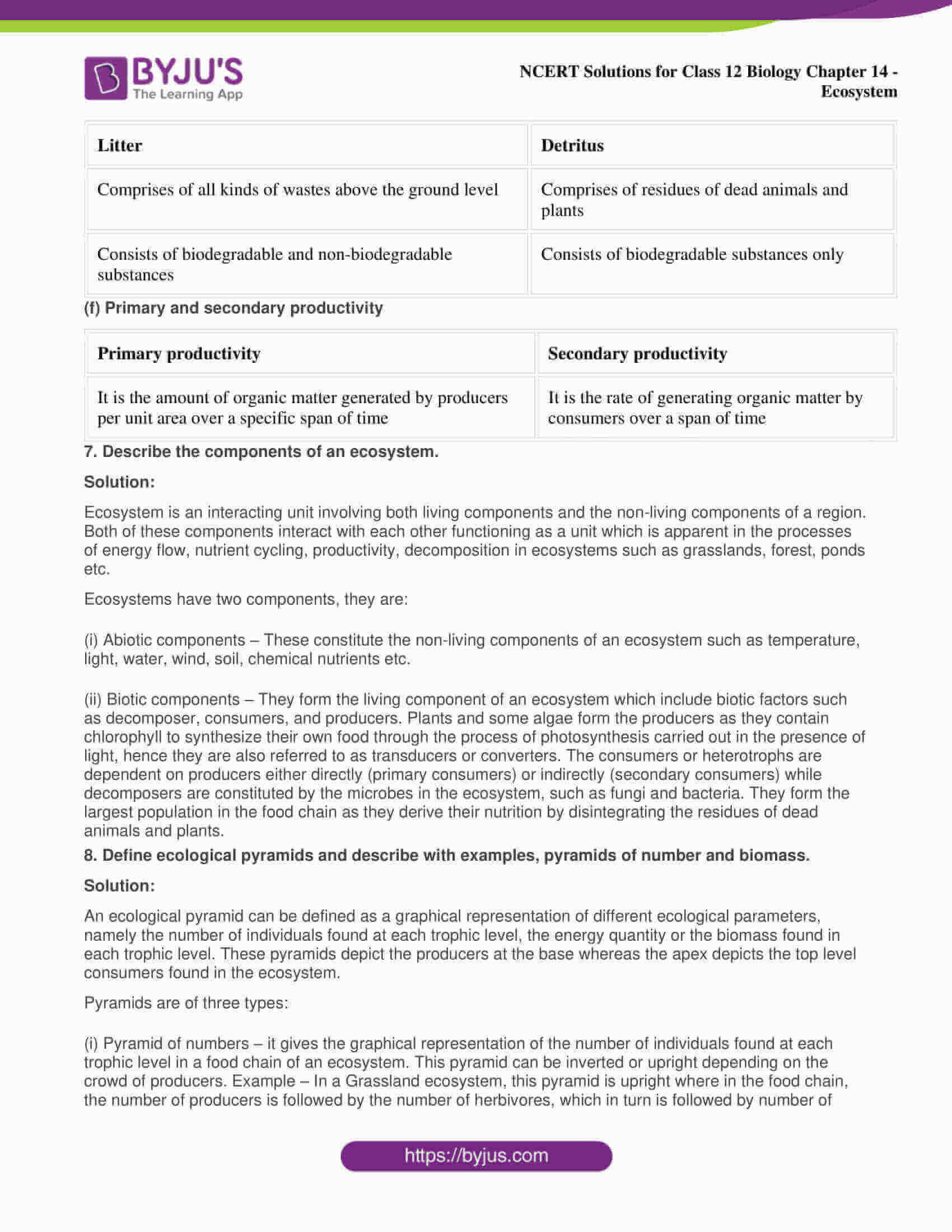 (c) In aquatic ecosystems, the limiting factor for the productivity is_________.

Plants are called as autotrophs because they fix carbon dioxide

In an ecosystem dominated by trees, the pyramid (of numbers) is inverted type.

In aquatic ecosystems, the limiting factor for the productivity is light.

Common detritivores in our ecosystem are earthworms.

The major reservoir of carbon on earth is oceans.

2. Which one of the following has the largest population in a food chain?

Decomposers form the largest population in food chain. They include microbes such as bacteria and fungi, that derive their nutrition by disintegrating the remains of animals and dead plants.

3. The second trophic level in a lake is

Zooplankton forms the second trophic level in a lake as they are the primary consumers in food chain that is aquatic, feeding upon phytoplankton. Hence, they hold the second level.

There are no secondary producers. Plants are the only producers. They are autotrophs and synthesize their own food through the process of photosynthesis.

5. What is the percentage of photosynthetically active radiation (PAR) in the incident solar radiation?

Photosynthetically active radiation or PAR constitutes about 50% of the total incident solar radiation.

(b) Production and decomposition

(b) Production and decomposition

7. Describe the components of an ecosystem.

Ecosystem is an interacting unit involving both living components and the non-living components of a region. Both of these components interact with each other functioning as a unit which is apparent in the processes of energy flow, nutrient cycling, productivity, decomposition in ecosystems such as grasslands, forest, ponds etc.

Ecosystems have two components, they are:

(i) Abiotic components – These constitute the non-living components of an ecosystem such as temperature, light, water, wind, soil, chemical nutrients etc.

(ii) Biotic components – They form the living component of an ecosystem which include biotic factors such as decomposer, consumers, and producers. Plants and some algae form the producers as they contain chlorophyll to synthesize their own food through the process of photosynthesis carried out in the presence of light, hence they are also referred to as transducers or converters. The consumers or heterotrophs are dependent on producers either directly (primary consumers) or indirectly (secondary consumers) while decomposers are constituted by the microbes in the ecosystem, such as fungi and bacteria. They form the largest population in the food chain as they derive their nutrition by disintegrating the residues of dead animals and plants.

8. Define ecological pyramids and describe with examples, pyramids of number and biomass.

An ecological pyramid can be defined as a graphical representation of different ecological parameters, namely the number of individuals found at each trophic level, the energy quantity or the biomass found in each trophic level. These pyramids depict the producers at the base whereas the apex depicts the top level consumers found in the ecosystem.

Pyramids are of three types: (ii) Pyramid of biomass – it is a graphical representation of the total quantity of living matter found at each trophic level of an ecosystem and can either be inverted or upright. In grasslands and forest ecosystems it is upright as the quantity of biomass at the producer level is higher than at the carnivore level, at the top. This pyramid is inverted in a pond ecosystem as the biomass of fishes far surpass the biomass of zooplankton on which they feed. 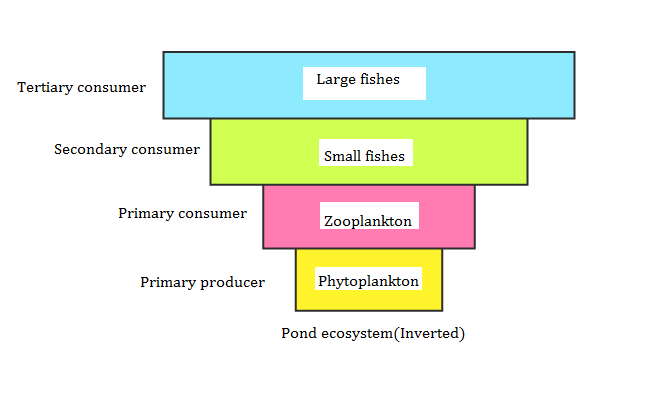 Primary productivity can be defined as the amount of organic matter or biomass that is generated by producers per unit area over a span of time.

It can be affected by factors such as rain, temperature, water, light etc. Primary productivity also depends on the availability of nutrients and that of plants to carry out the process of photosynthesis.

Decomposition can be defined as a process that involves the disintegration of complex organic matter from the body of dead animals and plants with the action of decomposers into inorganic raw materials such as water, carbon dioxide and other such nutrients. The different processes in decomposition are as follows:

(i) Fragmentation – It is the first phase in the decomposition process, it includes the disintegration of detritus into fine particles through the action of detritivores such as earthworms.

(ii) Leaching – here, the water-soluble nutrients penetrate into the layers of soil and get sealed as unavailable salts

11. Give an account of energy flow in an ecosystem.

In an ecosystem, energy enters from the ultimate source of energy – the Sun. These solar rays pass through the atmosphere to be absorbed by the surface of the earth, which help plants in performing photosynthesis. Additionally, they also help in maintaining the temperature of the earth so that living entities survive. Some of these incident rays are reflected by the surface of the earth and only close to 2-10% of the solar energy is captured by the producers (green plants) during the photosynthesis process in order to convert it into food.

Gross primary productivity is the rate at which the biomass is generated by plants during the process of photosynthesis. Just 10% of the stored energy is transferred to herbivores from the producers when plants are consumed by herbivores. The rest of 90% of the energy is used for different processes by plants such as growth, respiration and reproduction. Likewise, a mere 10% of the energy of herbivores is conveyed to carnivores. This is referred to as the ten percent law of energy flow.

12. Write important features of a sedimentary cycle in an ecosystem.

Sedimentary cycles have reservoirs in the crust of earth or rocks. Nutrient elements such as phosphorus, sulphur, potassium and calcium are present in the sediments of the earth. These sedimentary cycles are unhurried, and slow. It takes a long time to complete their circulation and are deemed to be less perfect cycles. It is because when recycling, the nutrient elements may get sealed in the reservoir pool taking a long time to come out and continue circulation. Hence, they typically go out of circulation for a long period of time.

13. Outline salient features of carbon cycling in an ecosystem.

The carbon cycle is an essential gaseous cycle which has its reservoir pool in the atmosphere. All of the living entities consist of carbon as a major constituent of the body. This carbon is a basic element present in all the living forms. Biomolecules such as lipids, carbohydrates, proteins etc that are crucial for life processes are made of carbon. Living forms are incorporated with carbon through the basic process of photosynthesis that is carried out by plants, the primary producers. The process of photosynthesis uses up atmospheric carbon dioxide and sunlight to produce a carbon compound known as ‘glucose’, this in turn is used by other living entities. The Chapter’s NCERT Solutions provides insights into the structure of the ecosystem, transfer of energy through the food chain, nutrient cycle and the output through degradation and energy loss. Also discussed are relationships such as chains, cycles, webs that are produced as a result of these energy flows inside the system and their inter-relationship.

NCERT Solutions for Class 12 Biology Chapter 14 – Ecosystem is classified under the Ecology Unit. The Unit, Ecology holds 14 marks as per previous trends, on the whole, consisting of the following chapters:

Students need to thoroughly revise and practise from these chapters in order to get 14 marks.

Key concepts covered in this Chapter are given below:

Students can also access the NCERT Solutions for other classes (1 – 12) and subjects for free. These solutions are exclusively created by subject experts at BYJU’S in an easy-to-understand format.

Can students rely on the NCERT Solutions for Class 12 Biology Chapter 14 from BYJU’S?

The NCERT Solutions for Class 12 Biology Chapter 14 from BYJU’S are designed with the main aim of helping students to focus on the important concepts. Each and every minute detail is explained with utmost care to improve the conceptual knowledge among students. The solutions also contain various shortcut techniques which can be used to remember the concepts effectively. Students can refer to the solutions while answering the textbook questions and understand the method of answering them without any difficulty.

What are the topics covered under the Chapter 14 of NCERT Solutions for Class 12 Biology?


Where can I get the accurate solution for NCERT Solutions for Class 12 Biology Chapter 14?

At BYJU’S you can get the accurate solution in PDF format for NCERT Solutions for Class 12 Biology Chapter 14. The NCERT Textbook Solutions for this Chapter have been designed accurately by Biology experts at BYJU’S. All these solutions are provided by considering the new pattern of CBSE, so that students can get thorough knowledge for their exams.