Looking for NCERT Solutions for Class 12 Biology Chapter 6 Molecular Basis of Inheritance? Look no further as BYJU’S offers solutions to all the chapters of NCERT Solutions for Class 12 Biology in detail here according to the latest term-wise CBSE Syllabus 2021-22. This chapter provides students with insights into the structure of DNA, its replication, the process of synthesizing RNA from DNA (transcription process), the genetic code which determines the sequences of amino acids in proteins, the phenomena of protein synthesis and the elementary basis of their regulation.

Also, with the help of NCERT Solutions for Class 12 Biology students can understand other subsequent sections like why DNA is the most abundant genetic material, and what its relationship is with RNA. Towards the end, the chapter also discusses the essentials of human genome sequencing and its consequences. Access the NCERT Solutions for Class 12 Biology PDF of this chapter from the link given below. 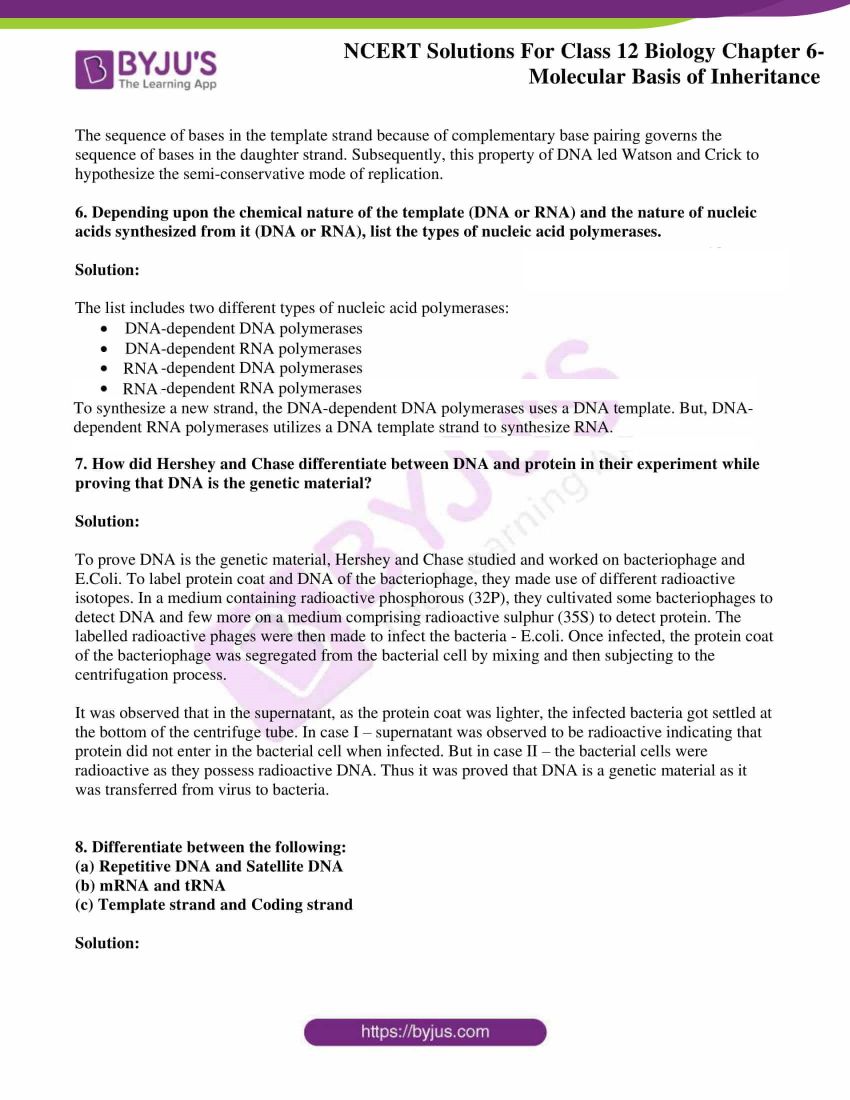 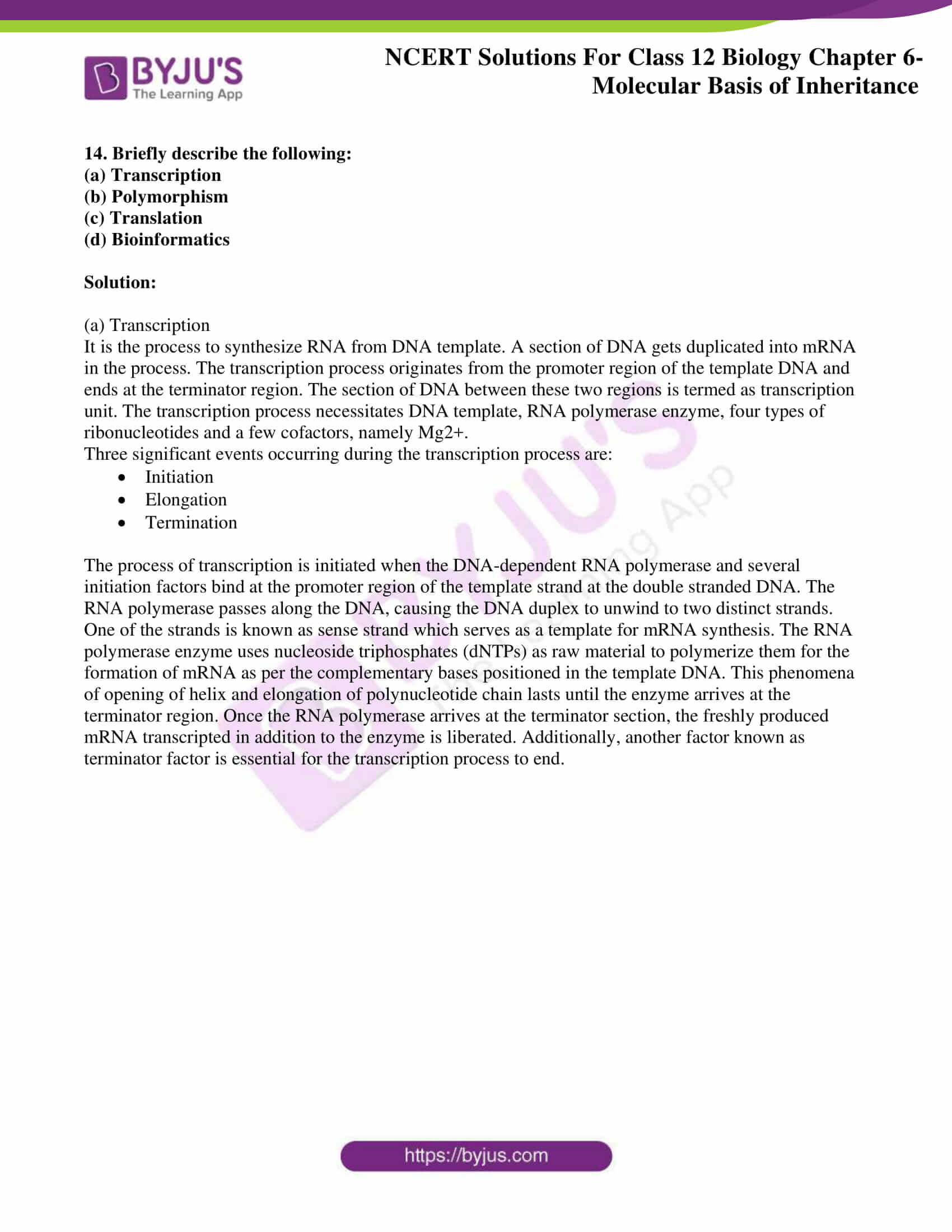 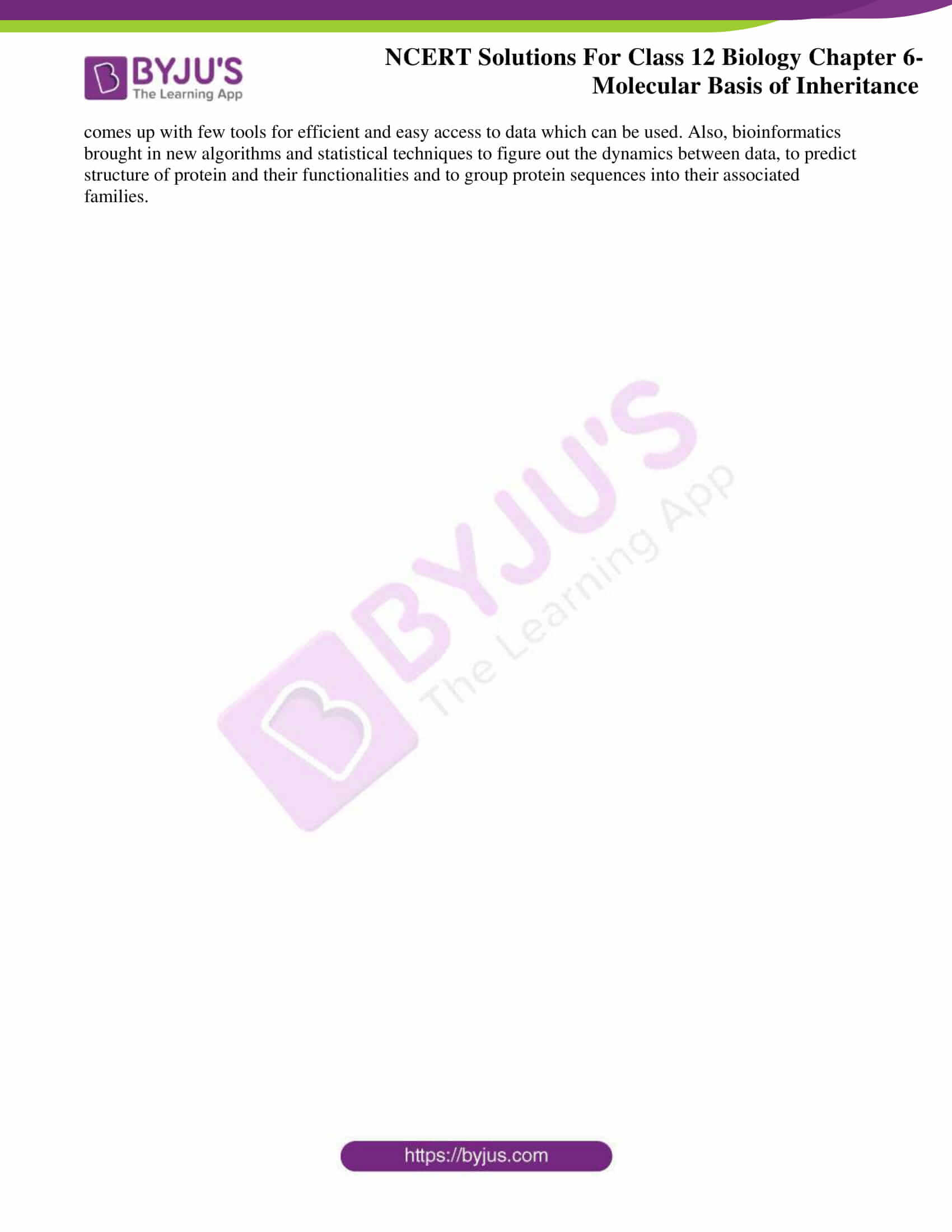 1. Group the following as nitrogenous bases and nucleosides:

Following is the grouping:

2. If a double stranded DNA has 20 per cent of cytosine, calculate the percent of adenine in the DNA.

As per Chargaff’s rule, DNA molecules are required to have an equal ratio of purine(adenine and guanine) and pyridine(cytosine and thymine). This is to say that the number of adenine molecules is equivalent to the cytosine molecule.

Hence, according to the law, if the double stranded DNA has 20% of cytosine, it should have 20% of guanine. Therefore, the percentage of G + percentage of C = 40%

The other 60% indicates both A + T percentage molecule. As adenine and thymine is always found in equal numbers, the adenine content is 30%.

3. If the sequence of one strand of DNA is written as follows:

Write down the sequence of complementary strand in 5’→3′ direction.

With regards to base sequence, DNA strands are complementary to each other. Therefore, if the sequence of one strand of DNA is written as:

The sequence of the complementary strand in 3′ -> 5′ is as follows:

Subsequently, sequence of complementary strand in 5’→3′ direction is written as:

4. If the sequence of the coding strand in a transcription unit is written as follows:

Write down the sequence of mRNA.

In a transcription unit, if the coding strand is as follows:

Then the sequence which codes for nothing is the same as mRNA except that in mRNA, uracil replaces thymine. Hence, the mRNA sequence is as written below:

Watson and Crick noted that the two DNA strands are anti-parallel, complementary to each other with regards to their base sequences which facilitates each strand to serve as a template to synthesize a new strand. This organization of the DNA molecule furthered the hypothesis that replication of DNA is semi-conservative. In other words, the double stranded DNA molecule splits and inturn each of the separated strand serves as a template to synthesize a new complementary strand. Subsequently, each DNA molecule will have one parental strand and a newly synthesized daughter strand. As only one parental strand is conserved in each of the daughter molecule, the mode of replication is termed as semi-conservative.

7. How did Hershey and Chase differentiate between DNA and protein in their experiment while proving that DNA is the genetic material?

It was observed that in the supernatant, as the protein coat was lighter, the infected bacteria got settled at the bottom of the centrifuge tube. In case I – supernatant was observed to be radioactive indicating that protein did not enter in the bacterial cell when infected. But in case II – the bacterial cells were radioactive as they possess radioactive DNA. Thus it was proved that DNA is a genetic material as it was transferred from virus to bacteria.

8. Differentiate between the following:

(a) Repetitive DNA and Satellite DNA

(b) mRNA and tRNA

(a) Repetitive DNA and Satellite DNA

(b) mRNA and tRNA

Two essential roles of ribosome during translation are:

10. In the medium where E. coli was growing, lactose was added, which induced the lac operon. Then, why does lac operon shut down some time after addition of lactose in the medium?

A segment of DNA which comprises of three adjacent structural genes – a promoter gene, an operator gene, and a regulator gene is known as Lac operon. It is functional in a coordinated manner in order to metabolize lactose into galactose and glucose. Lactose serves as an inducer in lac operon which binds to the repressor, inactivating it. Once the lactose is bound to the repressor, RNA polymerase binds to the area of promoter. Therefore, the structural genes express their product, corresponding enzymes are yielded. Lactose is metabolized due to the action of enzymes into galactose and glucose. Later on, the level of inducer decreases as enzymes completely metabolize them which results in the synthesis of the repressor from the regulator gene. Thus, the repressor is bound to the operator gene, restricting RNA polymerase from transcribing the operon, subsequently transcription is ceased. This kind of regulation is termed as negative regulation. 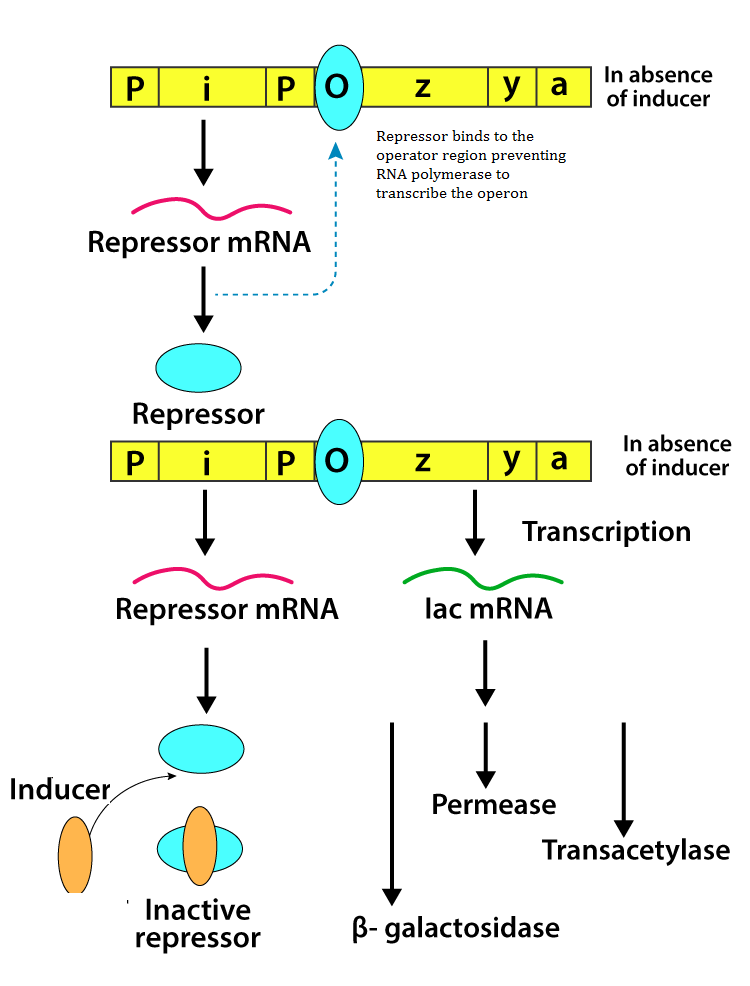 11. Explain (in one or two lines) the function of the followings:

The transfer RNA or tRNA is a small clover shaped RNA which reads the genetic code that is located on mRNA. It conveys particular amino acids to the mRNA ribosome while proteins are translated. Specific tRNAs are present for specific amino acids.

In eukaryotes, these are coding sequences of DNA which transcribe proteins. In between, exons comprise of long non-coding sections of DNA known as introns.

12. Why is the Human Genome project called a mega project?

The Human genome project was ought to be a mega project as the scale and the goals of the project were humongous. It had goals to sequence every base pair located in the human genome which took around 13 years for completion and accomplished in 2003. This large scale project intended to develop new technologies and produce new information in the stream of genomic studies. Subsequently, it unlocked scope for several new areas and possibilities such as in the stream of biotechnology, genetics, medical sciences etc which hints at comprehending different aspects of human biology.

13. What is DNA fingerprinting? Mention its application.

The technique of DNA fingerprinting is helpful in identifying and analyzing variations in different individuals at the DNA level. It is based on the principle of variability and polymorphism in DNA sequences.

Its applications are as follows:

Three significant events occurring during the transcription process are:

The process of transcription is initiated when the DNA-dependent RNA polymerase and several initiation factors bind at the promoter region of the template strand at the double stranded DNA. The RNA polymerase passes along the DNA, causing the DNA duplex to unwind to two distinct strands. One of the strands is known as sense strand which serves as a template for mRNA synthesis. The RNA polymerase enzyme uses nucleoside triphosphates (dNTPs) as raw material to polymerize them for the formation of mRNA as per the complementary bases positioned in the template DNA. This phenomena of opening of helix and elongation of polynucleotide chain lasts until the enzyme arrives at the terminator region. Once the RNA polymerase arrives at the terminator section, the freshly produced mRNA transcripted in addition to the enzyme is liberated. Additionally, another factor known as terminator factor is essential for the transcription process to end. 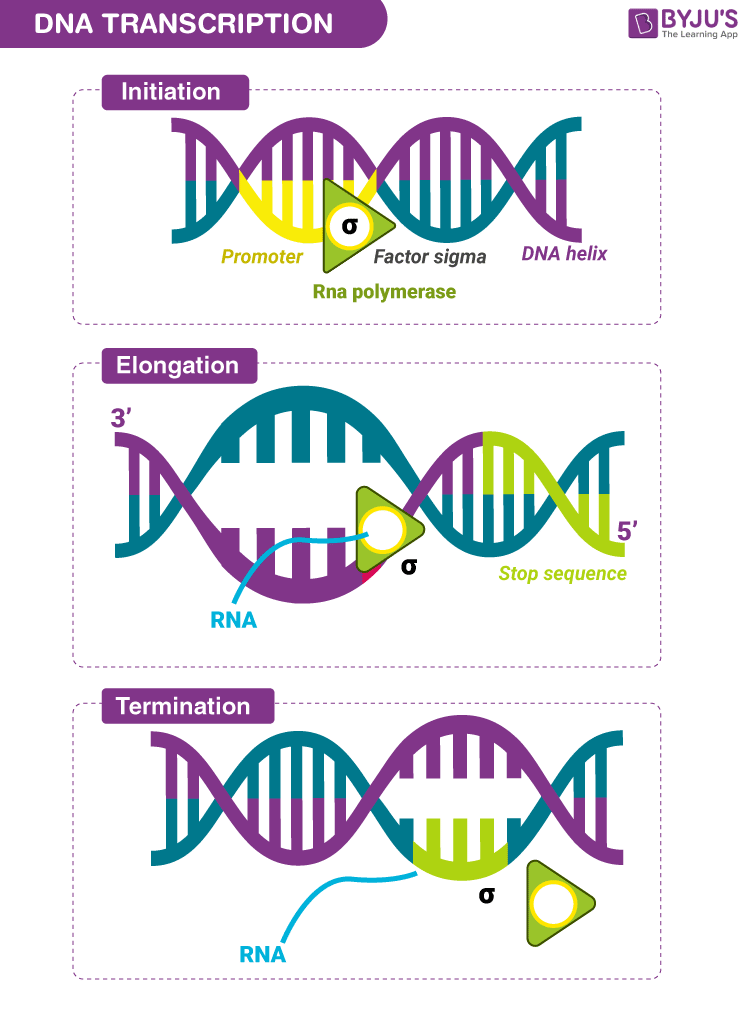 It is a form of genetic variation wherein different nucleotide sequences can be present at different sites in a molecule of DNA. There is a high frequency of this heritable mutation to be observed in a population which emerges as a result of mutation either in the germ cells or somatic cells. The germ cell mutation can be passed from parents to the offsprings which leads to the accumulation of different mutations in a population causing variation and polymorphism in the population. This has a crucial role to play in the evolution and speciation process.

The tRNA gets charged during the initiation of the translation when the amino acids binds to it with the help of ATP. The initiation code – AUG that is located on the mRNA is identified only by the charged tRNA. For the process of translation, the ribosome acts as an actual site, containing two distinct sites in a large subunit to attach to the following amino acids. The smaller subunit of ribosome is bound to the mRNA at AUG (initiation code) subsequently by the large subunit. The process of translation is then said to be initiated.

In the elongation process, the ribosome passes one codon downstream with the mRNA in order to leave some space to bind another charged tRNA. Amino acid brings tRNA which gets linked with the former amino acid via peptide bond. The process continues leading to the formation of a polypeptide chain. When the ribosome arrives, one or more STOP codon (UAA, UGA, and UAG). The phenomena of translation ends, polypeptide chain releases and the ribosomes get detached from mRNA. It is the application of statistical and computational methodologies to the molecular biology stream. It explains practical issues that arise from the analysis and management of biological data. The stream of bioinformatics developed after accomplishing human genome project as huge amount of data was produced during the process which has to be stored and managed for easy access and analysis for later use. Thus, bioinformatics includes creating biological databases which stores huge data of biology. It comes up with few tools for efficient and easy access to data which can be used. Also, bioinformatics brought in new algorithms and statistical techniques to figure out the dynamics between data, to predict structure of protein and their functionalities and to group protein sequences into their associated families.

BYJU’S NCERT Solutions is one of the best among the rest others with its easy understand and precise solutions. The solutions are well researched and structured in a stepwise manner by subject experts at BYJU’S. The NCERT Solutions are available for classes from 1 to 12 and for a wide range of subjects too. Moreover, students can utilize these resources for free.

Can I score full marks using the NCERT Solutions for Class 12 Biology Chapter 6?

Yes, you can score full marks using the NCERT Solutions for Class 12 Biology Chapter 6. The reason why the solutions PDF are important is listed below.
1. The solutions assist students to prepare for the Class 12 term – I exams without fear.
2. The stepwise explanations provided for each question helps students in understanding the concepts effortlessly.
3. The diagrams in each concept promotes visual learning which is important from the exam perspective.
4. The solutions created are crisp and clear as per the first term exams expectations.


Explain the roles of ribosome covered in the Chapter 6 of NCERT Solutions for Class 12 Biology.

Two essential roles of ribosome during translation are:
1. Ribosomes are sites where synthesis of proteins occurs from individual amino acids. It consists of two subunits – larger subunit serves as an amino acid binding site whereas smaller subunit attaches to the mRNA forming a protein synthesizing complex
2. Since a large subunit of ribosome has two different sites to attach to tRNA, it facilitates amino acids to come closer for peptide bond formation. Also, the ribosome behaves as a catalyst for the formation of peptide bonds. Example – 23s r-RNA acts as a ribozyme in bacteria

What are DNA Fingerprinting and its applications covered in the Chapter 6 of NCERT Solutions for Class 12 Biology?

The technique of DNA fingerprinting is helpful in identifying and analyzing variations in different individuals at the DNA level. It is based on the principle of variability and polymorphism in DNA sequences.
Its applications are as follows:
1. To identify potential crime suspects in forensic science
2. Helpful in establishing family and paternity relationships
3. Useful in identifying and preserving the commercial varieties of livestock and crops
4. Useful to discover and know more about the evolutionary history of an entity, thus tracing the linkages between different entities.