NCERT Solutions for Class 6 History Chapter 5 “Kingdoms, Kings and An Early Republic” will provide you the answers to the exercise provided at the end of the chapter. These solutions are useful for the Social Science exam preparation as questions are asked from the NCERT textbook. Referring to these answers will give you more clarity on how to express and represent answers during the exam.

Students can download the NCERT Solutions for Class 6 History PDF below. 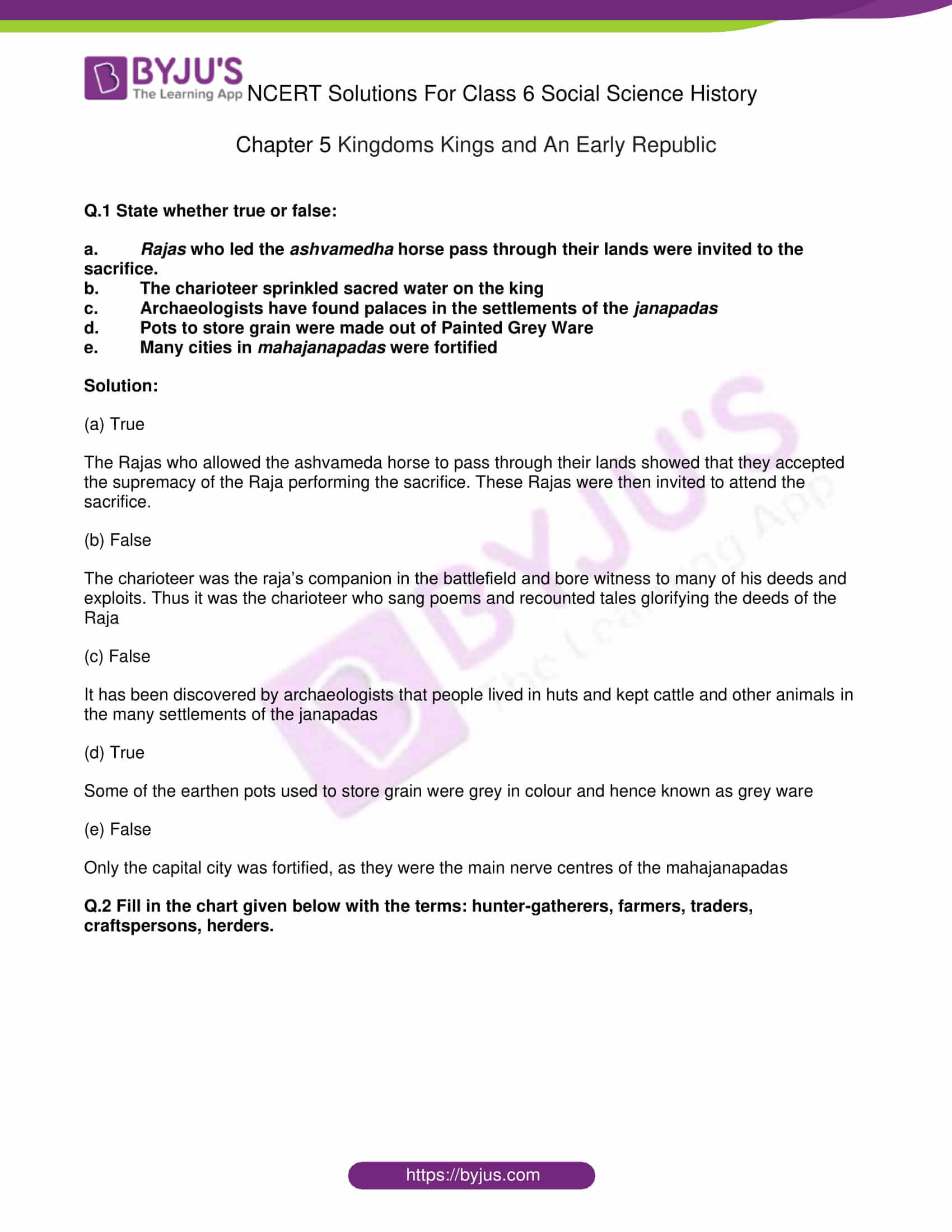 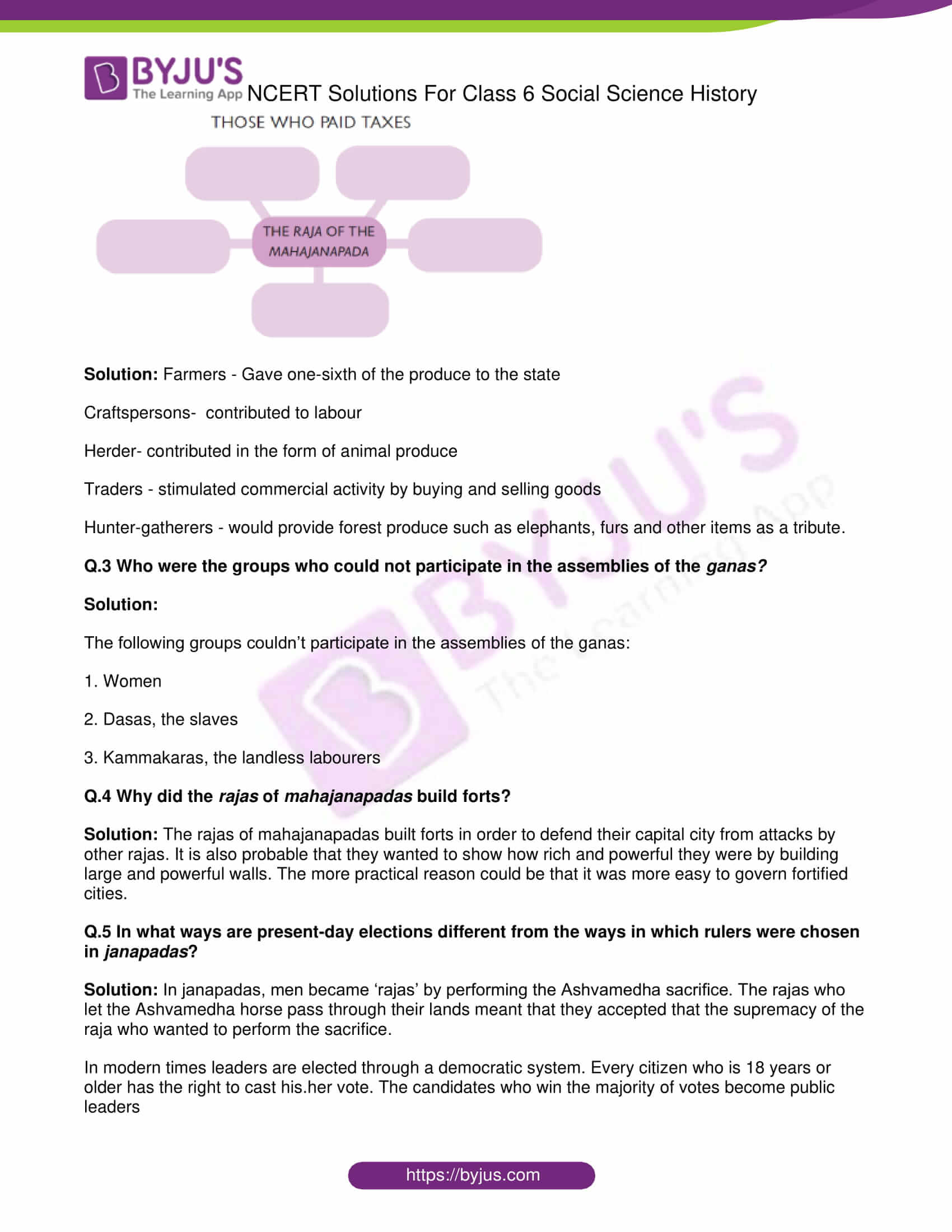 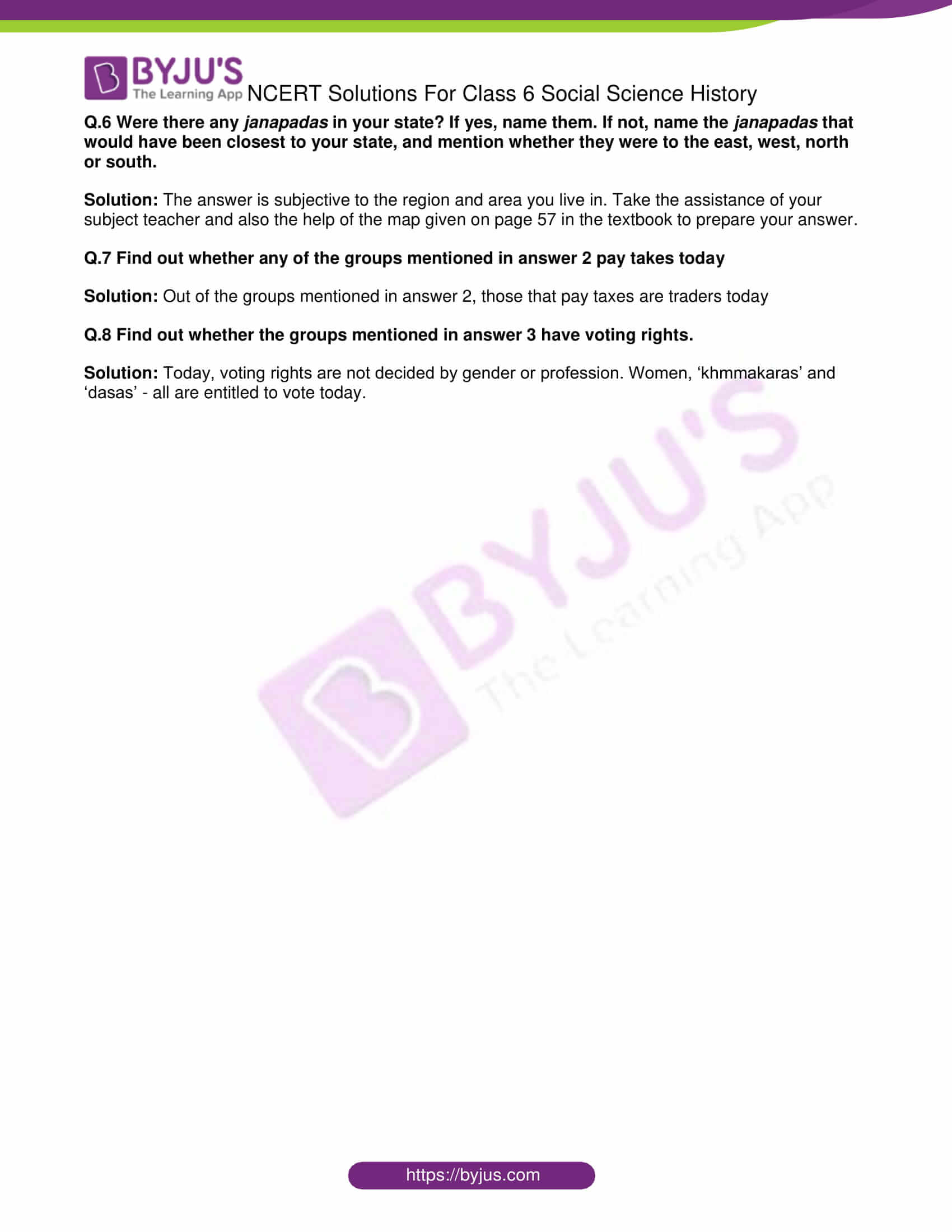 The solutions for chapter 5, Kingdoms, Kings and The Early Republic are given below. Students should also check NCERT Solutions for Class 6 for other subjects.

Q.1 State whether true or false:

The Rajas who allowed the ashvameda horse to pass through their lands showed that they accepted the supremacy of the Raja performing the sacrifice. These Rajas were then invited to attend the sacrifice.

The charioteer was the raja’s companion in the battlefield and bore witness to many of his deeds and exploits. Thus it was the charioteer who sang poems and recounted tales glorifying the deeds of the Raja

Only the capital city was fortified, as they were the main nerve centres of the mahajanapadas

Q.2 Fill in the chart given below with the terms: hunter-gatherers, farmers, traders, craftspersons, herders.

Solution: Farmers – Gave one-sixth of the produce to the state

Herder- contributed in the form of animal produce

Hunter-gatherers – would provide forest produce such as elephants, furs and other items as a tribute.

Q.3 Who were the groups who could not participate in the assemblies of the ganas?

The following groups couldn’t participate in the assemblies of the ganas:

Q.4 Why did the rajas of mahajanapadas build forts?

Solution: The rajas of mahajanapadas built forts in order to defend their capital city from attacks by other rajas. It is also probable that they wanted to show how rich and powerful they were by building large and powerful walls. The more practical reason could be that it was more easy to govern fortified cities.

Q.5 In what ways are present-day elections different from the ways in which rulers were chosen in janapadas?

Solution: In janapadas, men became ‘rajas’ by performing the Ashvamedha sacrifice. The rajas who let the Ashvamedha horse pass through their lands meant that they accepted the supremacy of the raja who wanted to perform the sacrifice.

In modern times, leaders are elected through a democratic system. Every citizen who is 18 years or older has the right to cast his.her vote. The candidates who win the majority of votes become public leaders

Q.6 Were there any janapadas in your state? If yes, name them. If not, name the janapadas that would have been closest to your state, and mention whether they were to the east, west, north or south.

Solution: The answer is subjective to the region and area you live in. Take the assistance of your subject teacher and also the help of the map given on page 57 in the textbook to prepare your answer.

Q.7 Find out whether any of the groups mentioned in answer 2 pay taxes today

Solution: Out of the groups mentioned in answer 2, traders are the ones who pay taxes today.

Q.8 Find out whether the groups mentioned in answer 3 have voting rights.

Solution: Today, voting rights are not decided by gender or profession. Women, ‘kammakaras’ and ‘dasas’ – all are entitled to vote today.

The NCERT Class 6 Our Pasts – I Chapter 5 talks about the following topics:

Students can access the chapter wise answers of the History, Geography and Civics by visiting NCERT Solutions Class 6 Social Science page at BYJU’S.