The Mauryas were a dynasty with 3 important rulers — Chandragupta, his son Bindusara, and Bindusara’s son, Ashoka. King Ashoka, the only King of India to give up violence after winning a war was driven to do so because he was saddened by the aftermath of  violence in the war. He saw that many people were killed and so, decided not to fight any more wars.  NCERT Solutions for Class 6 History Chapter 7 “Ashoka, The Emperor Who Gave Up War” contains the solutions to the exercises given in the book “History – Our Pasts – I”. This page will help you learn the right NCERT Solutions for the exercises provided at the end of the chapter. The solutions will be useful for school exams, as they are sourced from the NCERT textbooks.

Chapter 7 Ashoka, The Emperor Who Gave Up War

Students can download the NCERT Solutions for Class 6 History PDF below.

NCERT Solutions for Class 6 History (History – Our Pasts – I) Chapter 7 Ashoka, The Emperor Who Gave Up War:- Download PDF Here 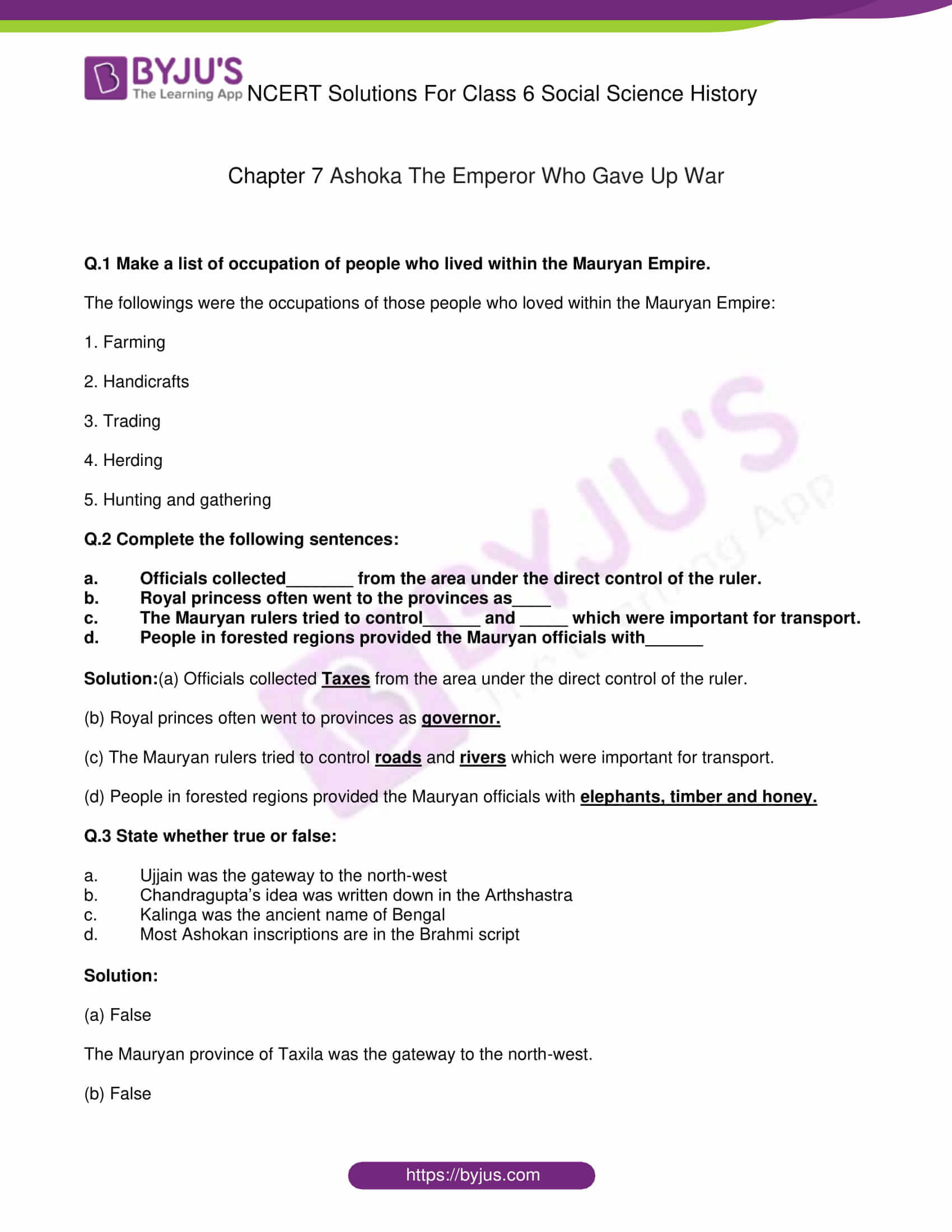 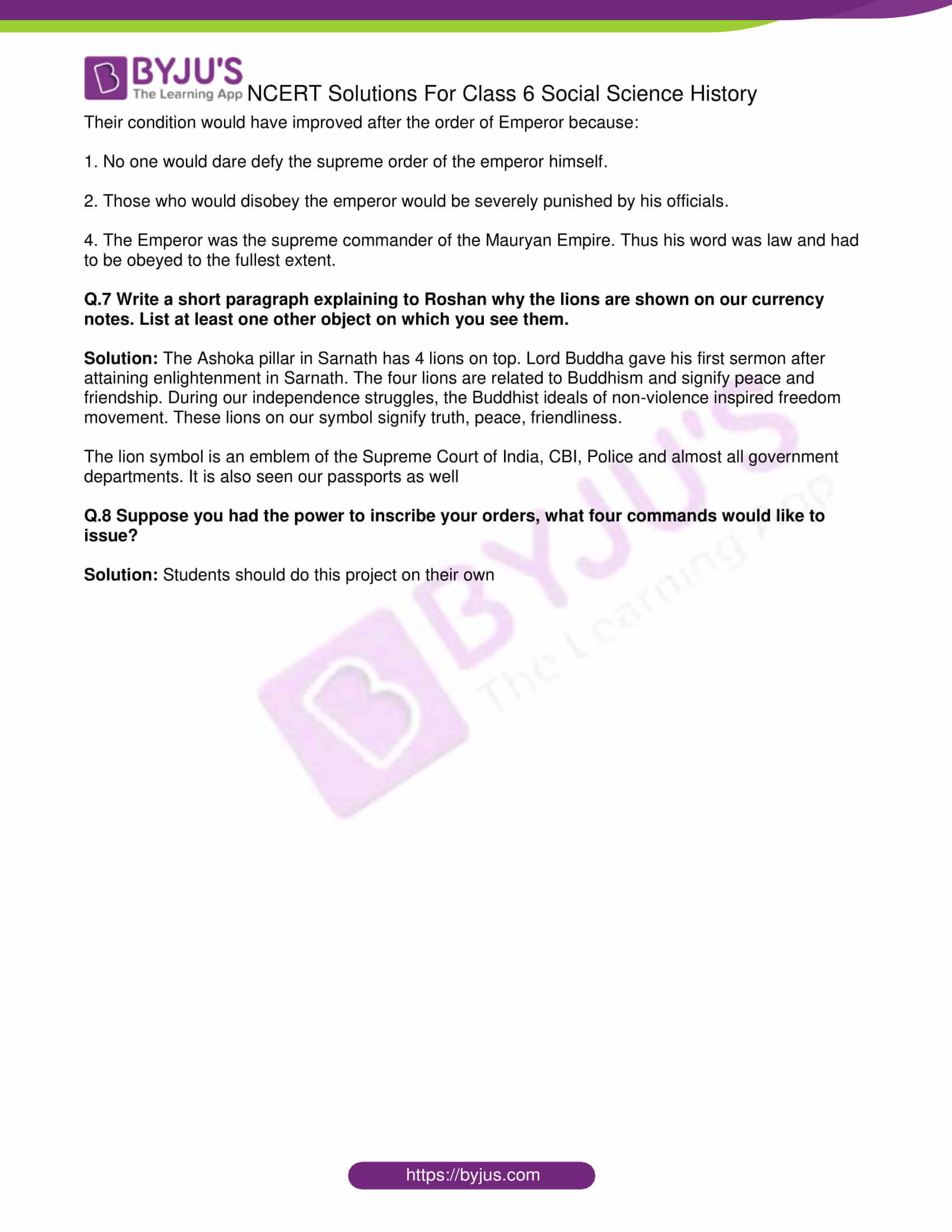 NCERT Solutions for Class 6 History Chapter 7 – Ashoka, The Emperor Who Gave Up War

The solutions for chapter 7, Ashoka, The Emperor Who Gave Up War are given below. Students should also check NCERT Solutions for Class 6 for other subjects.

Q.1 Make a list of occupation of people who lived within the Mauryan Empire.

The following were the occupations of those people who lived within the Mauryan Empire:

Solution:(a) Officials collected Taxes from the area under the direct control of the ruler.

(b) Royal princes often went to provinces as governors.

(c) The Mauryan rulers tried to control roads and rivers which were important for transport.

Q.3 State whether true or false:

The Mauryan province of Taxila was the gateway to the north-west.

Arthashashtra is Sanskrit which means economic science. The Ideas of Kautilya, otherwise knowns as Chanakya, were written down in Arthashashtra.

Kalinga refers to the coastal region between the Godavari and Mahanadi rivers, in what is modern-day Orissa, not Bengal.

Brahmi Script is the parent language of Hindi and many other north Indian languages. Ashokan inscriptions were written in Brahmi script.

Q.4 What were the problems that Ashoka wanted to solve by introducing dhamma?

1.Inter-religious conflicts between his subjects.

3. Ill-treatment of servants and slaves.

NOTE: ‘Dhamma’ is a Prakrit word which means dharma.

Q.5 What were the means adopted by Ashoka to spread the message of dhamma?

Solution: Ashoka adopted the following means to spreads his message of dhamma:

1. He appointed officials called Dhamma Mahamatta who went to different places to spread the message of dhamma.

2. He had his messages inscribed on pillars, so that common folk could read them.

4. Officials were directed to read out the messages inscribed on pillars to those who could not read.

Q.6 Why do you think slaves and servants were ill-treated? Do you think the orders of the emperor would have improved their condition? Give reasons for your answer.

Solution: Slaves and servants were ill-treated owing to the following reasons:

1. Most of them were prisoners of war.

2. Some belonged to the lowest social order, specifically Shudras.

3. The concept of human rights was virtually non-existent during that period.

Their condition would have improved after the order of Emperor because:

1. No one would dare defy the supreme order of the emperor himself.

2. Those who would disobey the emperor would be severely punished by his officials.

4. The Emperor was the supreme commander of the Mauryan Empire. Thus his word was law and had to be obeyed to the fullest extent.

Q.7 Write a short paragraph explaining Roshan why the lions are shown on our currency notes. List at least one other object on which you see them.

Solution: The Ashoka pillar in Sarnath has 4 lions on top. Lord Buddha gave his first sermon after attaining enlightenment in Sarnath. The four lions are related to Buddhism and signify peace and friendship. During our independence struggle, the Buddhist ideals of non-violence inspired the freedom movement. These lions on our symbol signify truth, peace, friendliness.

The lion symbol is an emblem of the Supreme Court of India, CBI, Police and almost all government departments. It is also seen on our passports as well.

Q.8 Suppose you had the power to inscribe your orders, what four commands would you like to issue?

Solution: Students should do this project on their own

Ashoka, The Emperor Who Gave Up War Summary

The NCERT Class 6 Our Pasts – I Chapter 7 talks about the following topics: