When someone violates the law, we immediately think of informing the police.  Owing to the role played by the police in arresting culprits, we often get confused and think that it is the police who decide whether a person is guilty or not. However, this is not true. After a person is arrested, it is a court of law that decides whether the accused person is guilty or not. According to the Constitution, every individual charged of a crime has to be given a fair trial.  What does it mean to get a fair trial? Have you heard of an FIR? Or do you know who a public prosecutor is?  Refer to Chapter 6 of CBSE Class 8 Political Science to understand these concepts. NCERT Solutions for Class 8 Civics Chapter 6 Understanding Our Criminal Justice System contains solutions to the exercises given in the Civics book – Social and Political Life. NCERT Solutions to the exercises provided by BYJU’s will be useful for school exams and will align school students’ preparation, as per the questions asked in the examinations. 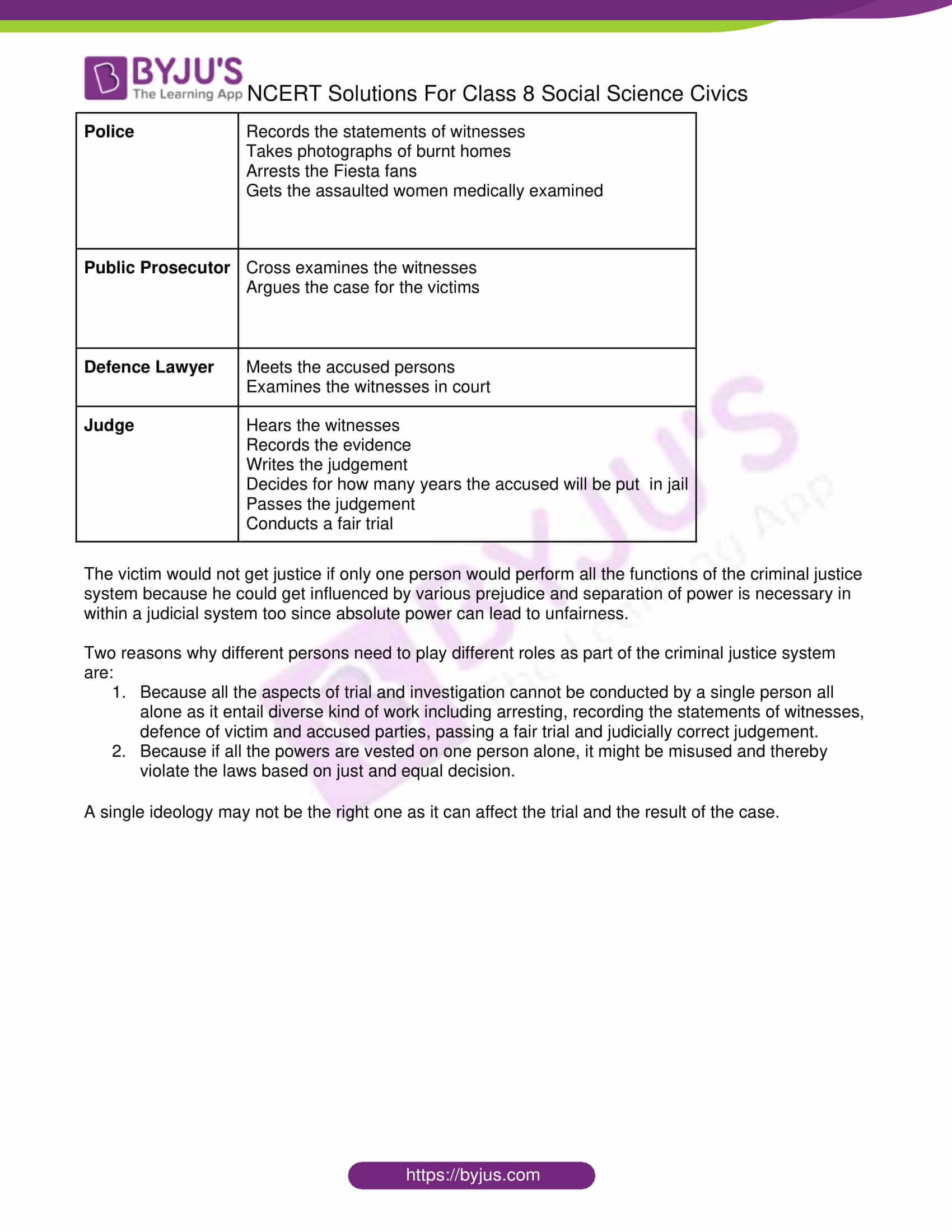 Imagine that you and your classmates are now part of the criminal justice system. First divide the class into the following four groups of persons:

The column on the right provides a list of functions. Match these with the roles that are listed on the left. Have each group pick the functions that it needs to perform to bring justice to those who were affected by the violence of the Fiesta fans. In what order, will these functions be performed?

Now take the same situation but ask one student who is a supporter of the Fiesta Club to perform all the functions listed above. Do you think the victims would get justice if only one person performed all of the functions of the criminal justice system? Why not?

State two reasons why you believe that different persons need to play different roles as part of the criminal justice system.

The victim would not get justice if only one person performs all the functions of the criminal justice system, because he could get influenced by various prejudices. A separation of power is necessary in within a judicial system too, since absolute power can lead to unfairness.

Two reasons why different people need to play different roles as part of the criminal justice system are:

A single ideology may not be the right one, as it can affect the trial and the result of the case.

According to the Constitution, every individual charged with a crime has to be given a fair trial. This chapter gives a fictional case of theft to highlight the process and role of different individuals in the criminal justice system.

You will learn about the following: