NCERT Solutions for Class 8 Civics Chapter 2 – Understanding Secularism explains the answers of the exercise questions provided at the end of this chapter. These answers created by subject experts are as per the syllabus. Studying from these answers will give more clarity about the topic and further help students to express answers in an effective way. Moreover, if students want, they can rewrite these answers in their own way.

Students can also check the NCERT Solutions for class 8 for other subjects and prepare for their examinations. 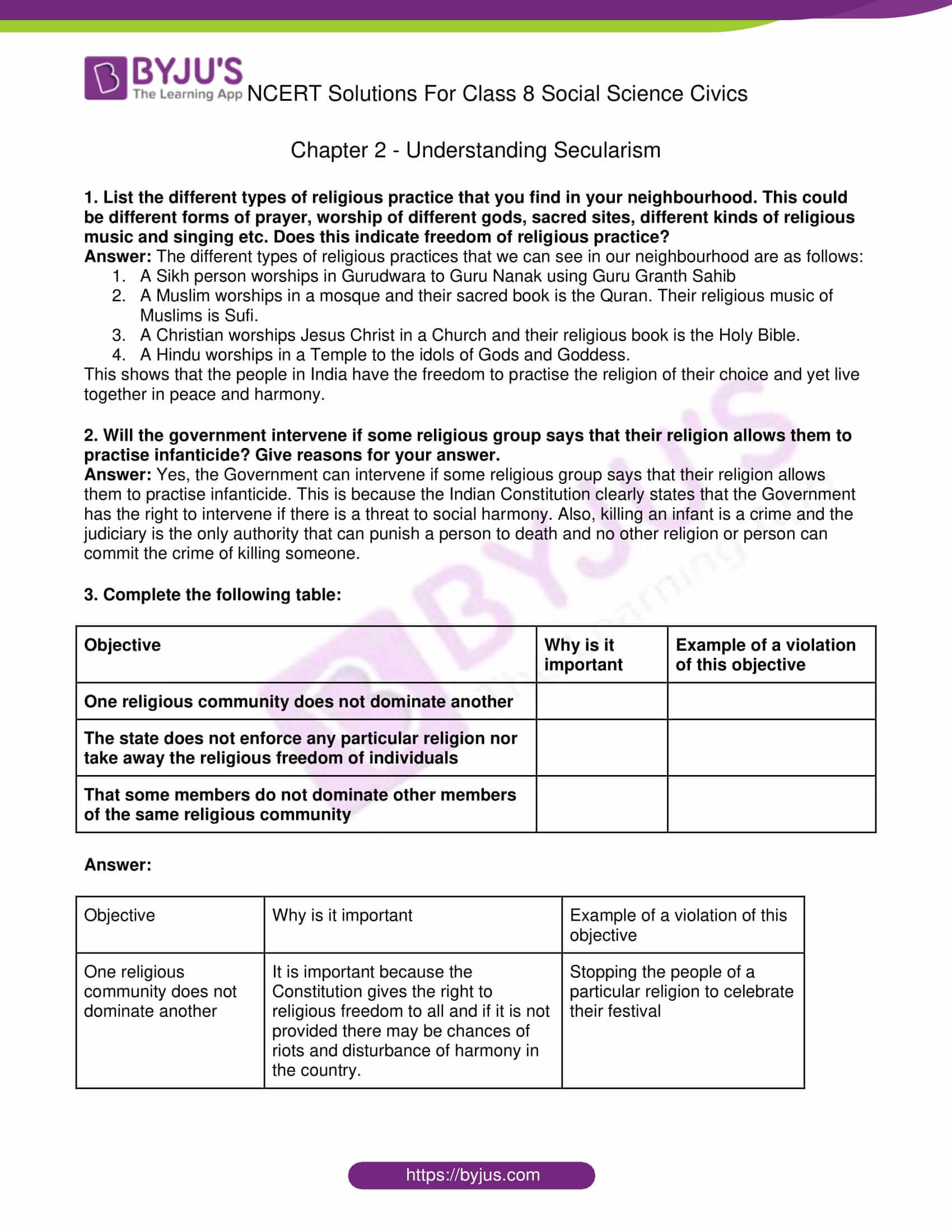 Answer: The different types of religious practices that we can see in our neighbourhood are as follows:

This shows that the people in India have the freedom to practise the religion of their choice and yet live together in peace and harmony.

2. Will the government intervene if some religious group says that their religion allows them to practise infanticide? Give reasons for your answer.

Answer: Yes, the Government can intervene if some religious group says that their religion allows them to practise infanticide. This is because the Indian Constitution clearly states that the Government has the right to intervene if there is a threat to social harmony. Also, killing an infant is a crime and the judiciary is the only authority that can punish a person to death and no other religion or person can commit the crime of killing someone.

4. Look up the annual calendar of holidays of your school. How many of them pertain to different religions? What does this indicate?

5. Find out some examples of different views within the same religion.

Answer: Some examples of different views within the same religion are as follows:

6. The Indian State both keeps away from religion as well as intervenes in religion. This idea can be quite confusing. Discuss this once again in class using examples from the chapter as well as those that you might have come up with.

Answer: The Indian state both keeps away from religion, as well as intervenes in religion. If a person with a majority religious group gets the state power, he may use the power to discriminate and persecute the people of other religions. The majority may even deprive the minority of practising their religion. For example, untouchability still exists in the Hindu community. If the state power is handed over to a person belonging to an upper-caste Hindu majority, he may use it as a weapon against the lower-class people of the society or that state.

This chapter of Class 8 Civics discusses in detail the fundamental right of religious freedom. A secular country is one that gives all its citizens the freedom to practise the religion of their choice and no majority can deprive them of this freedom.

The chapter also talks about why it is important to separate religion from the state and how power can be used in the wrong way to stop people from practising their own religion. Also, this chapter discusses why India is a secular country. India can be said to be a secular country because it is not dominated by the people of a single religion and also because the state or central power cannot force the people to follow a certain religion.

The chapter, ‘Understanding secularism’ makes it easier for the students to understand the concept of secularism and also why it is important to let the citizens of the country be fundamentally free to practice any religious belief.

Students can get NCERT Solutions for Class 8 Social Science and prepare themselves for the exams.