NCERT solutions for Class 8 Civics Chapter 4 Understanding Laws are created by subject experts to help students with their studies. The solutions contain answers to all 4 questions of the exercise. The answers are provided in  simple language and are to the point. Students can write the same answers in the exam, as well. With the use of these solutions, students can score good marks in the Social Science exam.

Students can also check the NCERT Solutions Class 8 for other subjects and can make their exam preparation simpler. 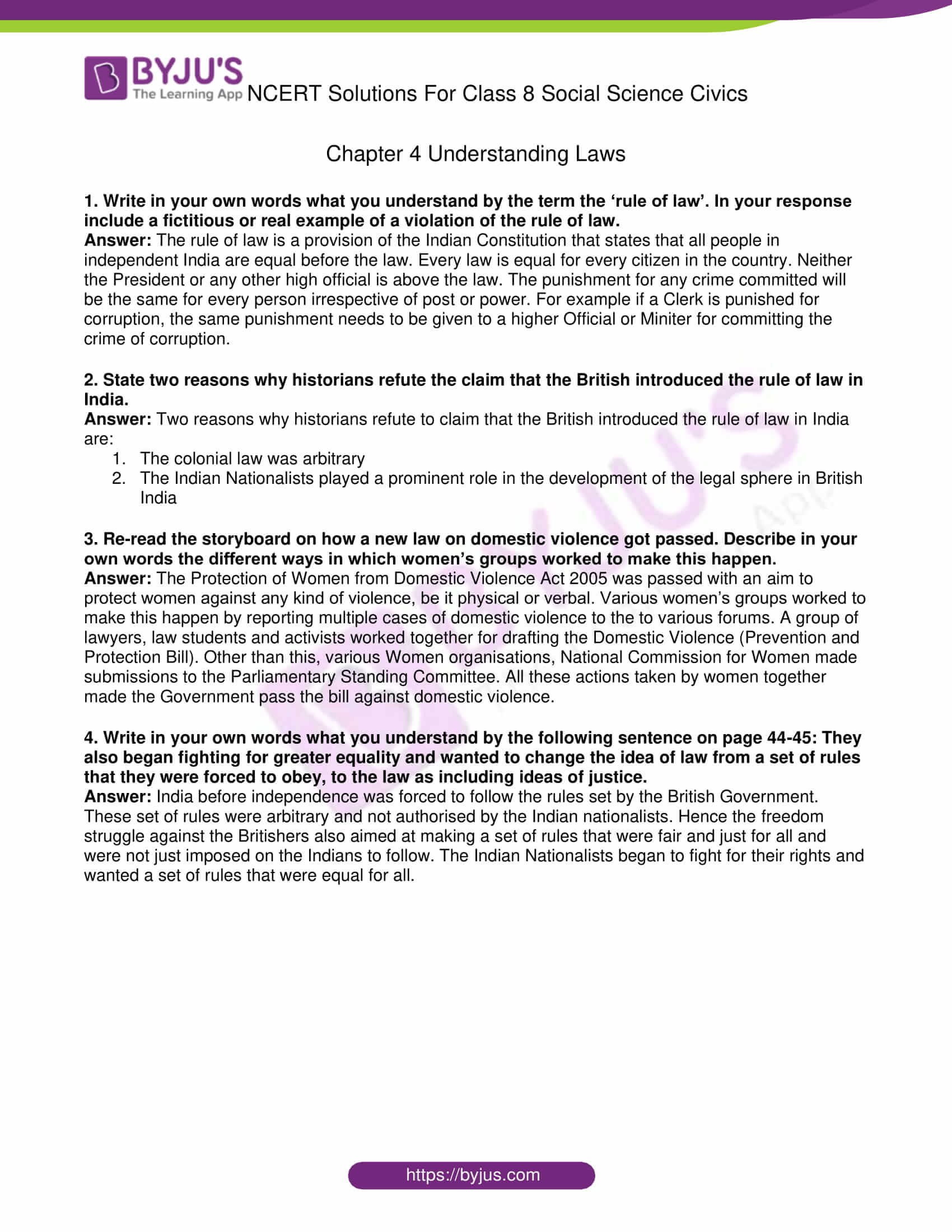 1. Write in your own words what you understand by the term the ‘rule of law’. In your response include a fictitious or real example of a violation of the rule of law.

Answer: The rule of law is a provision of the Indian Constitution that states that all people in independent India are equal before the law. Every law is equal for every citizen in the country. Neither the President or any other high official is above the law. The punishment for any crime committed will be the same for every person, irrespective of post or power. For example if a Clerk is punished for corruption, the same punishment needs to be given to a higher Official or Minister for committing the same crime of corruption.

2. State two reasons why historians refute the claim that the British introduced the rule of law in India.

Answer: Two reasons why historians refute to claim that the British introduced the rule of law in India are:

3. Re-read the storyboard on how a new law on domestic violence got passed. Describe in your own words the different ways in which women’s groups worked to make this happen.

Answer: The Protection of Women from Domestic Violence Act 2005 was passed with an aim to protect women against any kind of violence, be it physical or verbal. Various women’s groups worked to make this happen by reporting multiple cases of domestic violence to the to various forums. A group of lawyers, law students and activists worked together for drafting the Domestic Violence (Prevention and Protection Bill). Other than this, various Women organisations, National Commission for Women made submissions to the Parliamentary Standing Committee. All these actions taken by women, together made the Government pass the bill against domestic violence.

4. Write in your own words what you understand by the following sentence on page 44-45: They also began fighting for greater equality and wanted to change the idea of law from a set of rules that they were forced to obey, to the law as including ideas of justice.

Answer: India before independence was forced to follow the rules set by the British Government. These set of rules were arbitrary and not were not authorised by the Indian nationalists. Hence the freedom struggle against the Britishers also aimed at making a set of rules that were fair and just for all and were not just imposed on the Indians to follow. The Indian Nationalists began to fight for their rights and wanted a set of rules that were equal for all.

Chapter 4 – Understanding Laws of the NCERT Civics books Social and Political Life discusses the importance of laws and how the Indian Constitution provides a set of rules and laws that are common for everyone to be followed.  The difference between British laws and post-independence Indian laws is also talked about in this chapter.

Students can get NCERT Solutions for Class 8 Social Science and prepare themselves for the exams.