How would anyone feel if they were denied their rights? There are several instances in India where Lower Caste, Minorities, Women and other marginal groups argue to be conferred with equal rights, as other citizens in this democratic country. Few of these marginal groups also look up to the Indian Constitution to redress their grievances. From Chapter 8 of CBSE Class 8 Civics, learn about some of the ways in which groups and individuals challenge these existing inequalities. NCERT Solutions for Class 8 Civics Chapter 8 – Confronting Marginalisation explains the solutions to the exercises given in the Civics book – Social and Political Life. NCERT Solutions to these exercises provided by BYJU’s are easy to understand, useful for school exams preparation and are accurate. 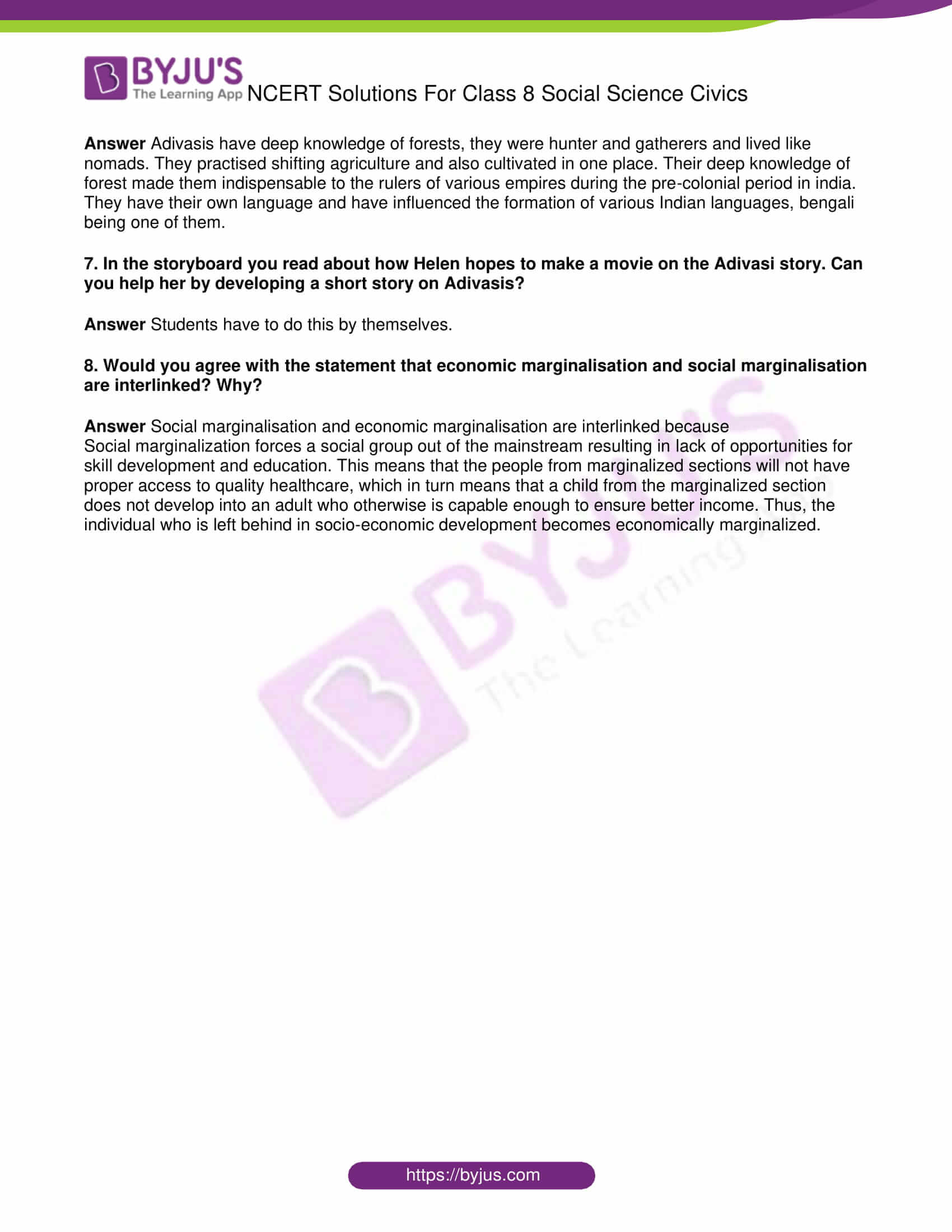 Answer The two fundamental rights that Dalits can draw upon to insist that they be treated with dignity and as equals are:

2. Re-read the story on Rathnam as well as the provisions of the 1989 Scheduled Castes and Scheduled Tribes (Prevention of Atrocities) Act. Now list one reason why you think he used this law to file a complaint.

Answer The Scheduled Castes and the Scheduled Tribes Prevention of Atrocities Act, 1989 seeks to punish those who humiliate or ill-treat the member of dalit or tribal groups. Rathnam sought the support of law, filing his complaint under the above Act to seek protection against the domination and violence of the powerful castes in his village.

3. Why do Adivasi activists, including C.K. Janu, believe that Adivasis can also use this 1989 Act to fight against dispossession? Is there anything specific in the provisions of the Act that allows her to believe this?

In this chapter, we will read about some of the ways in which groups and individuals challenge existing inequalities. Adivasis, Dalits, Muslims, women and other marginal groups argue that simply by being citizens of a democratic country, they possess equal rights that must be respected. Many among them look up to the Constitution to address their concerns. We will learn how rights are translated into laws to protect groups from continued exploitation. We will also look at the government’s efforts to formulate policies to promote the access to development for these groups.

The chapter will talk in detail about the following: