The RRB JE Exam Date 2021 is will be announced by the Railway Recruitment Board through official notice. The tentative RRB Junior Engineer Exam date is given on the exam calendar released by the conducting body.

Candidates can check the detailed RRB Exam Calendar on the link provided here.

Aspirants can know about other RRB Exams, on the linked article.

The Official RRB JE 2021 notification is not yet released by the board. Hence, the table below highlights the tentative dates for RRB JE 2021 examination-

The last exam conducted by the Railway for RRB JE was 2019 recruitment. The RRB JE Exam Dates for the year 2019 in accordance with the notification are as follows-

The application process for the exam began on January 2nd 2019. The initial stages of RRB JE Exam were set to tentatively begin between April and May 2019. The details of the RRB JE Exam Dates are given in the table below:

RRB JE CBT II result 2019 has been released by RRB on 1st November 2019. Candidates who appeared for the exam can check Zone-wise RRB JE Result 2080-19 in the given link.

Further information regarding the update is given below: 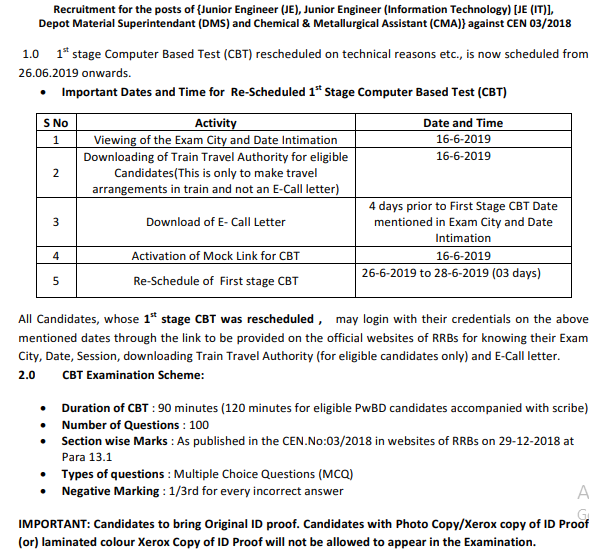 The RRB JE Exam consists of two stages of Computer-Based tests (CBT) followed by Document Verification and Medical Fitness Test. Only those candidates that pass the eligibility criteria can attend all the phases of the RRB JE Exam.

The RRB JE Eligibility Criteria are as follows:

To know more in detail about the RRB JE Eligibility Criteria, visit the linked article.

To get more information regarding the RRB JE Admit Card, visit the linked article.

Candidates can take the assistance of the well-designed study that BYJU’S has to offer. It will prove to be a crucial asset in the preparation phase for the RRB JE Exam.

Candidates can check the preparation strategies of competitive exams to gear up their preparation and outshine the competition in the final face-off.

Candidates preparing for various exams conducted by the railway board can go through the following links for relevant details:

Also, aspirants of other government exams can refer the relevant links for detailed information on the same.

Q.1. Can the candidates in their final year exam appear for RRB JE examination?

Ans. Candidates, in order to appear for RRB JE exam, must possess necessary qualification before filling the RRB JE application form. Any candidate who is waiting for the final year result of the prescribed educational requirement does not fulfil the eligibility condition and cannot apply in the RRB JE Exam.

Ans. The RRB JE Cut Off marks is decided on the basis of three factors i.e. total vacancy, total applicants and difficulty level of the exam. Candidates have to score the minimum cut off marks as decided by the Railway board.

Q.3. Is there any interview round in RRB Je exam?

Q.4. RRB JE Recruitment is done for which posts?

Q.5. What was the number of RRB JE vacancies for 2019 examination?

Q.6. How many stages does a candidate undergo in order to clear RRB JE exam?