CJI further said India has over 3,000 foreign companies with operations in India. In 2015-16, there has been a 29 percent increase in foreign direct investments. India wishes to overtake China and the United States by 2050. Yet we are ranked 130 among a total 189 countries in the Ease of Doing Business. He said investors feel that Indian courts would delay justice due to them. The need for strengthening our judicial system is deeply connected to our ambition for economic growth.

Indicating that the rush of litigation to the courts reflected the immense public faith in the judiciary, the Prime Minister said it was time for initiatives like arbitration to be aggressively pushed to match the changing scenario in business and investments.

Note: NIRF – It is a comprehensive ranking system for universities developed by the HRD Ministry. The first NIRF rankings were released in 2016. The next round of NIRF rankings will be published on the first Monday of April 2017.

2016 NIRF rankings – IIT Madras topped among engineering colleges, followed by IITs at Mumbai, Kharagpur, Delhi, Kanpur and Roorkee. IIT Madras had a score of 89.41. Among universities, the Indian Institute of Science, Bengaluru, topped, followed by the Institute of Chemical Technology in Mumbai, Jawaharlal Nehru University in Delhi, Hyderabad University and Tezpur University. Among management schools, IIM Bengaluru was ranked first with a score of 93.04, followed by the IIMs at Ahmedabad, Kolkata, Lucknow, Udaipur and Kozhikode.

4 French companies which have a major stake in the Rafale deal – Dassault Aviation, Thales, Safran and MBDA will execute offsets worth about Rs. 30,000 crore as per their share. The Dassault-Reliance JV will only execute a part of the offsets because some of the investments have to be done in DRDO for technology development.

New Zealand is among the countries led by China that have demanded a set criteria for non-signatories of the nuclear Non-Proliferation Treaty (NPT), holding up India’s membership, and the issue will be discussed by India and New Zealand. 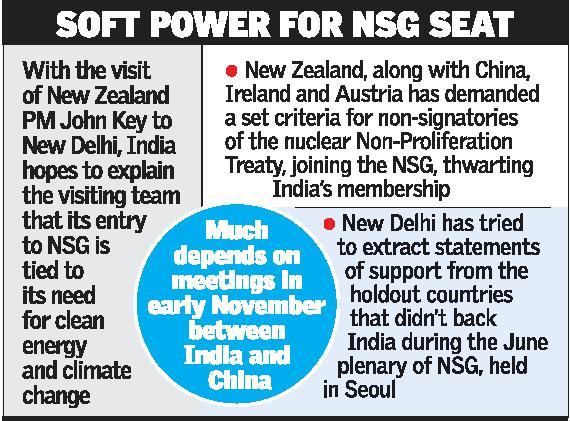 Note – After meeting Brazilian President Michel Temer, the India-Brazil joint statement said, “The Indian side conveyed its aspirations for membership of the Nuclear Suppliers Group (NSG). The Brazilian side indicated that it would work with India and other participating governments of the NSG in that direction.”

Earlier, during a visit to Pretoria in July, 2016 PM of India Narendra Modi had thanked South Africa for its support at the NSG, but South Africa made no statement on the subject, and there was no reference to the NSG during the Prime Minister’s meeting with President Zuma in the official readout at the BRICS summit.

NPT conditions: One of the reasons for the silence is that both Brazil and South Africa fought hard and domestically controversial battles to join the NSG, and could only do so after they agreed to sign the Non-Proliferation Treaty. Therefore, they have resisted full-fledged membership for India without it signing the NPT, or a formal procedure being set. Significantly, in 2008, both Brazil and South Africa had backed India’s bid for an NSG waiver, as part of the IBSA grouping.

On the agenda are discussions on likely partnerships in the power sector using Liquefied Natural Gas (LNG), developing the Trincomalee Oil Farm and expansion of the airports in Palally in Jaffna Peninsula and Colombo, among other projects. Following Sri Lanka’s decision in September, 2016 to scrap an NTPC-aided power project in the strategically-important Trincomalee, India has offered to partner the country in LNG and solar power initiatives. 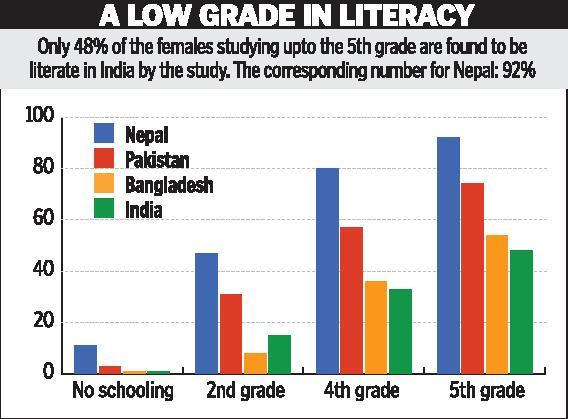 For this research, the authors devised a way to measure the quality of education around the world, with a specific focus on girls, using data from nationally representative Demographic and Health Surveys (DHS) – one of the most comparable data sources on living standards in the developing world.

India ranks low in global indices of female literacy as well.If countries are ranked by the earliest grade at which at least half of the women are literate – a proxy for quality of learning India ranks 38th among the 51 developing countries for which comparable data is available. Indonesia, Rwanda, Ethiopia and Tanzania all rank higher than India. Ghana is placed at the bottom. According to this study, just seven per cent of female students in Ghana can read after attaining their sixth grade.

Transmission of monetary policy will continue to remain sub-optimal till the estimated Rs.13.3 trillion (or Rs.13.3 lakh crore) of stressed assets/NPAs of banks are resolved. While RBI has done a good job in pushing banks to recognise their NPAs, it has been quiet on the lack of progress in the resolution of stressed assets/NPAs. While the government expects a good number of NPAs to become regular over the next few years, thereby making possible reversal of provisions made against them, there is little evidence of any progress on the ground in this regard.

Various schemes for debt resolution such as Corporate Debt Restructuring (CDR), Strategic Debt Restructuring (SDR) and the recent Scheme for Sustainable Structuring of Stressed Assets (S4A) have not had any noticeable impact so far. Illustratively, between 2009-10 and 2014-15, the total number of cases referred to CDR was 253 with an aggregate exposure of Rs.2.76 trillion (Rs 2.76 lakh crore), out of which only 5 cases involving Rs.16 billion (Rs.1,600 crore) have so far exited CDR successfully. SDR has been a non-starter and S4A has yet to take off.

The fundamental flaw in current debt resolution schemes is the lack of an enabling mechanism for infusion of fresh equity in the debtor companies. In most cases, fresh equity is unlikely without a repricing of the companies’ assets and liabilities that would lead to proper price discovery of its equity. This will entail an appropriate reduction in the companies’ debt owed to banks. Debt resolution by banks cannot happen if RBI relies only on its directives that are issued in a ‘command and control’ fashion. RBI and government must empower boards of PSU banks to take decisions on one-time settlements and debt write-off on commercial considerations alone, based on well-defined policies and the procedure to be formulated for this purpose.

All these trends are relevant to India, where 31 per cent of the population and 26 per cent of the workforce was urban according to Census 2011, with more people moving to cities and towns each year.

Today, these conflicts are reflected in the lack of adequate parks and public spaces, suitable land for informal workers who offer services in a city, egalitarian and non-polluting mobility options and new approaches to low-cost housing.

The sale is part of a series of measures the country is taking to extricate itself from a sticky situation a deeply entrenched structural dependence on oil in a world of persistently low oil prices, which went from over $110 a barrel in 2012 to below $30 at the start of 2016. This has, not surprisingly, had consequences for the kingdom, most of whose revenues come from oil. It posted a record $98-billion budget deficit, or 16 per cent of GDP, in 2015, and is expected to grow at rates less than half of last year’s, according to the International Monetary Fund.

First, despite the high price of the bonds and the long-term economic and geopolitical risks associated with Saudi Arabia, the yields looked attractive in the context of low interest rates in developed economies.

Second, oil prices have increased since the beginning of the year and are in the region of $50 a barrel.

Third, the kingdom’s salesmen are reported to have made a solid pitch on the bond roadshow, addressing investors’ concerns over the undiversified economy and reiterating Saudi Arabia’s commitment to peg the riyal to the dollar. Longer-term risks remain for the kingdom, notwithstanding the markets’ response to its bonds. A movement towards cleaner fuels and the country’s involvement in wars in Syria and Yemen pose serious risks to its stability. As the era of oil starts drawing to a close, Saudi Arabia, which has so far ignored the moral case for a gentler, more gender-equitable and open society, may now be forced to be drawn closer to the rest of the world.

a) Organization for Economic Cooperation and Development (OECD)