“Don’t blame circumstances, if I can become IAS, anyone can try partaking in the civil services” – Govind Jaiswal

Although there are many stories of IAS success, Govind Jaiswal’s is not like any other.

His is a story of sheer determination and dedication. Jaiswal’s journey to being an IAS topper was a hard fraught one since his family was steeped in poverty.

Read on to know more about his UPSC preparation and struggle to clear the IAS exam. 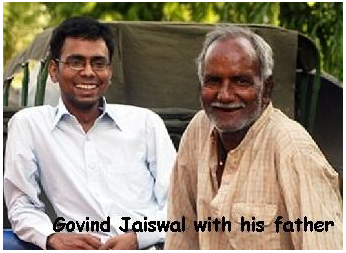 In a televised interview he gave after clearing the civil services exam in his very first attempt, Govind Jaiswal narrated the incident that changed his life course.

As an eleven-year-old, he had gone to play to a rich friend’s house. There, he was insulted for being the son of a rickshaw puller and thrown out.

Young Govind did not even fully understand the reason behind this insult, as the seeping of economic disparities into social separations generally escape children’s comprehension.

But, an older acquaintance explained to him the cruel ways of the world and told him that unless he changes his circumstances, he could expect this treatment from others throughout his life.

On inquiry as to what is the highest position of service one could aspire to, Govind was informed that the IAS is the topmost job in the country.

It was then that the young boy decided that one day he would become an IAS officer. But this was a journey fraught with difficulties.

Govind’s story shows that the civil services exam can be cracked by anyone with the will and determination to work hard.

Your background, father’s job, financial status, etc. does not matter. As far as the UPSC civil services are concerned, the only thing separating success and failure is your work.

If you work and fight off distractions and temptations, you can crack the exams and change your life forever.

Govind’s mantra whenever kids mocked his zeal towards studies was to picture his struggling family.

Read the stories of other candidates who cleared the IAS exam in the Hindi medium: