Mahajanapadas were formed sixth century BC onward. The most prominent feature of Mahajanapadas is the formation of states. With the rise of Mahajanapadas, the political history of North India became clearer. 16 Mahajanapadas had both republics and monarchies and it is important to know about these for the IAS Exam. In this article, you will get to know the following:

Aspirants preparing for GS 1 Ancient History can check similar articles from the links mentioned below:

Kingdoms that rose to fame from 6th Century BC onward were called Mahajanapdas. The Mahajanapadas signify the tribes that came together to form different groups and later gave rise to a permanent area of settlements called ‘states’ or ‘Janapadas.’

The list below provides you with the names of 16 Mahajanapadas

Candidates can refer to the 16 Mahajanapdas map to get an idea of their location. This can also help aspirants who have History subject as their optional in UPSC Mains Exam. 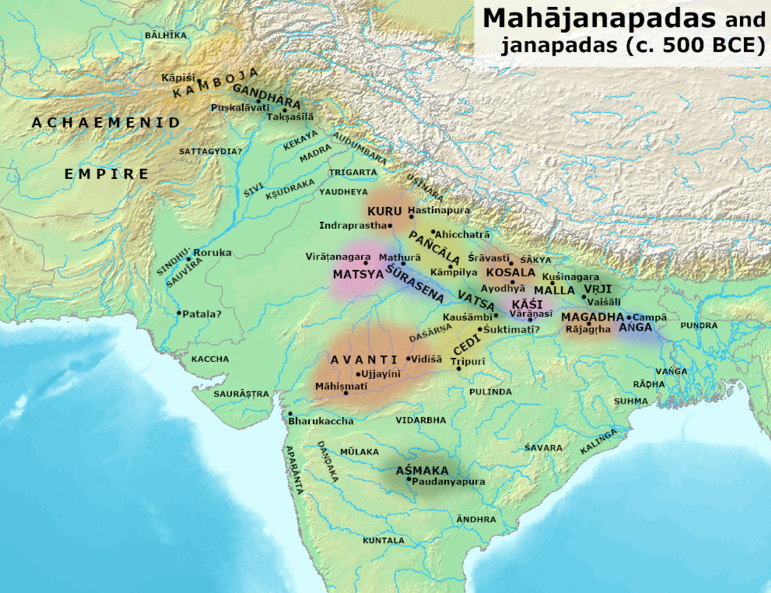 Ancient India had several kingdoms in the 6th century BC. This era saw socio-economic growth along with religious and political developments crossways the Indo-Gangetic plain.

These settlements led the growth from Janapadas to Mahajanpadas. By 6th BC, the focus of chief political activity moved from the western part of Gangetic plain to the eastern part. The eastern part of Gangetic plain consists of present-day Bihar and eastern Uttar Pradesh. The main reason for this shift was the fertile lands, better climate and topography condition bestowed with rainfall and rivers. In fact, it was the augmented use of iron tools and weapons that empowered small states to develop as a kingdom which is later known as Mahajanapadas.

The table gives you the details about 16 Mahajanapadas:

Magadha – The Most Powerful Mahajanapada

Magadha faced competition from Avanti, Kosala, and Vatsa for supremacy, however, over the years (600-400 BC), Magadha gained sovereignty and became the most powerful Mahajanapada. To read in detail about the rise and growth of the Magadha Empire, candidates shall check the linked article.

What is the difference between Janapadas and Mahajanapadas?

‘Jana’ in both terms means people. These people denoted a tribe or an ethnic group or a tribal political organization. Indo-Aryans, as mentioned in the early Vedic texts, used to live in the semi-nomadic tribal states. This tribal-state organization called ‘Jana’ transformed into Janapadas towards the end of the Vedic period. Janapadas then meant, a foothold of a tribe. And when the Janapadas started growing, they transformed into Majahanapadas.

To read the main differences between the Janapada and Mahajanapadas, you can refer to the linked article.

There are seven features or main constituents of a Mahajanapada and they are listed below:

The mentioned details are relevant for UPSC 2022 and aspirants are advised to read them carefully.