What is the Reservation Percentage in India?

The system of Reservation in India was introduced to uplift the historically disadvantaged sections of Indian society. Scheduled Castes (SC), Scheduled Tribes (ST), Other Backward Classes (OBC), Economically Backwards Classes are provided opportunities by providing them reservations in legislatures, Government Jobs, Promotions, educational scholarships.  The reservation of the percentage in higher education institutions stands at 49.5%. A similar ratio is followed in Parliament. The percentage of reservation varies in each state. Maharashtra is estimated to have the highest percentage of reservation.

Who Introduced Reservation in India?

Reservations were put in place in the Indian constitution, immediately after independence, as a means to recognise the historical injustice meted out to the people belonging to backward groups and to implement provisions by which they would have better access to resources and opportunities.

Reservations in India were introduced:

Given below is the distribution of reservation quota in India for applicants for Government jobs or Higher Educational Institutions (as of March 2021):

What was the Mandal Commission?

To know in detail about the Mandal Commission, candidates can visit the linked article.

Which are Some of the Laws Formulated for Reservation in India?

Some of the prominent laws framed for reservation policies are listed below.

UPSC aspirants must also refer to the links given below and prepare themselves for the upcoming Civil Services Exam:

Which is the latest Amendment in the Constitution to provide Reservation for Economically Weaker Sections of Society in Educational Institutions?

The Constitution (One Hundred and Third Amendment) Act, 2019 received the assent of the President of India on 12th January 2019. It provided 10% reservation for Economically Weaker Sections amongst the earlier unreserved category students. 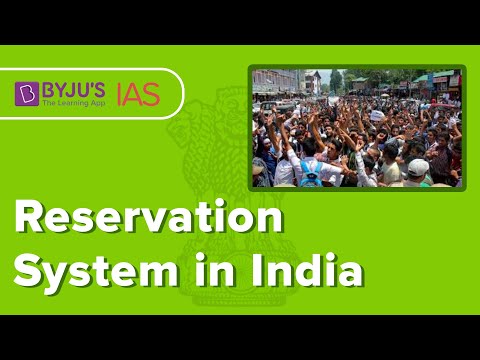 A) None of the above statements are false.

B) None of the above statements are true