Geography is an indispensable part of your UPSC Preparation. It is part of the General Studies Paper I in the UPSC Prelims and the Mains. In this article, you can learn all about solar radiation, heat balance and temperature for the IAS Exam. You can also download a PDF of these notes at the end of the page.

Solar Radiation – The earth receives almost all of its energy from the sun and it radiates the energy back to space. As a result, the earth neither warms up nor does it get cooled over a period of time. The energy received by the earth is termed as insolation- incoming solar radiation.

Variability of insolation at the surface of the earth

The amount and intensity of solar radiation received by the earth (insolation) vary during a day, in a season and in a year. The following are the factors that cause these variations:

(The insolation depends more on the first three factors)

The amount of insolation also depends on the angle of inclination of the sun’s rays. The higher the latitude the less is the angle they make with the surface of the earth which results in slant sun rays. The slant rays cover more area than the vertical rays. When more area is covered, the energy gets distributed and the net energy received per area decreases. Also, the slant rays have to pass through a greater depth of the atmosphere which results in more absorption, diffusion and scattering.

Duration of the day varies from place to place and season to season. It decides the amount of insolation received on the earth’s surface.

The amount of solar radiation received at the surface of the earth is more in the tropics (about 320 watts/m²) and least in the poles (70 watts/m²). The subtropical deserts receive maximum insolation as the atmosphere is more transparent (least cloudiness). At the same latitude, the insolation is more over the continents than over the oceans.

Terrestrial Radiation, Heating and Cooling of the Atmosphere

Heat Budget of the Earth

When 100% of solar radiation reaches the earth’s atmosphere, about 35% is reflected back to space even before reaching the surface of the earth. The reflected amount is called the albedo of the earth. This amount of energy does not heat either the earth or the atmosphere. 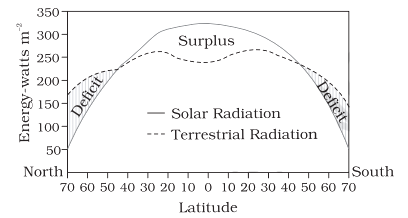 The temperature at any place is influenced by the following factors:

Get more UPSC Notes on Geography in the linked article. The conditions for inversion of temperature are

Valley Inversion – It takes place in hills and mountains due to air drainage. During winter nights, the upper surface radiates heat and gets cooled. Cold air being heavy and dense moves under the influence of gravity. It moves down the slope to pile up deeply in pockets and valley bottoms with warm air above it. This is also called the air drainage type of inversion.

UPSC 2022 is around the corner, use BYJU’S free Daily Video Analysis of The Hindu Newspaper to speed up your preparation of Current Affairs.