On 13 April 1919, British troops fired at a gathering of unarmed Indians at the Jallianwala Bagh in Amritsar leading to the deaths of at least a thousand people. This article will give in brief details about the events that led to this horrendous massacre.

The information from this article will be of immense use for candidates attempting the history segment of the IAS Exam.

Background of the Jallianwala Bagh 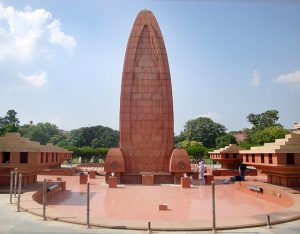 Events during the Jallianwala Bagh

What happened in Jallianwala Bagh in 1919?

In Jallianwala Bagh, which is a public garden enclosed from all sides except its narrow entrance, a group of Indians had gathered to protest peacefully against the Rowlatt Act and the arrest of their two leaders. They were unarmed and the crowd consisted of women and children too. On April 13, 1919, Brigadier General Reginald Dyer carried out one of the deadliest attacks in the history of India. Dyer’s troops closed the main entrance to the garden. Without warning, he ordered his troops to fire at the crowd of 15,000 to 20,000 people. Shooting continued for ten minutes until the ammunition was nearly exhausted.Officials figures of the massacre reveal that only 379 people died, however, the Indian National Congress had then pegged the figure at least 1,000 people killed and 500 injured.

What is the reason for Jallianwala Bagh?

The Anarchical and Revolutionary Crimes Act, 1919, popularly known as the Rowlatt Act was passed by the Imperial Legislative Council in March 1919. This was a very unpopular bill as it gave the police sweeping powers to arrest and incarcerate anyone suspected of ‘terrorist’ activities without trial for up to two years. It also empowered the police to search without a warrant and put severe restrictions on the freedom of the press.

Reginald Dyer died of a disease in 1927. The Lieutenant-Governor of Punjab Micheal O’Dwyer, aged 75, was shot dead at a joint meeting of the East India Association and the Central Asian Society (now Royal Society for Asian Affairs) in Caxton Hall in Westminster, London, on 13 March 1940, by an Indian activist, Udham Singh, in retaliation for the massacre in Amritsar.