On 4th June 1903, Mahatma Gandhi released his newspaper ‘Indian Opinion’ in South Africa to fight against racial discrimination and demand civil rights for Indians in that country. The topic, ‘Indian Opinion Newspaper’ is important for the IAS Exam from the context of the History subject asked in prelims and Mains GS-I. Read on for knowing more about this piece of Indian History. 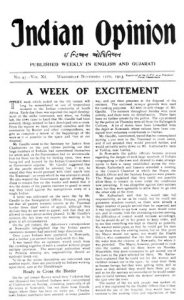 The table below mentions important facts related to the newspaper, ‘Indian Opinion’:

Mahatma Gandhi has been a pioneer in the Indian Independence Struggle. Aspirants shall read important topics related to Gandhi from the table below: