Related to Awareness in the field of IT, GS III

Prelims: About the National Strategy on Blockchain, Indigenous Servers

Context: In order to celebrate Azadi Ka Digital Mahotsav, the Ministry of Electronics and IT released the National Strategy on Blockchain along with the launch of RUDRA, India’s first indigenous server.

The Strategy Document aims at the following: 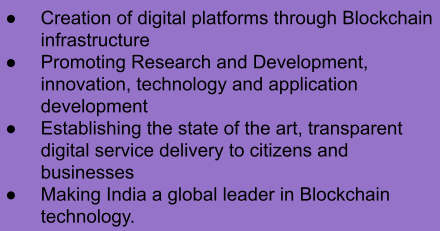 Read more about National Strategy on Blockchain Technology in the linked article.

Prelims: Important facts about the scheme

Context: To enhance the manufacturing capabilities of the Automobile industries the Government of India has initiated the PLI Scheme for the Automobile and Auto components industries which is known as the Component Champion Scheme.

Prelims: About the process of Resolution

Context: Pendency in the Indian judicial system is a major crisis and a topical context. The NITI Aayog has constituted a high-level committee to discuss the progress of Online Dispute Resolution and recently the report of the committee was released. The report considered ODR to be an effective, convenient and efficient mechanism to address and resolve disputes offering a faster delivery of justice.

Read more about Online Dispute Resolution in the linked article

Mains: Critical Analysis of the authenticity of GHI, GOI initiatives to mitigate hunger

Context: The Government of India has pointed out the faults in the parameters of the Global Hunger Index which is released by Welthungerhilfe and Concern Worldwide. It had positioned India at the 101st rank among 116 countries with a score of 27.5.

The Issue in Brief:

Read more about the Global Hunger Index in the linked article.

Read more about Dr. Rajendra Prasad in the given link:

This Day in History dated Feb 28.

6. International Day of Persons with Disability

Mains: Significance, Approach and schemes of Government to address the challenges of the disabled persons

Read more about the International Day of Persons with Disabilities in the linked article.