India’s ranking in Global Hunger Index 2021 is 101 (slipped from the 2020 index of 94) out of 116 countries. The index is jointly released by Concern Worldwide and Welthungerhilfe every October. The Hunger Index measures countries’ performance on four component indicators – undernourishment, child wasting, child stunting and child mortality. Read about the key findings of Global Hunger Index (GHI) 2021, 2020, 2019 and India’s rankings for the IAS Exam.

What is the Global Hunger Index?

The Global Hunger Index aims to track hunger at the world, regional and country levels. It is an annual report (peer-reviewed) published by Concern Worldwide of Ireland and Welthungerhilfe (a German non-profit organization).

GHI ranks countries on a 100 point scale, 0 representing zero/no hunger. The GHI scores are based on four indicators. Taken together, the component indicators reflect deficiencies in calories as well as in micronutrients. Thus, the GHI reflects both aspects of hunger (undernutrition and malnutrition). 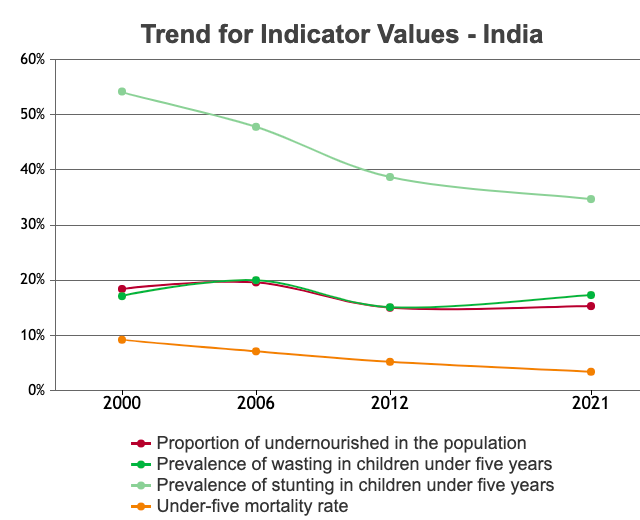 The Union Ministry of Women and Child Development issued a criticism of the latest GHI ranking (2021) in which India’s rank was lowered to 101, saying that the agencies did not do their ‘due diligence’ before releasing the report.

Read more about this development in CNA dated 18 Oct 2021 under editorial ‘Alarming hunger or statistical artefact’.

Read about the Important Government Schemes in India at the linked article.

The table below mentions India’s performance in the last three years in the Global Hunger Index.

The Global Hunger Index 2019 report mentioned a rise of 37 million in the number of hungry people as compared to 2015.

Furthermore, the hunger level in multiple countries still hasn’t reduced or has got higher than 2010 and approximately 45 counties are set to fail to achieve ‘low’ levels of hunger by 2030.

Why is India ranked Serious on the Global Hunger Index?

The Global Hunger Index 2019 report also mentioned that the Child Wasting rate in the country was extremely high at 20.8% which is higher than all other countries.

India and Other Countries on the Global Hunger Index

A) None of the above-given statements are true.

B) All the above-given statements are true.

Who releases the Global Hunger Index?

Which are the least hungry countries in the World as per the latest Global Hunger Index?

Eighteen countries, including China, Brazil and Kuwait, shared the top rank with GHI score of less than five in 2021.

Which countries are facing ‘extremely alarming’ level of hunger as per Global Hunger Index 2021?

Africa South of the Sahara and South Asia are the world regions where hunger levels are highest. Hunger in both regions is considered serious. Somalia suffers from an extremely alarming level of hunger, 5 have levels of hunger that are alarming—Central African Republic, Chad, the Democratic Republic of the Congo, Madagascar, and Yemen—and 31 countries have serious levels of hunger.