“If one woman can inspire a few other women, then they, in turn, can inspire others. It all boils down to the initiative of a single individual and rather than blaming the system, one can actually try to effect changes.” – Merin Joseph IPS

Merin Joseph, a resident of Delhi since childhood, but with roots in Kerala, had always wanted to be an IAS officer. But fate had other plans for this feisty woman.

In this article, you can read all about UPSC topper Merin Joseph IPS, the lady officer who is garnering much attention from the public for her courage and dedication. 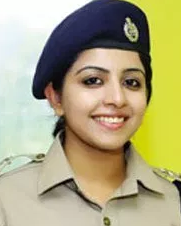 The journey towards the IAS

In the table given below, you can read all you need to know about the Indian Police Service (IPS):

Some brief facts about Officer Merin Joseph are given in the table below:

Merin recommends aspirants to start preparing for the IAS exam from the college itself. Hard work and perseverance can help aspirants clear this exam.

For more such UPSC success stories for inspiration and motivation, you can check out our segment which posts articles on IAS toppers, Get Inspired.

You can find more articles and UPSC- Related preparation materials through the links given below: