WHO WASH - Water, Sanitation and Hygiene

The WASH (Water, Sanitation and Hygiene) initiative has been taken by various countries in order to provide safe drinking water, proper sanitation facilities and a hygienic environment and livelihood to its people.

This is a World Health Organisation (WHO) initiative considering the health and hygiene of people across the world. Global facts and data collected have suggested that:

The above-mentioned information points towards the alarming condition of water and hygiene across the globe and the importance of WASH. It is estimated that if the conditions do not improve, by 2025, half of the world’s population will be living in water-stressed areas.

In this article, we shall discuss the importance of WASH and its objectives. The main emphasis will be on India’s WASH status, important organisations involved and India’s WASH strategy. IAS Exam aspirants must carefully analyse the information and facts discussed in this article.

About WHO WASH – Global Cause for Clean Water, Sanitation & Hygiene

WHO has strategised a 2018-2025 plan for the improvement in the condition of sanitation and hygiene for the people across the globe and provide them with sufficient and clean water for the purpose of a healthy life.

Given below are the key objectives of the WASH initiative:

To know more about Water Scarcity in India, visit the linked article. 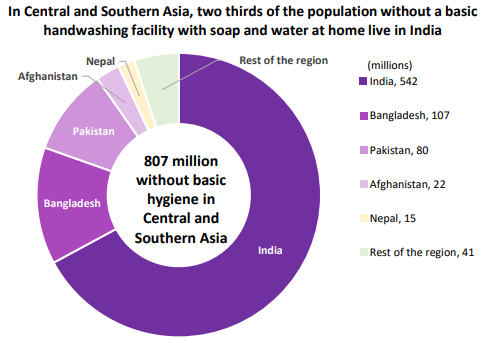 The above image shows the alarming situation of hygiene and sanitation. It shows the distribution of the population without basic hygiene facilities at home, Central and Southern Asia, 2017.

Moving forward, India should adopt the methods of water management and sanitation. If the unhygienic and unsafe water consumption is not stopped in the coming years, India may face serious damage and deaths due to water-borne diseases, especially among children.

Get updated with the latest UPSC Syllabus for the upcoming Civil Services Exam at the linked article.