NCERT Solutions for Class 10 Civics Chapter 1 – Power-sharing contains the solutions to the exercises given in the Civics book – Democratic Politics-II. In this chapter, students will mainly find questions related to the vertical division of power-sharing among different levels of government. These NCERT Solutions provide the answers to all questions in a simple and easy to understand way. Writing these answers in the exam will surely help the students in scoring high marks. 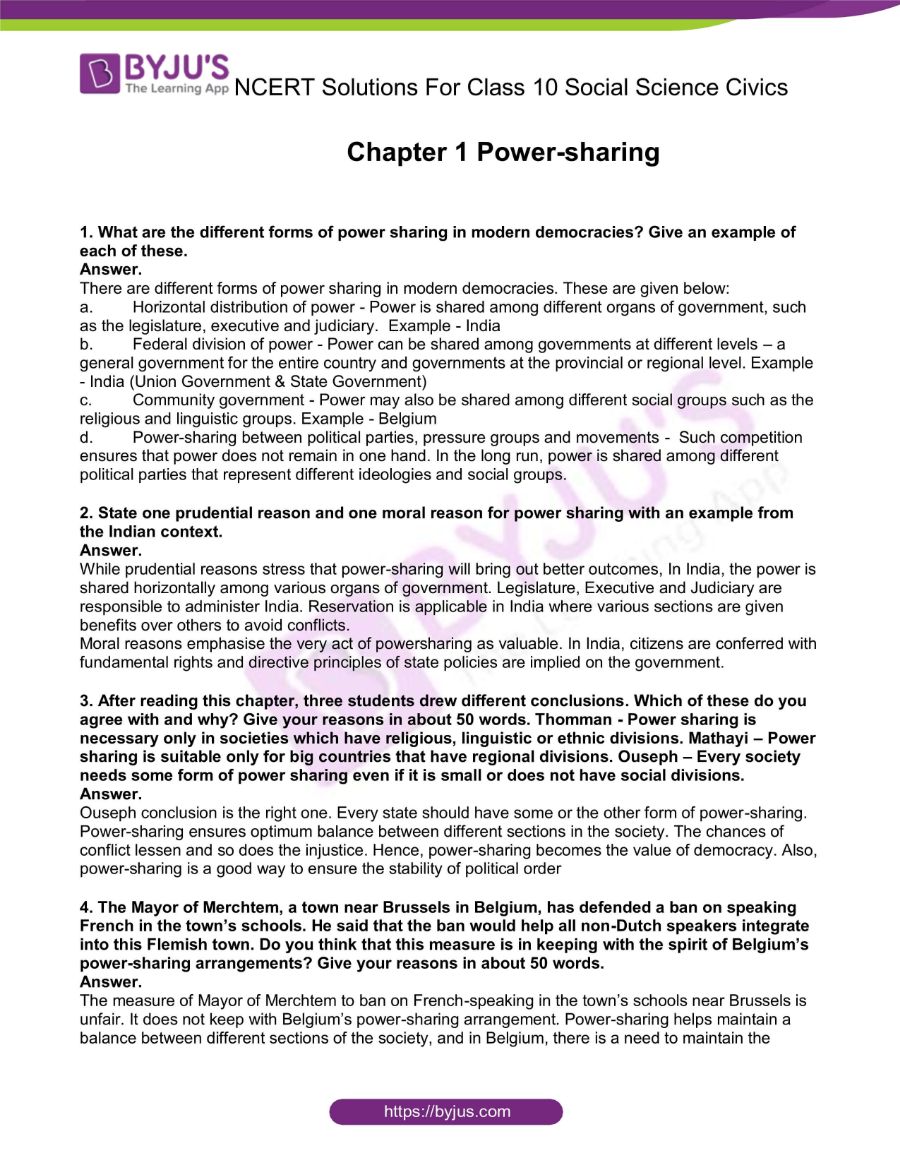 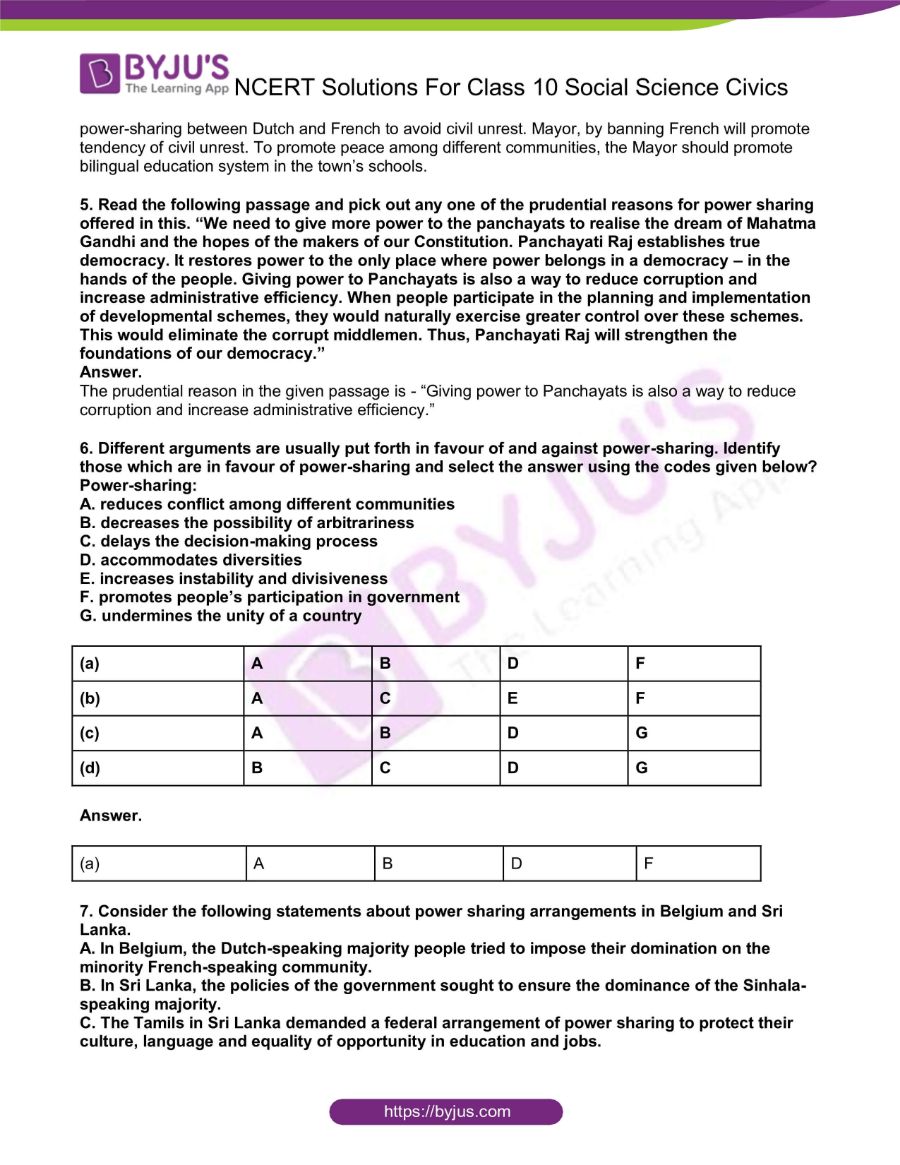 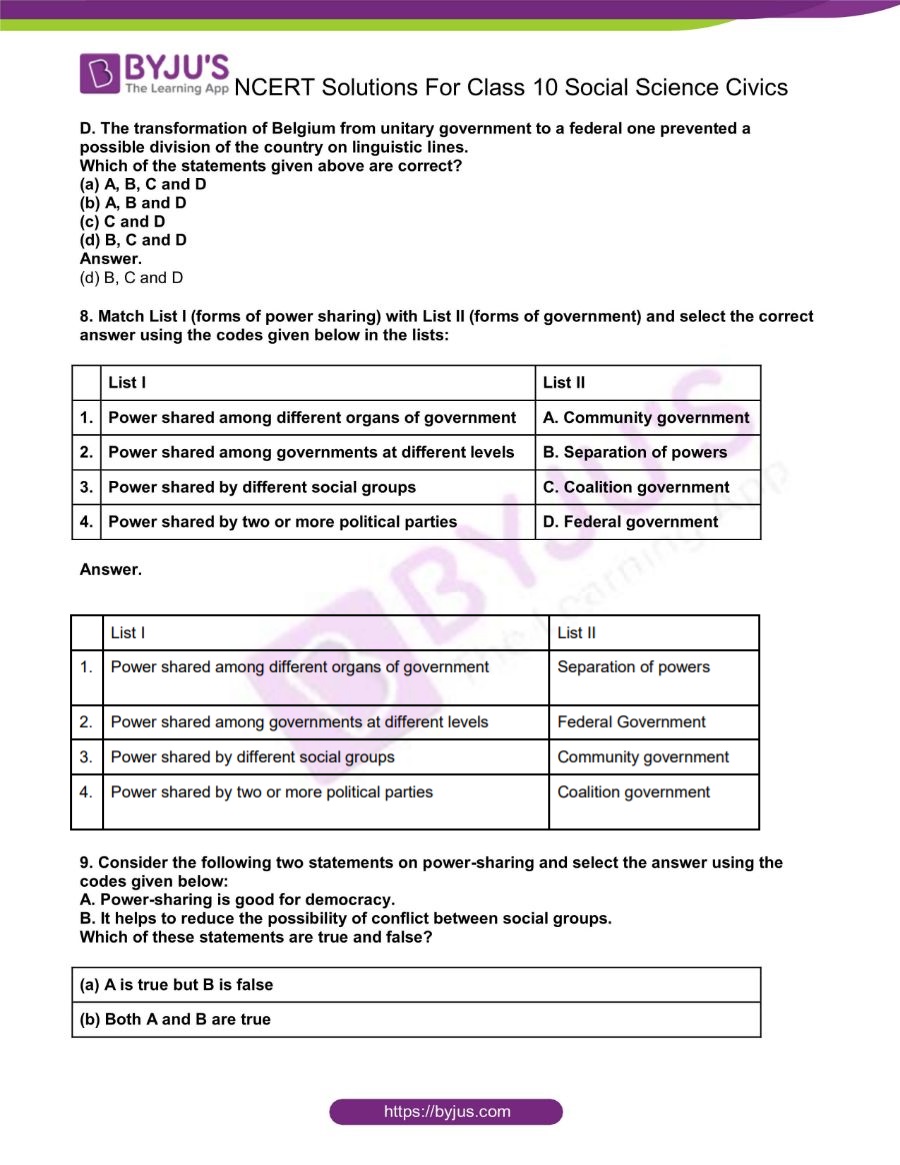 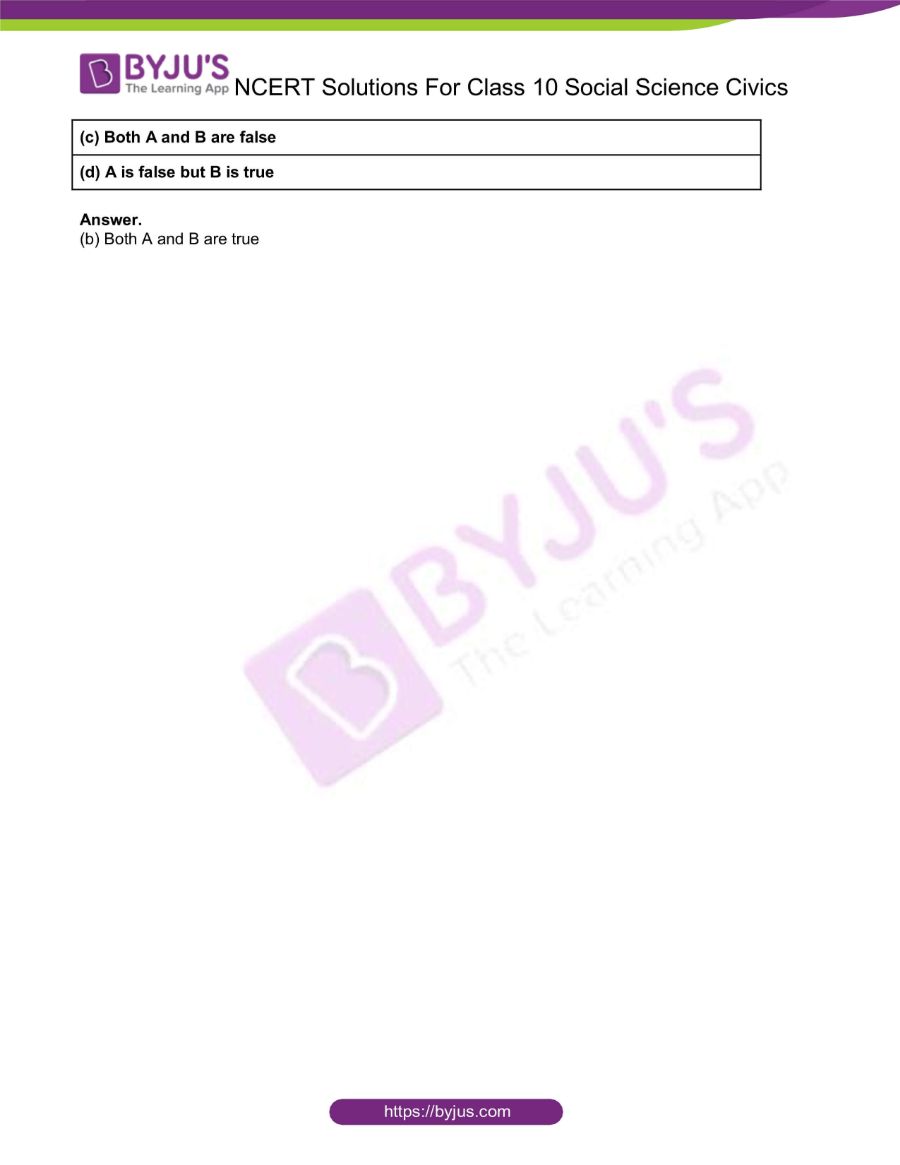 1. What are the different forms of power-sharing in modern democracies? Give an example of each of these.

There are different forms of power-sharing in modern democracies. These are given below:

2. State one prudential reason and one moral reason for power-sharing with an example from the Indian context.

While prudential reasons stress that power-sharing will bring out better outcomes. In India, the power is shared horizontally among various organs of government. The Legislature, Executive and Judiciary are responsible for administering India. Reservation is applicable in India, where various sections are given benefits over others to avoid conflicts.

Moral reasons emphasise the very act of power-sharing as valuable. In India, citizens are conferred with fundamental rights and directive principles of state policies are implied on the government.

3. After reading this chapter, three students drew different conclusions. Which of these do you agree with and why? Give your reasons in about 50 words. Thomman – Power sharing is necessary only in societies which have religious, linguistic or ethnic divisions. Mathayi – Power sharing is suitable only for big countries that have regional divisions. Ouseph – Every society needs some form of power sharing even if it is small or does not have social divisions.

Ouseph’s conclusion is the right one. Every state should have some or the other form of power-sharing. Power-sharing ensures an optimum balance between different sections in the society. The chances of conflict lessen, and so does the injustice. Hence, power-sharing becomes the value of democracy. Also, power-sharing is a good way to ensure the stability of political order

4. The Mayor of Merchtem, a town near Brussels in Belgium, has defended a ban on speaking French in the town’s schools. He said that the ban would help all non-Dutch speakers integrate into this Flemish town. Do you think that this measure is in keeping with the spirit of Belgium’s power-sharing arrangements? Give your reasons in about 50 words.

The measure of Mayor of Merchtem to ban on French-speaking in the town’s schools near Brussels is unfair. It does not keep with Belgium’s power-sharing arrangement. Power-sharing helps maintain a balance between different sections of society, and in Belgium, there is a need to maintain the power-sharing between Dutch and French to avoid civil unrest. Banning French will promote the tendency of civil unrest. To promote peace among different communities, the Mayor should promote bilingual education system in the town’s schools.

5. Read the following passage and pick out any one of the prudential reasons for power sharing offered in this. “We need to give more power to the panchayats to realise the dream of Mahatma Gandhi and the hopes of the makers of our Constitution. Panchayati Raj establishes true democracy. It restores power to the only place where power belongs in a democracy – in the hands of the people. Giving power to Panchayats is also a way to reduce corruption and increase administrative efficiency. When people participate in the planning and implementation of developmental schemes, they would naturally exercise greater control over these schemes. This would eliminate the corrupt middlemen. Thus, Panchayati Raj will strengthen the foundations of our democracy.”

The prudential reason in the given passage is – “Giving power to Panchayats is also a way to reduce corruption and increase administrative efficiency.”

G. undermines the unity of a country

7. Consider the following statements about power-sharing arrangements in Belgium and Sri Lanka.

8. Match List I (forms of power-sharing) with List-II (forms of government) and select the correct answer using the codes given below in the lists:

9. Consider the following two statements on power-sharing and select the answer using the codes given below:

A). Power-sharing is good for democracy.

B). It helps to reduce the possibility of conflict between social groups.

Which of these statements are true and false?

Chapter 1 of NCERT Social Science Civics textbook – Democratic Politics-II will introduce students to a system called power-sharing in a democracy. This system of power-sharing allows the government to share its responsibilities and powers among different levels. In India, legislature, executive and judiciary are different organs who share powers to run the government in one way or the other. Class 10 students will be introduced to different forms of power-sharing with examples of Sri Lanka, Belgium and more.

a. Why power sharing is desirable?

Does the BYJU’S NCERT Solutions for Class 10 Political Science Chapter 1 provide accurate information for the CBSE Term I exam preparation?

The solutions offered by BYJU’S are accurate enough based on the guidelines set by the CBSE board. The faculty create the modules passionately so that students can learn new topics efficiently. NCERT Solutions are detailed yet easy to comprehend making it interesting for the students to refresh the concepts after learning them. Students can access the PDF format of solutions which are available in BYJU’S with a free download option and score well in the CBSE Term I exams. The concepts are explained in an elaborate manner to help students grasp them without any difficulty.

Can the BYJU’S NCERT Solutions for Class 10 Political Science Chapter 1 help students to fetch good marks in the CBSE Term I exam?

BYJU’S is an online learning portal where chapters and exercises have been framed by the experts to help students practice well for their CBSE Term I exams. The answers are prepared and reviewed by the subject matter experts who possess vast experience in the respective subject. The solutions are created by keeping in mind the method of helping students to learn new concepts at this stage. So the main aim of providing solutions is to empower students with knowledge.

What topics are important in the Chapter 1 of NCERT Solutions for Class 10 Political Science?

The important topics in the Chapter 1 of NCERT Solutions for Class 10 Political Science are –
1. Belgium and Sri Lanka
2. Majoritarianism in Sri Lanka
3. Accommodation in Belgium
4. Forms of power-sharing
To learn these concepts effortlessly, students are recommended to download the NCERT Solutions for Class 10 Political Science and refer to them while answering the textbook questions. The solutions are given in both online and offline mode to help students to learn the subject at their own pace.