NCERT Solutions for Class 10 Civics Chapter 7 – Outcomes of Democracy will help you to prepare for the exam in an effective way. These solutions contain the answers to the exercise problem. In the CBSE exam, most of the questions are asked from the NCERT Book. So, going through the NCERT Solutions of Class 10 Political Science will give an extra edge to your exam preparation. You will learn a better way of expressing your answers. 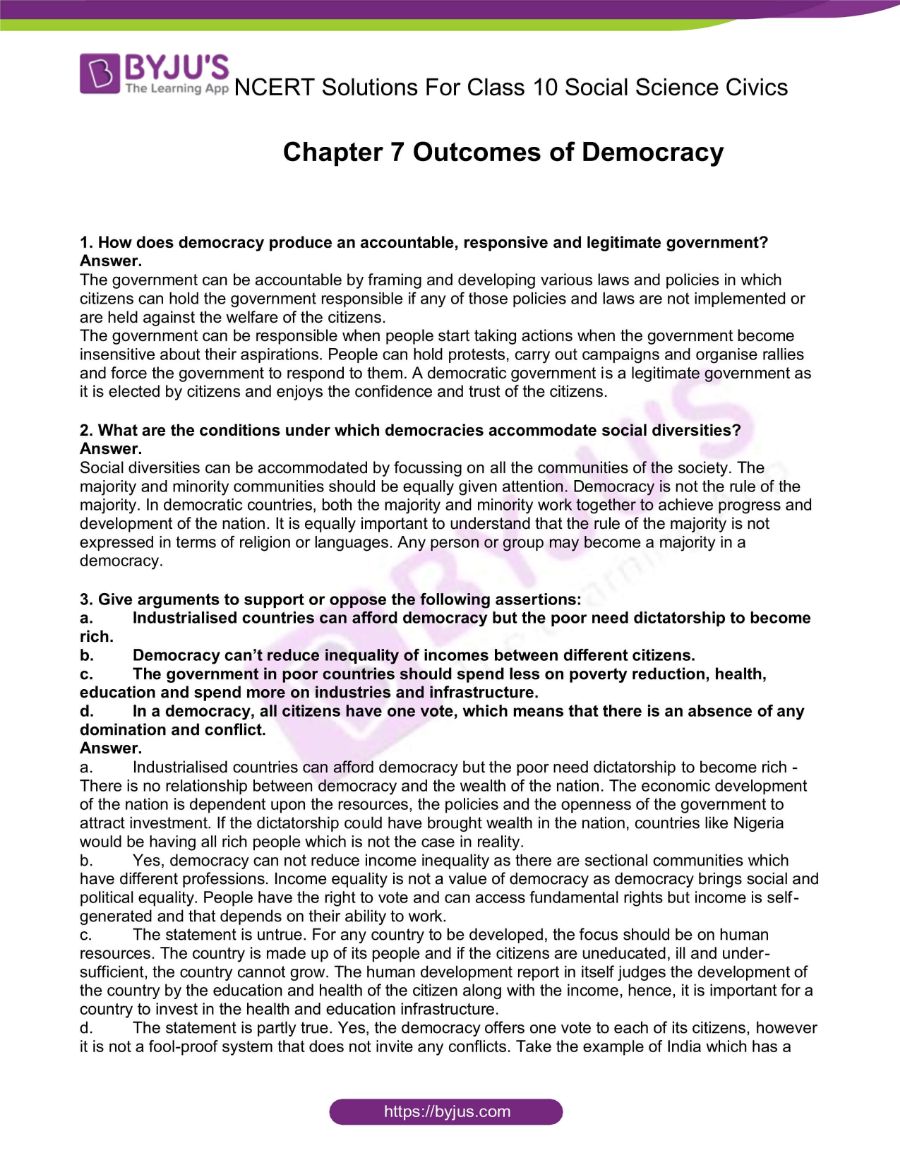 1. How does democracy produce an accountable, responsive and legitimate government?

The government can be accountable by framing and developing various laws and policies in which citizens can hold the government responsible if any of those policies and laws are not implemented or are held against the welfare of the citizens.

The government can be responsible when people start taking action when the government becomes insensitive about their aspirations. People can hold protests, carry out campaigns and organise rallies and force the government to respond to them. A democratic government is a legitimate government, as it is elected by citizens and enjoys the confidence and trust of the citizens.

2. What are the conditions under which democracies accommodate social diversities?

3. Give arguments to support or oppose the following assertions:

a) Following a High Court directive, a temple in Orissa that had separate entry doors for Dalits and non-Dalits allowed entry for all from the same door.

The biggest challenge to democracy, in this case, is if such practices continue in the country, there is a threat that discrimination based on caste, colour and creed cannot be eliminated. If people indulge in such practices, legal actions can be taken against them. The Constitution clearly states that discrimination of any kind will be considered a crime and a big threat to the peace of the country. In such cases, serious actions must be taken against the people so that the communal harmony of the country does not gets disturbed.

b) A large number of farmers are committing suicide in different states of India.

Answer: A large number of farmers are committing suicides in different states of India because of the economic inequality in the country. Farmers in villages grow crops on a small piece of land, and if the weather conditions do not stay stable, the farmer has to suffer serious loss. He is further unable to repay the loan taken from the moneylender or the bank and gets overburdened by the loan. These cases have increased in the country over the past few years, and the poor farmers take such severe steps like committing suicide. The government should provide these farmers with cheap fertilizers and seeds and provide them with better irrigation methods.

c) Following allegation of killing of three civilians in Gandwara in a fake encounter by Jammu and Kashmir police, an enquiry has been ordered.

Answer: Allegations of killing three civilians in Gandwara by the Jammu and Kashmir police in a fake encounter raises questions on the police force of the state. The challenge here is to control the power of the police and other authoritative officials.

5. In the context of democracies, which of the following ideas is correct – democracies have successfully eliminated?

D. the idea of political inequality

6. In the context of assessing democracy which among the following is odd one out? Democracies need to ensure:

7. Studies on political and social inequalities in democracy show that

B. inequalities exist in democracies.

Chapter 7 of NCERT Social Science Political Science textbook – Democratic Politics-II will throw open the question of why we need democracy. Students will be taught the outcomes of democracy and what we try to achieve in a democratic country. Students will also read about the features of democracy and the chapter will also discuss if a democratic country can work accordingly in reality. Quality of government, economic well-being, inequality, social differences, conflict and finally freedom and dignity will be discussed with respect to democracy.

What type of questions are present in the Chapter 7 of NCERT Solutions for Class 10 Political Science?

There are about 7 questions in the Chapter 7 of NCERT Solutions for Class 10 Political Science which includes long answer, short answer and MCQs. The NCERT Solutions contain answers to all the questions present in the NCERT textbook. The teachers at BYJU’S design the solutions as per the CBSE guidelines to help students memorise the concepts effectively. All the important topics are highlighted in the solutions to help students to remember the events in the actual order.

List the topics covered in the Chapter 7 of NCERT Solutions for Class 10 Political Science.

The topics covered in the Chapter 7 of NCERT Solutions for Class 10 Political Science are –
1. How do we assess democracy’s outcomes?
2. Accountable, responsive and legitimate government
3. Economic growth and development
4. Reduction of inequality and poverty
5. Accommodation of social diversity
6. Dignity and freedom of the citizens

Where can I get the NCERT Solutions for Class 10 Political Science Chapter 7?

BYJU’S is one of the online websites where the students can find the NCERT Solutions for all the chapters. The solutions for the chapters are designed by the experts with the aim of helping students to score well in the CBSE exam. Political Science basically contains a lot of dates and important events to remember. For this reason, the solutions are provided in a systematic manner which enables students to remember the events without any difficulty. Students can get the PDF of solutions from BYJU’S for free which can be downloaded and accessed without any time limits.