In Chapter 2 of Class 10 Political Science, students have learned how power can be distributed to accommodate linguistic and regional diversities. After reading the chapter, students will find questions based on it. So, to help them we are providing the NCERT Solutions for Class 10 Civics Chapter 2 – Federalism. These solutions contain the answers to all the exercise questions created by subject experts. The Solutions will also help students to understand the answer writing skills. 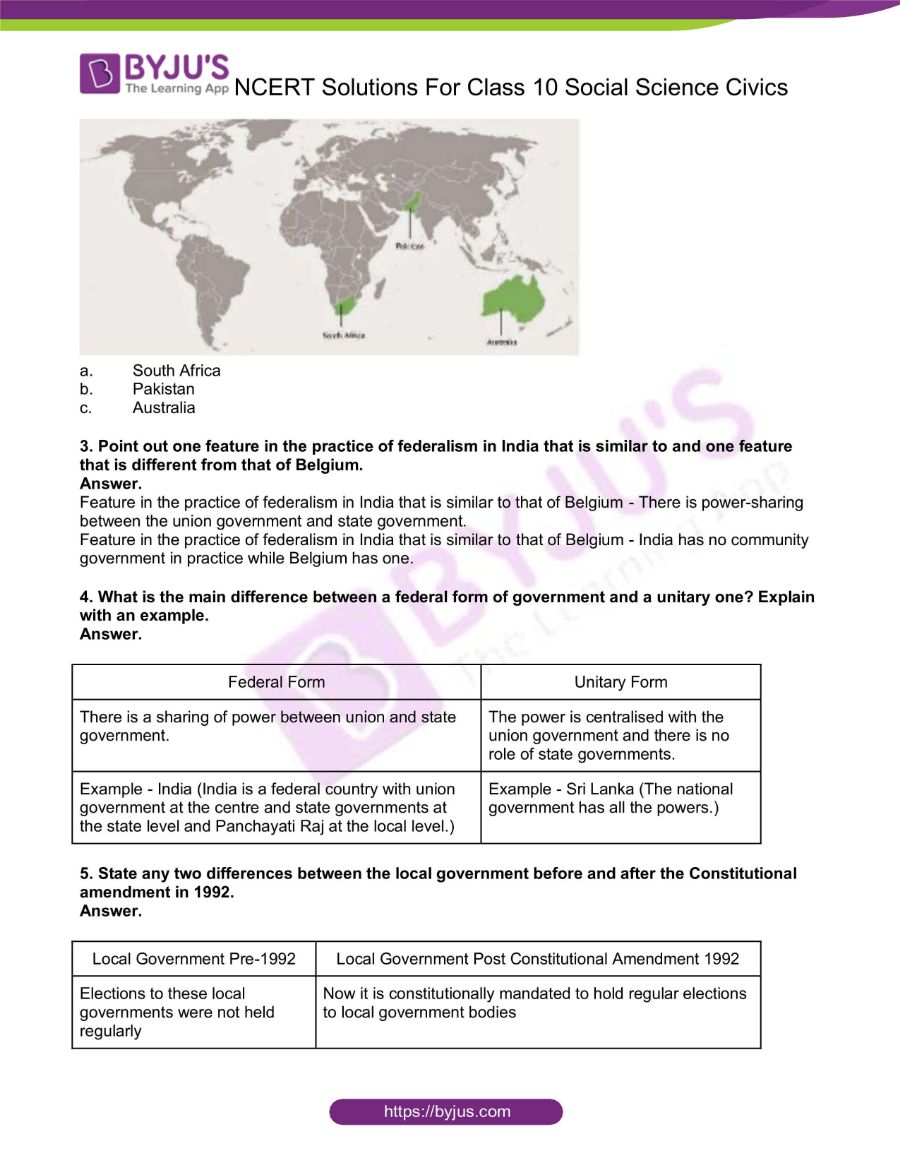 The solutions for chapter 2 of Democratic Politics-I are given below. Students should also check NCERT Solutions for Class 10 for other subjects. 2. Identify and shade three federal countries (other than India) on a blank outline political map of the world.

3. Point out one feature in the practice of federalism in India that is similar to and one feature that is different from that of Belgium.

Feature in the practice of federalism in India that is similar to that of Belgium – There is power-sharing between the union government and state government.

Feature in the practice of federalism in India that is different from that of Belgium – India has no community government in practice, while Belgium has one.

4. What is the main difference between a federal form of government and a unitary one? Explain with an example.

5. State any two differences between the local government before and after the Constitutional amendment in 1992.

7. Here are three reactions to the language policy followed in India. Give an argument and an example to support any of these positions.

Sangeeta: The policy of accommodation has strengthened national unity.

Arman: the Language-based States have divided us by making everyone conscious of their language.

Harish: This policy has only helped to consolidate the dominance of English over all other languages.

8. The distinguishing feature of a federal government is:

d. Governmental power is divided between different levels of government

9. A few subjects in various Lists of the Indian Constitution are given here. Group them under the Union, State and Concurrent Lists as provided in the table below.

11.Match List-I with List-II and select the correct answer using the codes given below the lists:

Chapter 2 of NCERT Social Science Civics textbook – Democratic Politics-II will introduce students to federalism, which is a power-sharing system between two or more levels of the government. In India, federalism exists. The power is divided with three levels – union government, state government and local government. Students will learn the basics of federalism in India with special mention to decentralisation. The local government called the ‘Panchayati Raj’ will be discussed.