*According to the latest update on the CBSE Syllabus 2022-23, this chapter has been removed.

NCERT Solutions for Class 10 Civics Chapter 3 will provide students an understanding that the existence of social diversity does not threaten democracy. The political expression of social differences is possible and sometimes quite desirable in a democratic system. To help students in their exam preparation, we have compiled the answers to the exercise questions. The NCERT Solutions for Class 10 Civics Chapter 3 Democracy and Diversity contain the answers created by experts. The answers are created, keeping in mind the exam syllabus and covers all the important points from an examination perspective. 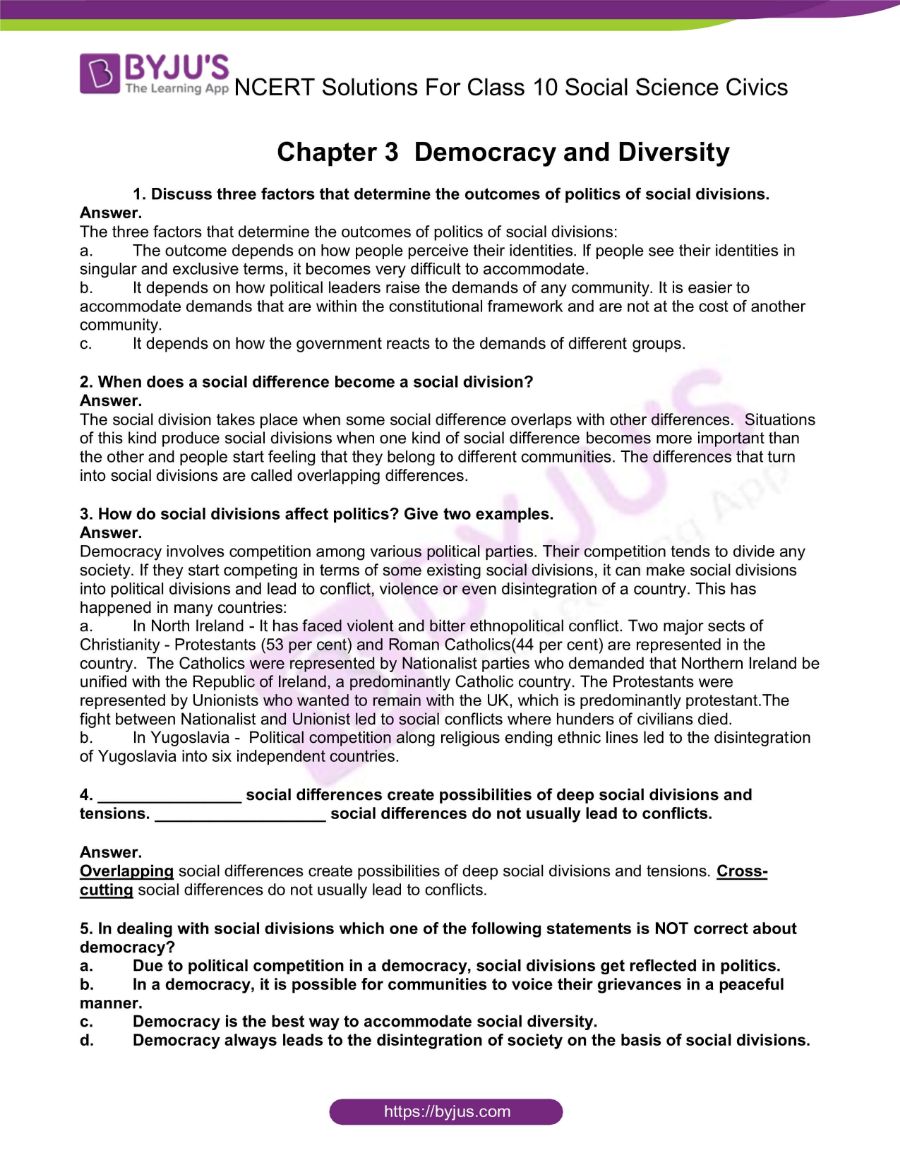 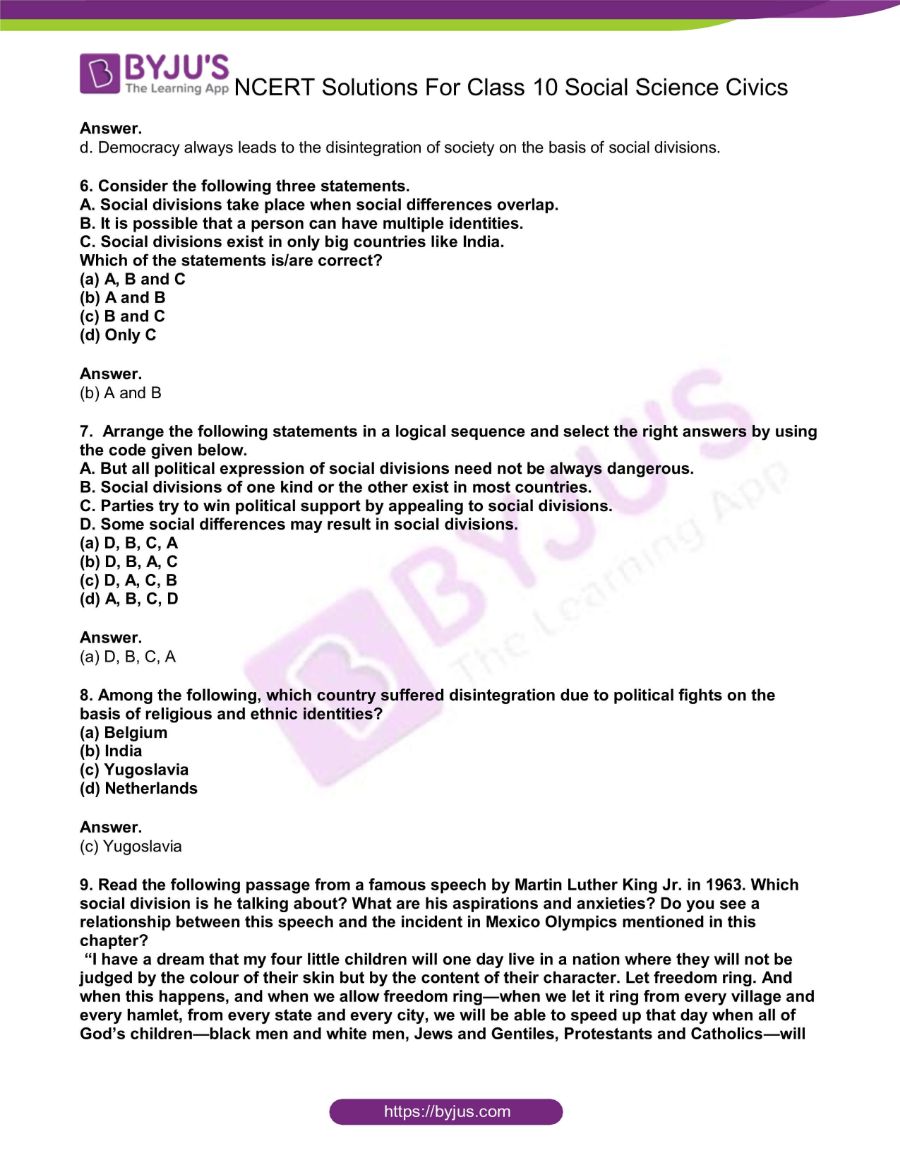 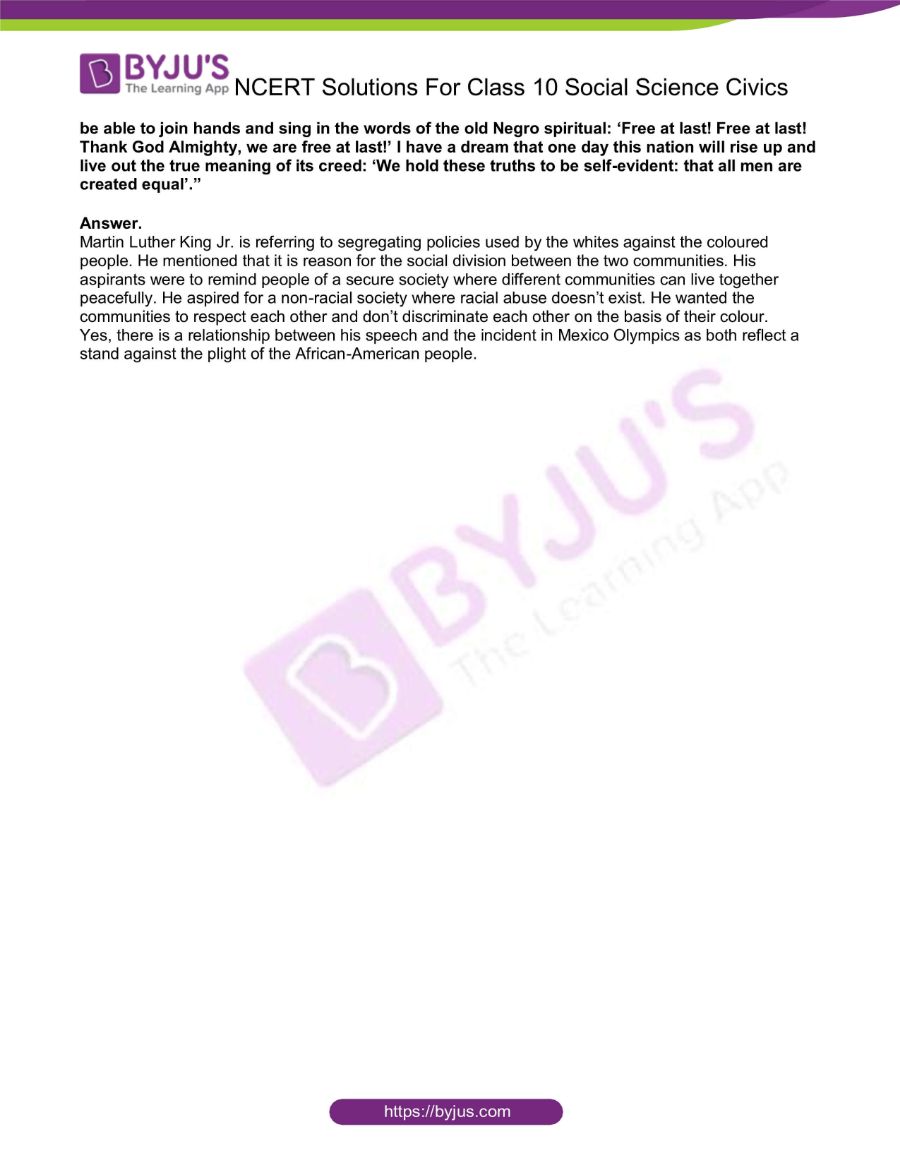 1. Discuss three factors that determine the outcomes of politics of social divisions.

The three factors that determine the outcomes of politics of social divisions:

3. How do social divisions affect politics? Give two examples.

a. In North Ireland – It has faced violent and bitter ethnopolitical conflict. Two major sects of Christianity – Protestants (53 per cent) and Roman Catholics(44 per cent) are represented in the country. The Catholics were represented by Nationalist parties who demanded that Northern Ireland be unified with the Republic of Ireland, a predominantly Catholic country. The Protestants were represented by Unionists who wanted to remain with the UK, which is predominantly protestant. The fight between Nationalist and Unionist led to social conflicts where hundreds of civilians died.

b. In Yugoslavia – Political competition along religious and ethnic lines led to the disintegration of Yugoslavia into six independent countries.

5. In dealing with social divisions which one of the following statements is NOT correct about democracy?

d. Democracy always leads to the disintegration of society on the basis of social divisions.

Which of the statements is/are correct?

7. Arrange the following statements in a logical sequence and select the right answers by using the code given below.

8.Among the following, which country suffered disintegration due to political fights on the basis of religious and ethnic identities?

9. Read the following passage from a famous speech by Martin Luther King Jr. in 1963. Which social division is he talking about? What are his aspirations and anxieties? Do you see a relationship between this speech and the incident in Mexico Olympics mentioned in this chapter?

“I have a dream that my four little children will one day live in a nation where they will not be judged by the colour of their skin but by the content of their character. Let freedom ring. And when this happens, and when we allow freedom ring—when we let it ring from every village and every hamlet, from every state and every city, we will be able to speed up that day when all of God’s children—black men and white men, Jews and Gentiles, Protestants and Catholics—will be able to join hands and sing in the words of the old Negro spiritual: ‘Free at last! Free at last! Thank God Almighty, we are free at last!’ I have a dream that one day this nation will rise up and live out the true meaning of its creed: ‘We hold these truths to be self-evident: that all men are created equal’.”

Martin Luther King Jr. is referring to segregating policies used by the whites against the coloured people. He mentioned that it is the reason for the social division between the two communities. His aspiration was for people to move towards a secure society where different communities can live together peacefully. He hoped for a non-racial society where racial abuse doesn’t exist. He wanted the communities to respect each other and not discriminate against each other on the basis of their colour.

Yes, there is a relationship between his speech and the incident at the Mexico Olympics, as both reflect a stand against the plight of the African-American people.

Chapter 3 of NCERT Social Science Civics textbook – Democratic Politics-II will introduce students to politics of racial discrimination. As the Class 10 students have already studied about the social divisions and the democracy, this chapter will help them learn how people also identify themselves not only on the basis of linguistics and ethnicity but also race, colour, physical appearance, class, caste, gender, tribe, etc. How the state public expresses social divisions on the mentioned grounds will be discussed in the chapter. The state also plays a role in either suppressing social conflicts or to promoting social conflicts.

Why should one choose for the NCERT Solutions for Class 10 Political Science Chapter 3 from BYJU’S?

We at BYJU’S provide 100% accurate answers so that the students can score well in the board exams. The solutions are framed by the faculty after conducting a vast research on each concept. Students who have doubts while answering the textbook questions can refer to these solutions to get a clear idea about the overall concepts. It mainly increases interest among students to learn new concepts without any difficulty. The simple and understandable language used in explaining the topics boost confidence among students to ace the exam without fear.

How should I prepare for the board exam using the NCERT Solutions for Class 10 Political Science Chapter 3?

You need to learn the chapter and revise them on a regular basis to get a grip on the concepts. The correct study materials like the NCERT Solutions provided at BYJU’S should be chosen to score good marks in the exam. Students should refer to the solutions while learning a new chapter to understand the method of answering questions as per the latest CBSE guidelines. The syllabus for the academic year should be understood before the exam to know the marks weightage of each concept covered in the chapter.

What will I learn from the Chapter 3 of NCERT Solutions for Class 10 Political Science?

From the Chapter 3 of NCERT Solutions for Class 10 Political Science, you will learn about topics and sub topics like –
1. A Story from Mexico Olympics
2. Differences, similarities, divisions
a. Origins of social differences
b. Overlapping and cross-cutting differences
3. Politics of social divisions
a. Range of outcomes
b. Three determinants