When historians read documents, maps and texts from the past, they have to be sensitive to the different historical backgrounds–the contexts– in which information about the past was produced. The context in which information is produced changes with time. Chapter 1 of CBSE Class 7 History helps students trace the changes through a thousand years.  NCERT Solutions for Class 7 History Chapter 1 “Tracing Changes Through A Thousand Years” contains solutions to the exercises given in the “Our Pasts-II”.  NCERT Solutions of the exercises provided at the end of the chapter will be useful for school exams, as they are sourced from the NCERT textbooks. 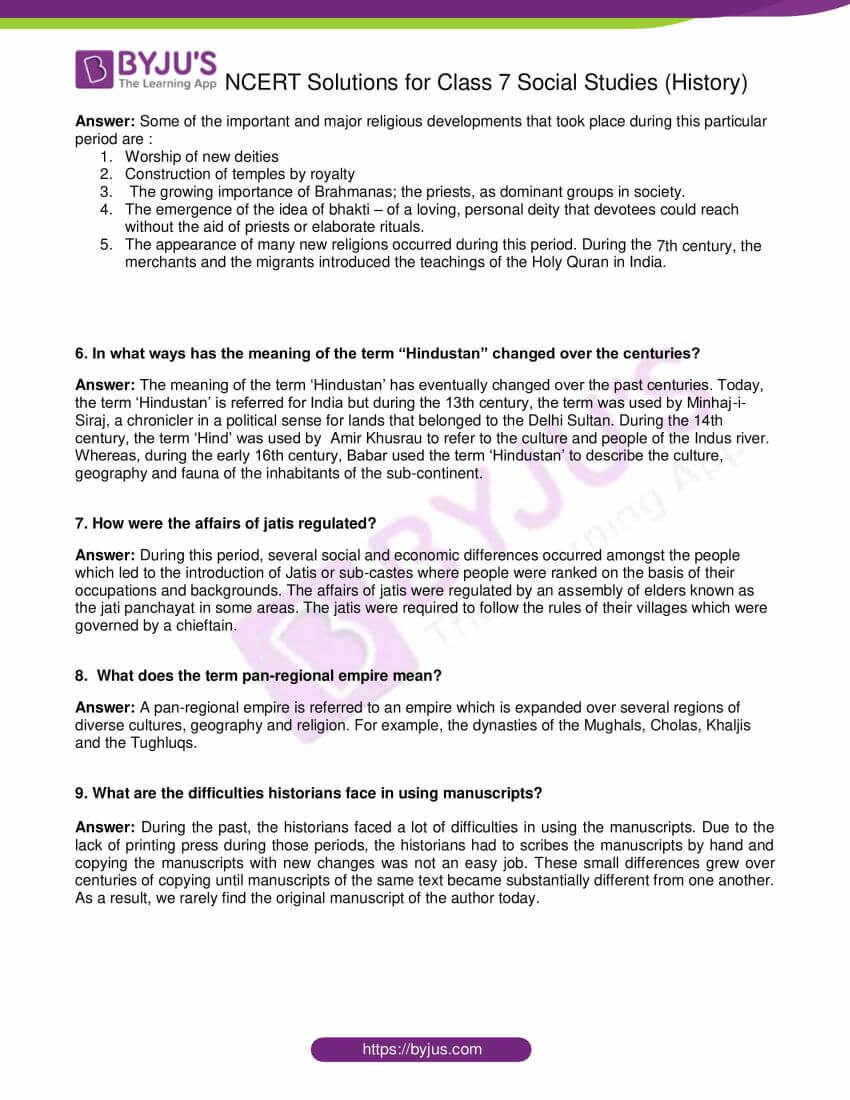 The solutions for Chapter 1, Tracing Changes Through A Thousand Years are given below. Students can also check NCERT Solutions for Class 7 for other subjects.

1. Who was considered a “foreigner” in the past?

Answer: According to the medieval period, any stranger who did not belong to a certain society or culture and was not a part of that particular village was regarded as a foreigner. For example, a city-dweller, therefore, might have regarded a forest-dweller as a foreigner. But, if two people belong to the same village, they are not foreigners in spite of their different religious or caste backgrounds.

(a) We do not find inscriptions for the period after 700.

(b) The Marathas asserted their political importance during this period.

(c) Forest-dwellers were sometimes pushed out of their lands with the spread of agricultural settlements.

(a) Archives are places where manuscripts are kept.

(b) Ziyauddin Barani was a fourteenth-century chronicler.

(c) Potatoes, corn, chillies, tea and coffee were some of the new crops introduced into the subcontinent during this period.

4. List some of the technological changes associated with this period.

Answer: Following are some of the technological changes that were associated with this period:

5. What were some of the major religious developments during this period?

Answer: Some of the important and major religious developments that took place during this particular period are :

6. In what ways has the meaning of the term “Hindustan” changed over the centuries?

7. How were the affairs of Jatis regulated?

Answer: During this period, several social and economic differences emerged among the people, which led to the introduction of Jatis or sub-castes, where people were ranked on the basis of their occupations and backgrounds. The affairs of jatis were regulated by an assembly of elders known as the jati panchayat in some areas. The jatis were required to follow the rules of their villages, which were governed by a chieftain.

8. What does the term pan-regional empire mean?

Answer: A pan-regional empire is referred to an empire which is expanded over several regions of diverse cultures, geography and religion. For example, the dynasties of the Mughals, Cholas, Khaljis and the Tughluqs.

9. What are the difficulties historians face in using manuscripts?

10. How do historians divide the past into periods? Do they face any problems in doing so?

Indian history was divided into three different periods by the British historians in the middle of the nineteenth century. The three periods were divided as “British”, “Muslim”, and “Hindu”. As per the British Historians, the history of the divided was classified in this manner as they believed that there were no significant developments in terms of culture, society, and economy apart from the change in  the religion of the rulers.

Such a division by the British historians has problems. Such a division ignores the diversity of the Indian subcontinent. The eleventh and eight centuries were completely different from the sixteenth or eighteenth century.

Historians do not see time just as a calendar, clock, years, days, or hours. The study of history becomes easier dividing them into different periods, or segments which possess similar characteristics. It reflects the similarities and changes in economic organisation, social changes, beliefs, and ideas.

When Historians read texts, maps, and documents of the past, they have to be careful about the contexts and different historical backgrounds in which they were produced as the cartography was different in two different periods.

11. Compare either Map 1 or Map 2 with the present-day map of the subcontinent, listing as many similarities and differences as you can find.

The NCERT Class 7 Our Pasts-II Chapter 1 talks about the following topics:

a. Value of papers

b. Manuscripts and chronicles

c. What are archives?

a. The appearance of new technology

b. Introduction to new crops and beverages

a. What is a pan-regional empire?

Is the Chapter 1 of NCERT Solutions for Class 7 History important for the final exam?

Yes, Chapter 1 of NCERT Solutions for Class 7 History is equally important as the other chapters for the annual exam. So, skipping up on this chapter by students can lead to low marks in the exam. Hence, students should thoroughly practice and revise the key topics of all the chapters regularly to ace the annual exam. Referring to these NCERT Solutions aid students to improve their conceptual knowledge and analysing abilities that are vital from the exam point of view.

From Chapter 1 of NCERT Solutions for Class 7 History, what are the topics that students can learn?

From Chapter 1 of NCERT Solutions for Class 7 History, students can learn about topics like –
New and old terminologies
a. Changes in terms and their meanings
Historians and their sources
a. Value of papers
b. Manuscripts and chronicles
c. What are archives?
New social and political groups
a. The appearance of new technology
b. Introduction to new crops and beverages
c. Regulation of jatis
Region and empire
a. What is a pan-regional empire?
Old and New Religions
a. Important religious developments
Thinking about Time and Historical Periods

What are the difficulties historians face in using manuscripts as discussed in the NCERT Solutions for Class 7 History Chapter 1?