A traveller visiting a medieval town can expect to find things based on the kind of town it is– a temple town, an administrative centre, a commercial town or a port town. Meanwhile, many towns have combined several functions.  There were administrative centres, temple towns, as well as centres of commercial activities and craft production. Students can learn more about Towns, Traders and Craftspersons from Chapter 6 of CBSE Class 7 History. NCERT Solutions for Class 7 History Chapter 6 “Towns, Traders And Craftspersons” contains the solutions to the exercises given at the end of Chapter of the book “Our Pasts-II”. These NCERT Solutions are the best resource to prepare for the exam. 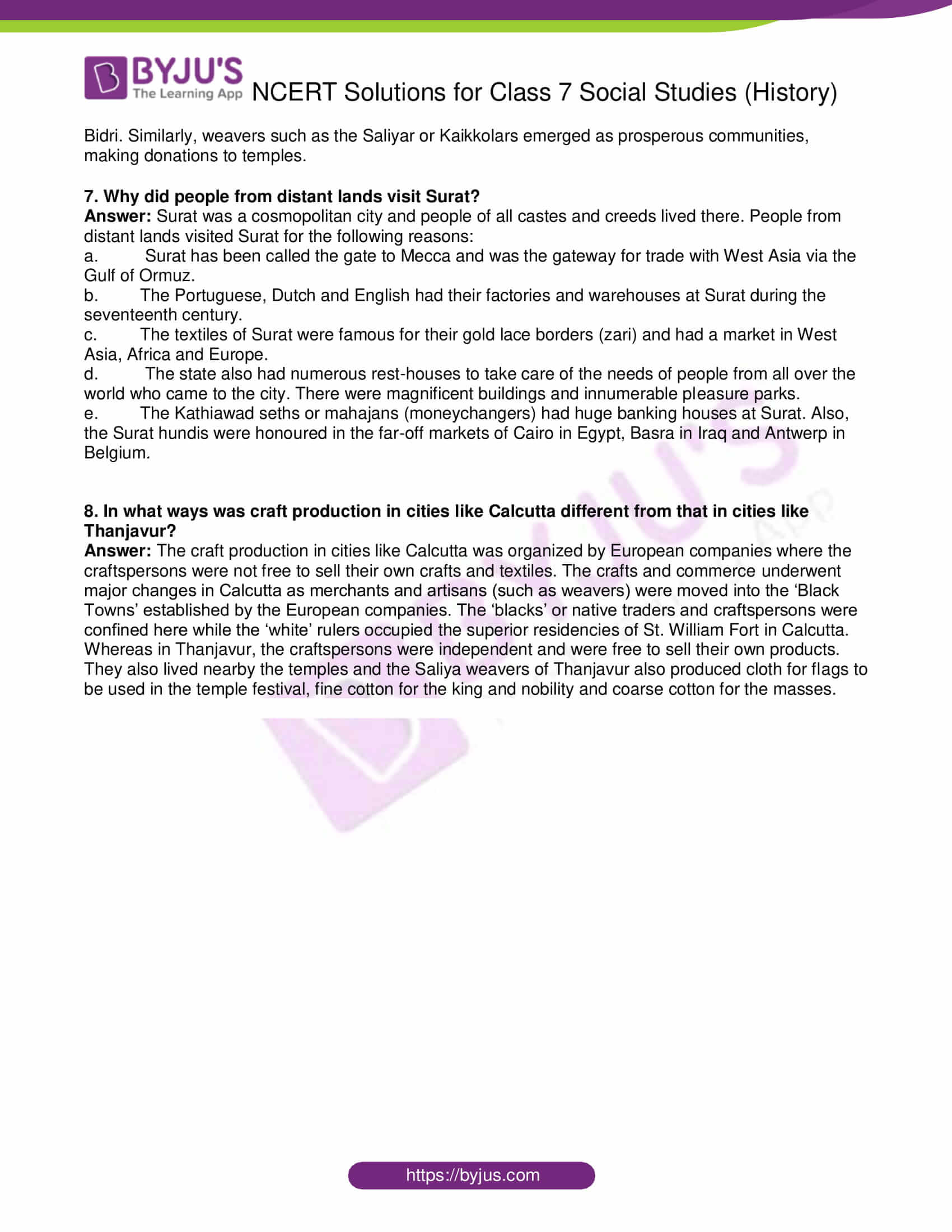 The solutions for chapter 6, Towns, Traders And Craftspersons are given below. Students should also check NCERT Solutions for Class 7 for other subjects.

(a) The Rajarajeshvara temple was built in ———.

(d) The Dutch established a settlement at ———— in Andhra Pradesh.

Answer: (a) The Rajarajeshvara temple was built in 1010 A.D.

(b) Ajmer is associated with the Sufi saint Khwaja Muinuddin Chishti.

(c) Hampi was the capital of the Vijayanagara Empire.

(d) The Dutch established a settlement at Masulipatnam in Andhra Pradesh.

(a) We know the name of the architect of the Rajarajeshvara temple from an inscription.

(b) Merchants preferred to travel individually rather than in caravans.

(c) Kabul was a major centre for trade in elephants.

(d) Surat was an important trading port on the Bay of Bengal.

3. How was water supplied to the city of Thanjavur?

Answer: Water supply to the city of Thanjavur came from wells and tanks.

4. Who lived in the “Black Towns” in cities such as Madras?

Answer: During the eighteenth century, the cities such as Bombay, Calcutta and Madras were formed. During this period, the crafts and commerce underwent major changes as merchants and artisans (such as weavers) were moved into the ‘Black Towns’ established by the European companies within these new cities. The ‘blacks’ or native traders and craftspersons were confined here while the ‘white’ rulers occupied the superior residencies like St. George Fort in Madras or St. William Fort in Calcutta.

5. Why do you think towns grew around temples?

Answer: Towns grew around temples because the temple towns represented a very important pattern of urbanisation. Temples were considered central to the economy and society. The rulers constructed these temples to demonstrate their devotion to various deities. They also endowed temples with grants of land and money to carry out elaborate rituals, feed pilgrims and priests and celebrate festivals. Therefore, a large number of priests, workers, artisans, traders, etc. settled near the temple to cater to its needs and those of the pilgrims and led to the formation of the temple towns. Some examples of temple towns include Kanchipuram and Madurai in Tamil Nadu and Tirupati in Andhra Pradesh.

6. How important were craftspersons for the building and maintenance of temples?

Answer: The Panchalas or Vishwakarma community consisting of goldsmiths, bronzesmiths, blacksmiths, masons and carpenters. The community played an essential role in the building of temples. They had an important role in the construction of big buildings, palaces, tanks and reservoirs. The craftspersons of Bidar were famous for their copper and silver works and eventually, their work came to be called as ‘Bidri’. Similarly, weavers such as the Saliyar or Kaikkolars emerged as prosperous communities, making donations to temples.

7. Why did people from distant lands visit Surat?

Answer: Surat was a cosmopolitan city and people of all castes and creeds lived there. People from distant lands visited Surat for the following reasons:

a. Surat has been called the gate to Mecca and was the gateway for trade with West Asia via the Gulf of Ormuz.

b. The Portuguese, Dutch and English had their factories and warehouses at Surat during the seventeenth century.

c. The textiles of Surat were famous for their gold lace borders (zari) and had a market in West Asia, Africa and Europe.

d. The state also had numerous rest-houses to take care of the needs of people from all over the world who came to the city. There were magnificent buildings and innumerable pleasure parks.

e. The Kathiawad seths or mahajans (moneychangers) had huge banking houses at Surat. Also, the Surat hundis were honoured in the far-off markets of Cairo in Egypt, Basra in Iraq and Antwerp in Belgium.

Answer: The craft production in cities like Calcutta was organized by European companies where the craftspersons were not free to sell their own crafts and textiles. The crafts and commerce underwent major changes in Calcutta as merchants and artisans (such as weavers) were moved into the ‘Black Towns’ established by the European companies. The ‘blacks’ or native traders and craftspersons were confined here while the ‘white’ rulers occupied the superior residencies like St. William Fort in Calcutta.

Whereas in Thanjavur, the craftspersons were independent and were free to sell their own products. They also lived nearby the temples. The Saliya weavers of Thanjavur also produced cloth for flags to be used in the temple festivals, fine cotton for the king and nobility and coarse cotton for the masses.

The NCERT Class 7 Our Pasts-II Chapter 6 talks about the following topics: