Intense devotion or love of God is the inheritance of different types of Bhakti and Sufi movements that have developed since the 8th Century. Before the emergence of large kingdoms, various groups of people worshipped their own gods and goddesses. However, with the development of towns, trade and empires, people were brought together and new ideas began to develop. For a better understanding of the concepts related to the devotional paths to the divine, students can refer to Chapter 8 of CBSE Class 7 History. We have also compiled here the NCERT Solutions for Class 7 History Chapter 8 “Devotional Paths To The Divine” to the exercises given in the textbook “Our Pasts-II”. These NCERT Solutions of the exercises will be useful for school exams.

Chapter 8: Devotional Paths To The Divine 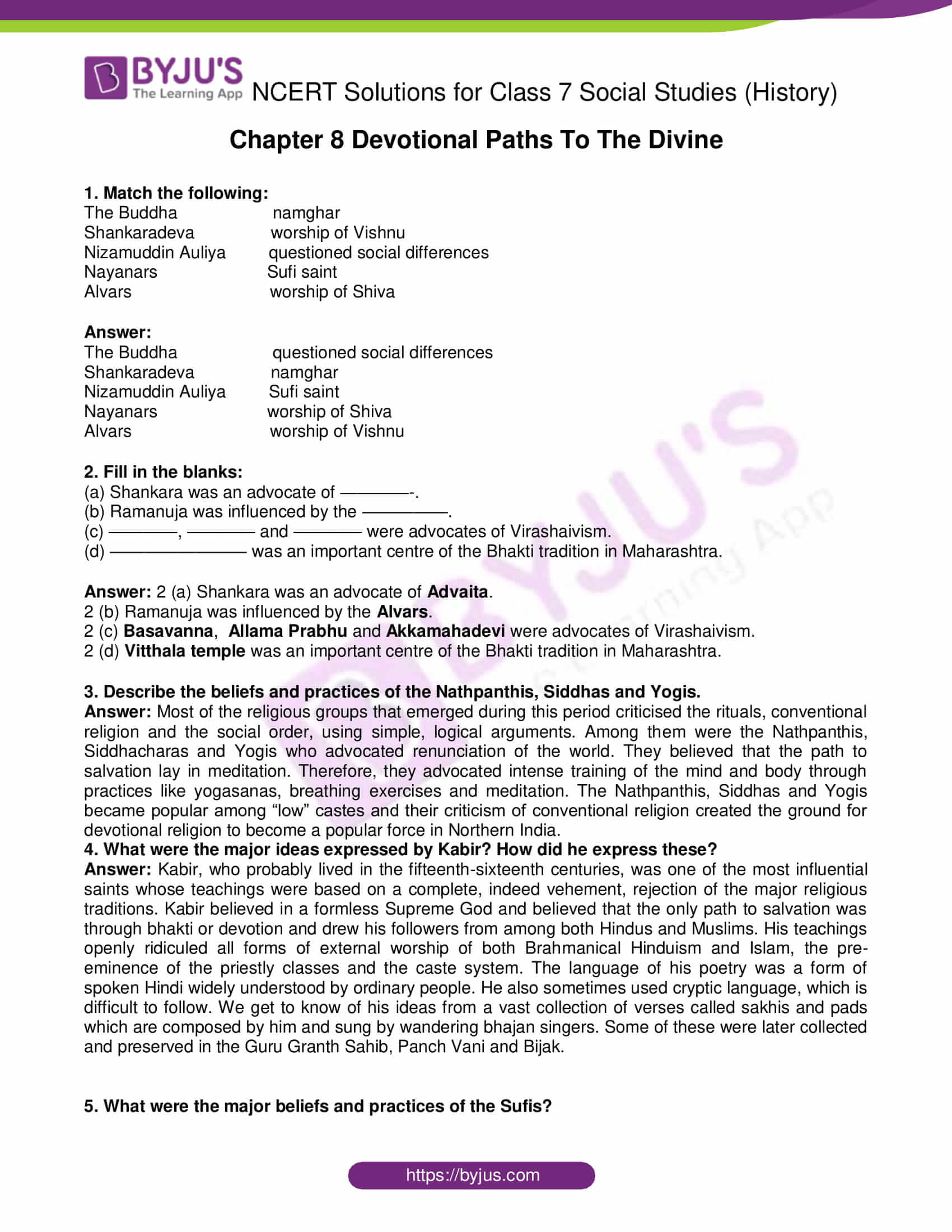 The solutions for Chapter 8, Devotional Paths To The Divine are given below. Students should also check NCERT Solutions for Class 7 for other subjects.

(d) ———————— was an important centre of the Bhakti tradition in Maharashtra.

Answer: (a) Shankara was an advocate of Advaita.

(b) Ramanuja was influenced by the Alvars.

(c) Basavanna, Allama Prabhu and Akkamahadevi were advocates of Virashaivism.

(d) Vitthala temple was an important centre of the Bhakti tradition in Maharashtra.

3. Describe the beliefs and practices of the Nathpanthis, Siddhas and Yogis.

Answer: Most of the religious groups that emerged during this period criticised the rituals, conventional religion and the social order, using simple, logical arguments. Among them were the Nathpanthis, Siddhacharas and Yogis who advocated renunciation of the world. They believed that the path to salvation lies in meditation. Therefore, they advocated intense training of the mind and body through practices like Yogasanas, breathing exercises and meditation. The Nathpanthis, Siddhas and Yogis became popular among “low” castes and their criticism of conventional religion created the ground for devotional religion to become a popular force in Northern India.

4. What were the major ideas expressed by Kabir? How did he express these?

Answer: Kabir, who probably lived in the fifteenth-sixteenth centuries, was one of the most influential saints whose teachings were based on a complete, indeed vehement, rejection of the major religious traditions. Kabir believed in a formless Supreme God and believed that the only path to salvation was through bhakti or devotion and drew his followers from among both Hindus and Muslims. His teachings openly ridiculed all forms of external worship in both Brahmanical Hinduism and Islam. He also ridiculed the pre-eminence of the priestly classes and the caste system. The language of his poetry was a form of spoken Hindi widely understood by ordinary people. He sometimes used cryptic language, which is difficult to follow. We get to know of his ideas from a vast collection of verses called sakhis and pads which are composed by him and sung by wandering bhajan singers. Some of these were later collected and preserved in the Guru Granth Sahib, Panch Vani and Bijak.

5. What were the major beliefs and practices of the Sufis?

Answer: The Sufis were Muslim mystics who rejected outward religiosity and emphasised love and devotion to God and compassion towards all fellow human beings. The Sufis often rejected the elaborate rituals and codes of behaviour demanded by Muslim religious scholars. They sought union with God much as a lover seeks his beloved with a disregard for the world. The Sufis composed poems expressing their feelings and a rich literature in prose. Anecdotes and fables developed around them. They developed elaborate methods of training using ‘Zikr'(chanting of a name or sacred formula), contemplation, sama (singing), raqs (dancing), discussion of parables, breath control, etc. under the guidance of a master or pir. It led to the emergence of the ‘Silsilas’, each following a slightly different method of instruction and ritual practice.

6. Why do you think many teachers rejected prevalent religious beliefs and practices?

Answer: Many teachers rejected prevalent religious beliefs and practices because such beliefs advocated social differences, where the lower castes were oppressed by the upper castes. They believed in the power of personal devotion and felt attracted by the idea of a Supreme God, which believed that the only path to salvation was through bhakti or devotion.

7. What were the major teachings of Baba Guru Nanak?

Answer: Baba Guru Nanak (1469-1539) was born at Talwandi (Nankana Sahib in Pakistan). He established a centre at Kartarpur (Dera Baba Nanak on the river Ravi) for regular worship that consisted of the singing of his own hymns. Irrespective of their former creed, caste or gender, his followers ate together in the common kitchen (langar). The sacred space thus created by Baba Guru Nanak was known as ‘Dharmsal’. It is now known as Gurdwara. The number of Baba Guru Nanak’s followers increased through the sixteenth century under his successors. The changing historical situation during the sixteenth and seventeenth centuries influenced the development of the Sikh movement. The ideas of Baba Guru Nanak had a huge impact on this development from the very beginning. He emphasized the importance of the worship of one God. He insisted that caste, creed or gender was irrelevant for attaining liberation. His idea of liberation was not that of a state of inert bliss, but rather the pursuit of active life with a strong sense of social commitment. He himself used the terms ‘nam’, ‘dan’ and ‘isnan’ for the essence of his teaching, which actually meant right worship, the welfare of others and purity of conduct. His teachings are now remembered as nam-japna, kirt-karna and vandchhakna, which also underline the importance of right belief and worship, honest living, and helping others. Thus, Baba Guru Nanak’s idea of equality had social and political implications.

8. For either the Virashaivas or the saints of Maharashtra, discuss their attitude towards caste.

Answer: The Virashaivas argued strongly for the equality of all human beings and against Brahmanical ideas about caste and the treatment of women. They were also against all forms of ritual and idol worship. During the thirteenth to the seventeenth centuries, Maharashtra saw a great number of saint-poets who rejected all forms of ritualism, outward display of piety and social differences based on birth. They even rejected the idea of renunciation and preferred to live with their families, earning their livelihood like any other person, while humbly serving fellow human beings in need and believed that bhakti lies in sharing others’ pain.

Devotional Paths To The Divine Summary

The NCERT Class 7 Our Pasts-II Chapter 8 talks about the following topics:

Is the Chapter 8 of NCERT Solutions for Class 7 History important from the examination perspective?

All chapters in the NCERT Solutions for Class 7 History are evenly important for the Class 7 exam. Hence, if students opt to skip preparations for any chapter, they might procure low grades in the exam. Thus, a student must have a regular learning plan allotting an equal amount of time to all the chapters. Further, students can access the NCERT Solutions of BYJU’S while answering the textbook questions. All the solutions are available in both offline and online modes to boost the exam preparation of the students.

List out the main topics important in Chapter 8 of NCERT Solutions for Class 7 History.

The main topics that are important in Chapter 8 of NCERT Solutions for Class 7 History are –
The NCERT Class 7 Our Pasts-II Chapter 8 talks about the following topics:
The idea of a Supreme God.
The Nayanars and the Alvars.
Basavanna’s Virashaivism.
The Saints of Maharashtra.
Nathpanthis, Siddhas and Yogis.
Islam and Sufism.
New Religious Developments in North India.

What are the merits of using the NCERT Solutions for Class 7 History Chapter 8?

The merits of using the NCERT Solutions for Class 7 History Chapter 8 are –
1. Subject experts have created the solutions carefully according to the latest CBSE guidelines.
2. Relevant diagrams are given wherever required to aid students to understand concepts effectively.
3. Provide accurate answers to all the textbook questions present in the textbook.
4. The solutions PDF help students during their revisions.