If you have ever visited the Taj Mahal, you will know how stunning it is. Also, there are many important national monuments built by ancient time rulers that are actually forts, palaces and so on. You can take a look at the architecture of some important monuments built by rulers in Chapter 5 of CBSE Class 7 History.  NCERT Solutions for Class 7 History Chapter 5 “Rulers And Buildings” includes the solutions to the exercises given in the book “Our Pasts-II”. NCERT Solutions of the exercises provided at the end of the chapter will be useful for school exams. 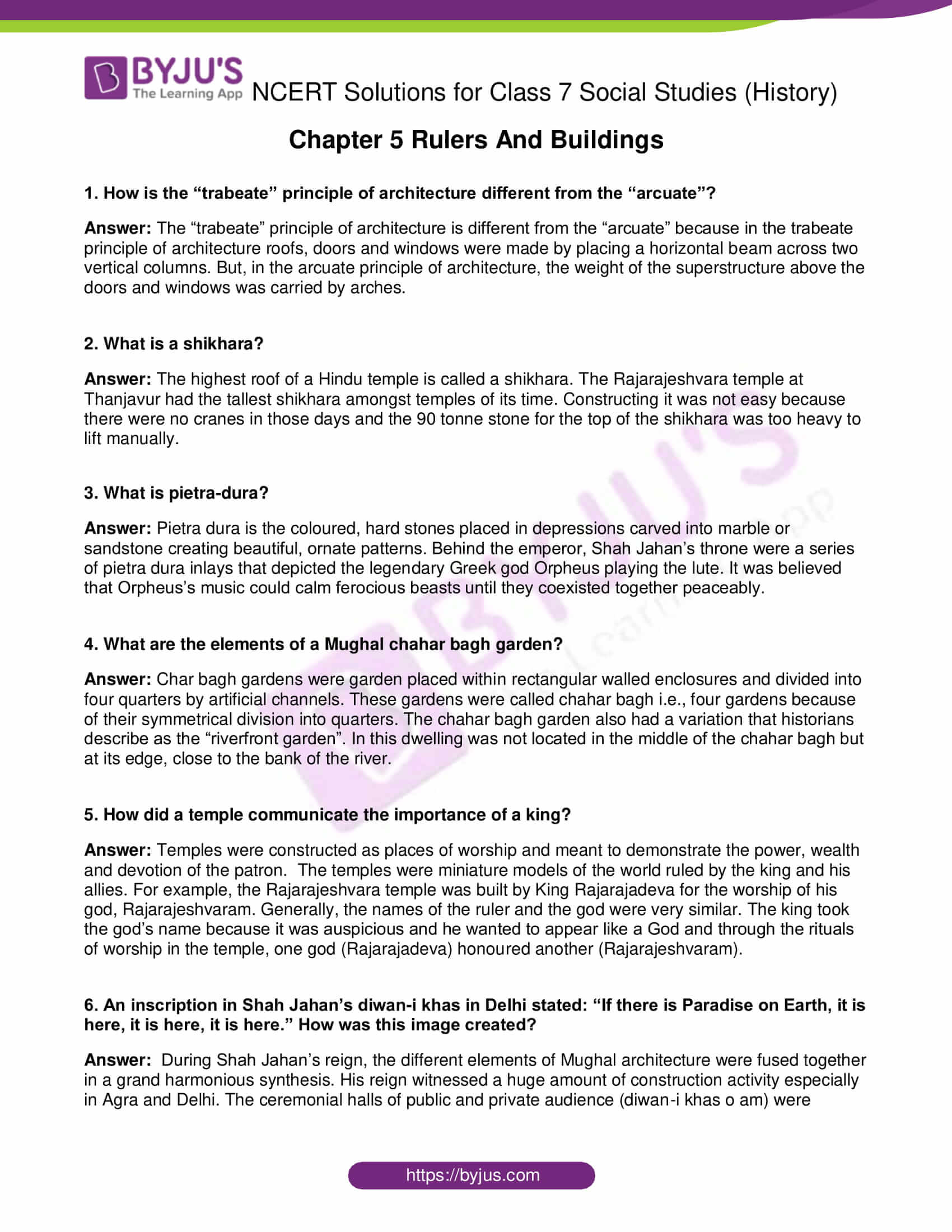 The solutions for Chapter 5, Rulers And Buildings are given below. Students should also check NCERT Solutions for Class 7 for other subjects.

1. How is the “trabeate” principle of architecture different from the “arcuate”?

Answer: The highest roof of a Hindu temple is called a ‘Shikhara’. The Rajarajeshvara temple at Thanjavur had the tallest shikhara among the temples of its time. Constructing it was not easy because there were no cranes in those days and the 90 tonne stone for the top of the shikhara was too heavy to lift manually.

Answer: Pietra dura is the coloured hard stones placed in depressions carved into marble or sandstone, creating beautiful and ornate patterns. Behind the Emperor Shah Jahan’s throne were a series of pietra dura inlays that depicted the legendary Greek god Orpheus playing the lute. It was believed that Orpheus’s music could calm ferocious beasts until they coexisted with humans peacefully.

4. What are the elements of a Mughal chahar bagh garden?

Answer: Char bagh gardens were gardens placed within rectangular walled enclosures and divided into four quarters by artificial channels. These gardens were called ‘Chahar bagh’ i.e., four gardens because of their symmetrical division into quarters. The chahar bagh garden also had a variation that historians describe as the “riverfront garden”. This dwelling was not located in the middle of the chahar bagh but at its edge, close to the bank of the river.

5. How did a temple communicate the importance of a king?

Answer: Temples were constructed as places of worship and are meant to demonstrate the power, wealth and devotion of the patron. The temples were miniature models of the world ruled by the king and his allies. For example, the Rajarajeshvara temple was built by King Rajarajadeva for the worship of his god, Rajarajeshvaram. Generally, the names of the rulers and the gods were very similar. The king took the god’s name because it was auspicious and he wanted to appear like a God. Through the rituals of worship in the temple, one god (Rajarajadeva) honored another (Rajarajeshvaram).

Answer: During Shah Jahan’s reign, the different elements of Mughal architecture were fused together in a grand harmonious synthesis. His reign witnessed a huge amount of construction activity, especially in Agra and Delhi. The ceremonial halls of the public and private audience (Diwan-i khas and Diwan-i-am) were carefully planned.These courts were placed within a large courtyard and were described as ‘Chihil Sutun’ or forty-pillared halls.

The audience halls were specially constructed to resemble a mosque and the pedestal on which Shah Jahan’s throne was placed was frequently described as the ‘Qibla’. The idea of the king as a representative of God on earth was suggested by these architectural features.

7. How did the Mughal court suggest that everyone – the rich and the poor, the powerful and the weak – received justice equally from the emperor?

Answer: The Mughal court suggests that everyone – the rich and the poor, the powerful and the weak – received justice equally from the emperor in the following ways:

a. The connection between royal justice and the imperial court was emphasized by Shah Jahan in his newly constructed court inside the Red Fort in Delhi.

b. Behind the emperor, Shah Jahan’s throne was a series of pietra dura inlays that depicted the legendary Greek god Orpheus playing the lute. It was believed that Orpheus’s music could calm ferocious beasts until they coexisted together peaceably.

c. The construction of Shah Jahan’s audience hall aimed to communicate that the king’s justice would treat the high and the low as equals, creating a world where all could live together in harmony.

8. What role did the Yamuna play in the layout of the new Mughal city at Shahjahanabad?

Answer: The river Yamuna played a major role in the layout of the new Mughal city at Shahjahanabad. Shah Jahan adapted the river-front garden in the layout of the Taj Mahal, the grandest architectural accomplishment of his reign. Here the white marble mausoleum was placed on a terrace by the edge of the river and the garden was to its south. Shah Jahan developed this architectural form as a means to control the access that nobles had to the river. Only the exceptionally favored nobles – like his eldest son Dara Shukoh – were given access to the river. All others had to construct their homes in the city away from the River Yamuna.

The NCERT Class 7 Our Pasts-II Chapter 5 talks about the following topics: