Regional cultures today are often the product of complex processes of intermixing of local traditions with ideas from other parts of the subcontinent. Some traditions appear specific to some regions, while others seem to be similar across regions. Yet others derive from older practices in a particular area but take a new form in other regions. Students can explore more about Chapter 9 of CBSE Class 7 History. NCERT Solutions for Class 7 History Chapter 9 “The Making of Regional Cultures” contains solutions to the exercises given in the book “Our Pasts-II”. These NCERT Solutions are a useful resource for school exams.

Chapter 9: The Making Of Regional Cultures 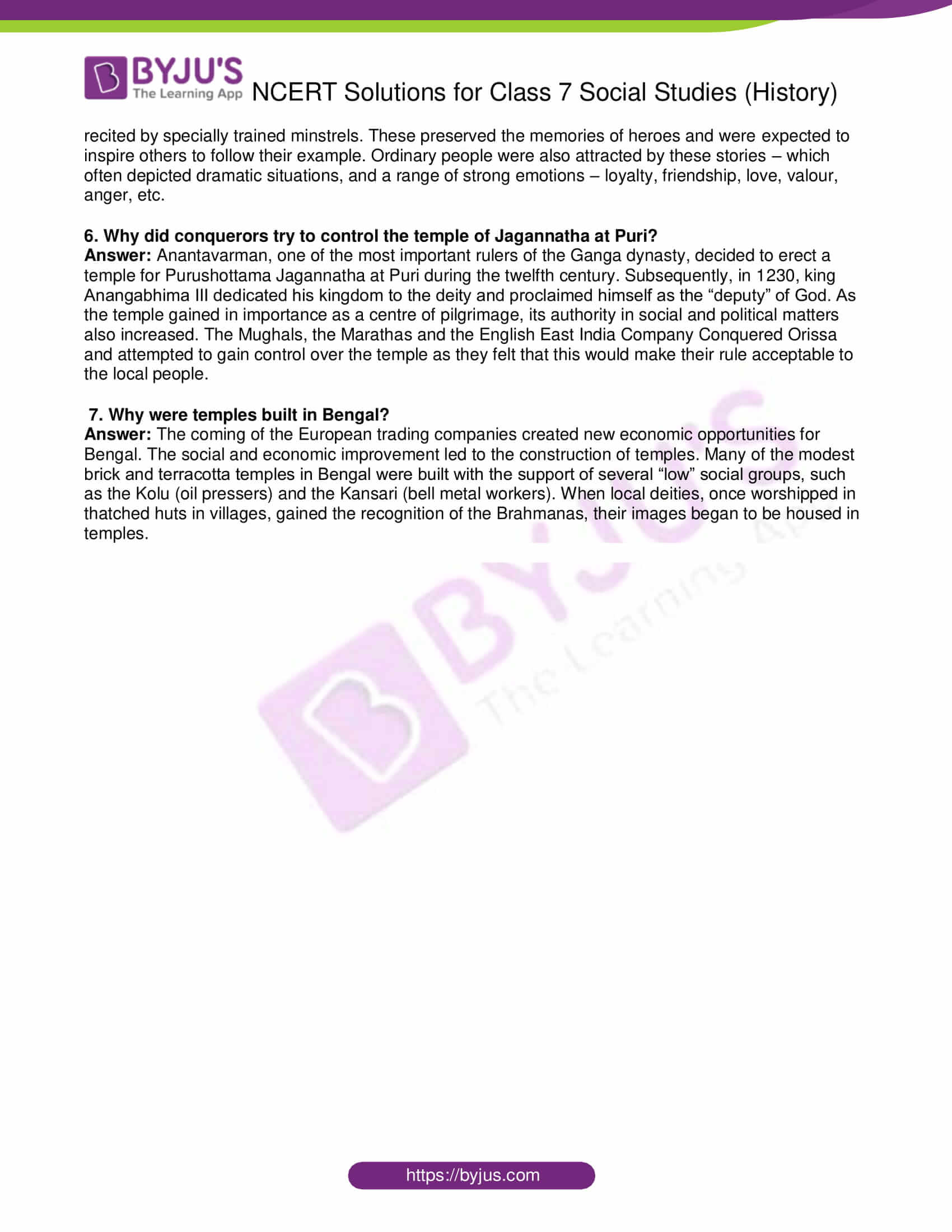 The solutions for chapter 9, The Making of Regional Cultures is given below. Students should also check NCERT Solutions for Class 7 for other subjects.

2. What is Manipravalam? Name a book written in that language.

Answer: Manipravalam means “diamonds and corals” referring to the two languages, Sanskrit and the regional language. A book written in Manipravalam is Lilatilakam, which deals with grammar and poetics.

3. Who were the major patrons of Kathak?

Answer: Kathak began evolving into a distinct mode of dance in the fifteenth and sixteenth centuries with the spread of the bhakti movement. The legends of Radha-Krishna were enacted in folk plays called rasa lila, which combined folk dance with the basic gestures of the kathak story-tellers. Under the Mughal emperors and their nobles, Kathak was performed in the court, where it acquired its present features and developed into a form of dance with a distinctive style. Subsequently, it developed in two traditions or gharanas: one in the courts of Rajasthan (Jaipur) and the other in Lucknow. Under the patronage of Wajid Ali Shah, the last Nawab of Awadh, it grew into a major art form.

4. What are the important architectural features of the temples of Bengal?

Answer: Bengal witnessed a temple-building spree from the late fifteenth century, which culminated in the nineteenth century. Many of the modest brick and terracotta temples in Bengal were built with the support of several “low” social groups, such as the Kolu (oil pressers) and the Kansari (bell metal workers). When local deities, once worshiped in thatched huts in villages, gained the recognition of the Brahmanas, their images began to be housed in temples. The temples began to copy the double-roofed (dochala) or four-roofed (chauchala) structure of the thatched huts. This led to the evolution of the typical Bengali style in temple architecture. Temples were usually built on a square platform with a relatively plain interior, but the outer walls of many temples were decorated with paintings, ornamental tiles or terracotta tablets. In some temples, particularly in Vishnupur in the Bankura district of West Bengal, such decorations reached a high degree of excellence.

5. Why did minstrels proclaim the achievements of heroes?

Answer: From about the eighth century, most of the present-day state of Rajasthan was ruled by various Rajput families. Stories about Rajput heroes were recorded in poems and songs, which were recited by specially trained minstrels. These preserved the memories of heroes and were expected to inspire others to follow their example. Ordinary people were also attracted by these stories – which often depicted dramatic situations and a range of strong emotions – loyalty, friendship, love, valor, anger, etc.

6. Why did conquerors try to control the temple of Jagannatha at Puri?

Answer: Anantavarman, one of the most important rulers of the Ganga dynasty, decided to erect a temple for Purushottama Jagannatha at Puri during the twelfth century. Subsequently, in 1230, king Anangabhima III dedicated his kingdom to the deity and proclaimed himself as the “deputy” of God. As the temple gained in importance as a centre of pilgrimage, its authority in social and political matters also increased. The Mughals, the Marathas and the English East India Company Conquered Orissa and attempted to gain control over the temple as they felt that this would make their rule acceptable to the local people.

7. Why were temples built in Bengal?

Answer: The coming of the European trading companies created new economic opportunities for Bengal. The social and economic improvement led to the construction of temples. Many of the modest brick and terracotta temples in Bengal were built with the support of several “low” social groups, such as the Kolu (oil pressers) and the Kansari (bell metal workers). When local deities, once worshipped in thatched huts in villages, gained the recognition of the Brahmanas, their images began to be housed in temples.

The Making of Regional Cultures Summary

The NCERT Class 7 Our Pasts-II Chapter 9 talks about the following topics: