The 18th Century political formations in India were very dramatic, with the country changing at a very rapid pace. During the first half of the century, the Mughal Empire dwindled as a result of the emergence of independent kingdoms. The second half also saw the British creating a strong presence in eastern India. Learn further about the 18th-century political formations from Chapter 10 of CBSE Class 7 History.  NCERT Solutions for Class 7 History Chapter 10 “Eighteenth-Century Political Formations” cover the solutions to the exercises given in the book “Our Pasts-II”. These NCERT Solutions of the exercises at the end of the chapter also help students to prepare most competently for the exam. 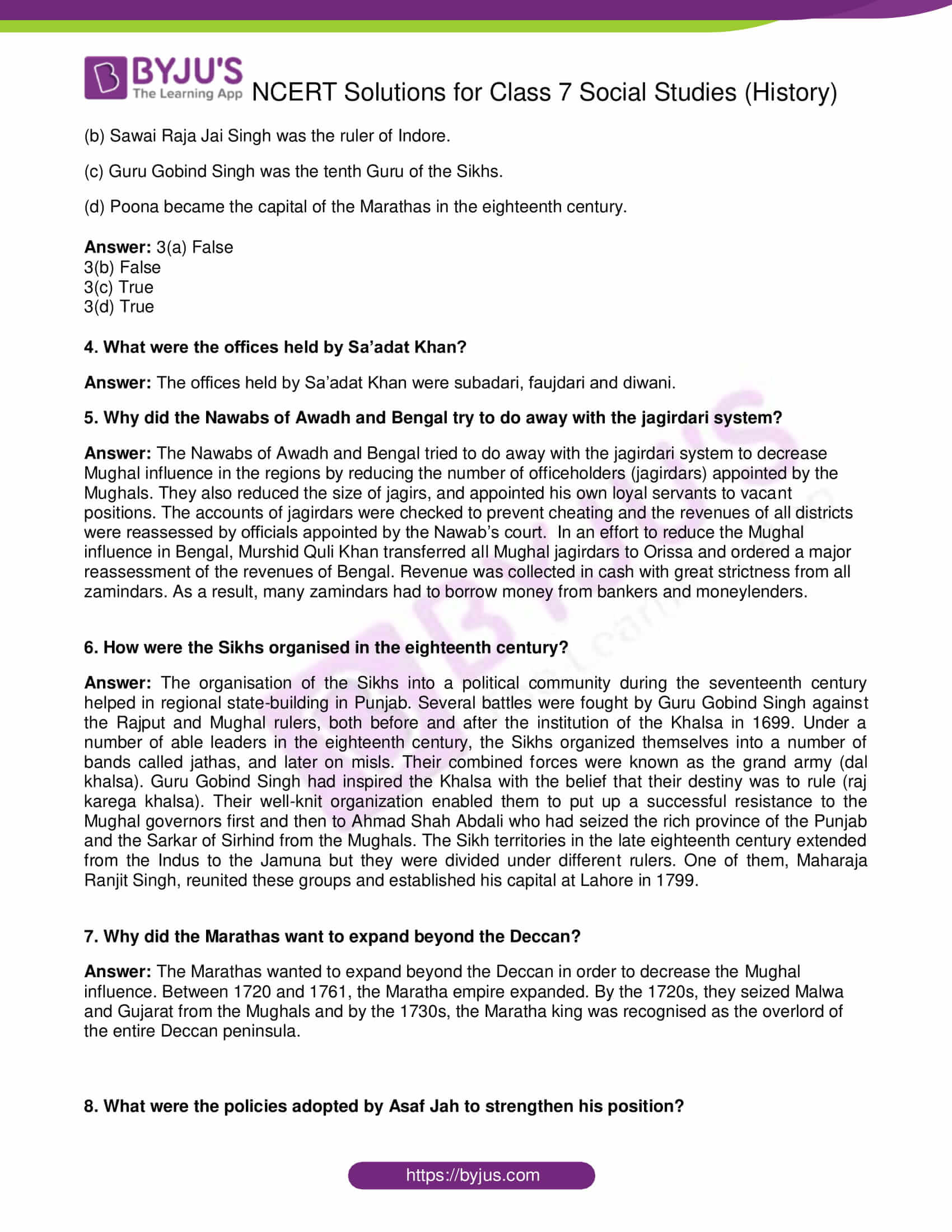 The solutions for Chapter 10, Eighteenth-Century Political Formations are given below. Students should also check NCERT Solutions for Class 7 for other subjects.

Answer: (a) Aurangzeb fought a protracted war in the Deccan.

(b) Umara and jagirdars constituted powerful sections of the Mughal administration.

(d) The founder of the Awadh state was Burhan-ul-mulk-Sa’adat Khan.

(b) Sawai Raja Jai Singh was the ruler of Indore.

(c) Guru Gobind Singh was the tenth Guru of the Sikhs.

(d) Poona became the capital of the Marathas in the eighteenth century.

4. What were the offices held by Sa’adat Khan?

Answer: The offices held by Sa’adat Khan were subadari, faujdari and diwani.

5. Why did the Nawabs of Awadh and Bengal try to do away with the jagirdari system?

Answer: The Nawabs of Awadh and Bengal tried to do away with the jagirdari system to decrease Mughal influence in the regions by reducing the number of officeholders (jagirdars) appointed by the Mughals. They also reduced the size of jagirs, and appointed their own loyal servants to vacant positions. The accounts of jagirdars were checked to prevent cheating and the revenues of all districts were reassessed by officials appointed by the Nawab’s court. In an effort to reduce the Mughal influence in Bengal, Murshid Quli Khan transferred all Mughal jagirdars to Orissa and ordered a major reassessment of the revenues of Bengal. Revenue was collected in cash with great strictness from all zamindars. As a result, many zamindars had to borrow money from bankers and moneylenders.

6. How were the Sikhs organised in the eighteenth century?

Answer: The organisation of the Sikhs into a political community during the seventeenth century helped in regional state-building in Punjab. Several battles were fought by Guru Gobind Singh against the Rajput and Mughal rulers, both before and after the institution of the Khalsa in 1699. Under a number of able leaders in the eighteenth century, the Sikhs organized themselves into a number of bands called jathas, and later on misls. Their combined forces were known as the grand army (dal khalsa). Guru Gobind Singh had inspired the Khalsa with the belief that their destiny was to rule (raj karega khalsa). Their well-knit organization enabled them to put up a successful resistance to the Mughal governors first and then to Ahmad Shah Abdali who had seized the rich province of the Punjab and the Sarkar of Sirhind from the Mughals. The Sikh territories in the late eighteenth century extended from the Indus to the Jamuna, but they were divided under different rulers. One of them, Maharaja Ranjit Singh, reunited these groups and established his capital at Lahore in 1799.

7. Why did the Marathas want to expand beyond the Deccan?

Answer: The Marathas wanted to expand beyond the Deccan in order to decrease the Mughal influence. Between 1720 and 1761, the Maratha empire expanded. By the 1720s, they seized Malwa and Gujarat from the Mughals and by the 1730s, the Maratha king was recognised as the overlord of the entire Deccan peninsula.

8. What were the policies adopted by Asaf Jah to strengthen his position?

Answer: Nizam-ul-Mulk Asaf Jah, the founder of Hyderabad state (1724-1748), was one of the most powerful members at the court of the Mughal Emperor Farrukh Siyar. Taking subsequent advantage of the turmoil in the Deccan and the competition amongst the court nobility, he gathered power in his hands and became the actual ruler of that region. Asaf Jah brought skilled soldiers and administrators from northern India who welcomed the new opportunities in the south. He appointed mansabdars and granted jagirs. Although he was still a servant of the Mughal emperor, he ruled quite independently without seeking any direction from Delhi or facing any interference.

The NCERT Class 7 Our Pasts-II Chapter 10 talks about the following topics:

What are the ways to learn the Chapter 10 of NCERT Solutions for Class 7 History faster?

Chapter 10 of Class 7 History explains about the eighteen century political formations. Students can quickly comprehend the key topics by referring to the NCERT Solutions for Class 7 History Chapter 10. It comprises answers to textbook questions written in an elaborate manner highlighting the important points. Further, all the answers are curated by subject experts as per the latest CBSE syllabus and guidelines.

What are the topics that students will learn in the Chapter 10 of NCERT Solutions for Class 7 History?

In Chapter 10 of NCERT Solutions for Class 7 History, students will learn about the following topics:
The crisis of the Empire and the Later Mughals.
The emergence of new states.
The Old Mughal Provinces.
The Watan Jagirs of the Rajputs.
Independence of the Sikhs, Jats and the Marathas.

Can the NCERT Solutions for Class 7 History Chapter 10 really help students with their board exam preparations?

The Class 7 board exams are a crucial checkpoint in every student’s academic life as it lays a foundation for all career goals. Before kickstarting preparations for the exam, students must have an overview of the syllabus and mark weightage for the concepts as per the CBSE guidelines. The resource primarily increases the logical and analytical thinking skills of students which are vital for taking an exam.