In this chapter, five separate concepts on the judiciary have been explained. Students will understand the reason why the independence of the judiciary is key to its functioning. Different examples of decision-making processes have been used to explain these processes. We have provided the answers to exercise questions in NCERT Solutions Class 8 Civics Chapter 5 Judiciary. By referring to these answers, students can easily score good marks in the exam. 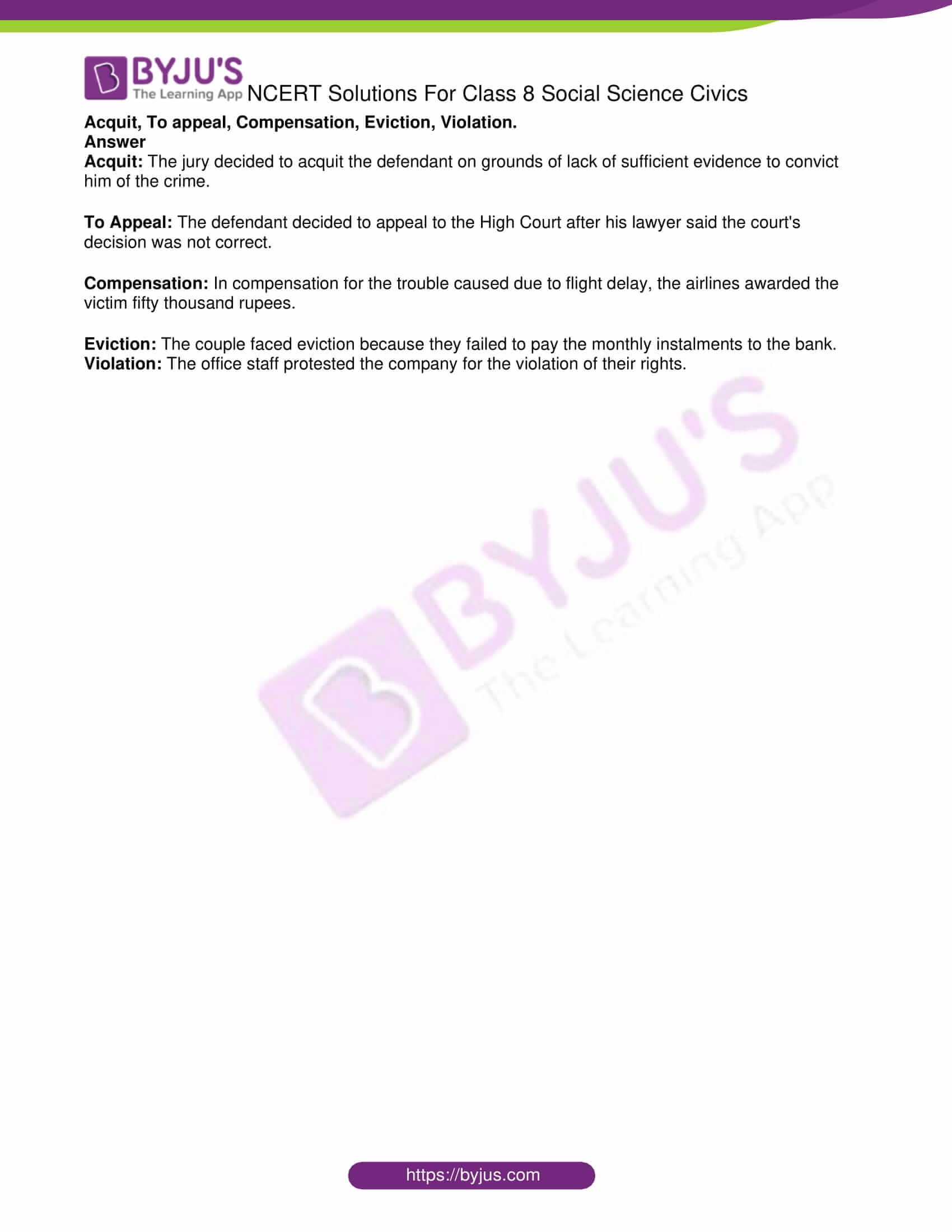 1. You read that one of the main functions of the judiciary is ‘upholding the law and Enforcing Fundamental Rights’. Why do you think an independent judiciary is necessary to carry out this important function?

Answer An independent judiciary is necessary to carry out the function of ‘upholding the law and enforcing Fundamental Rights’. It intends to shield the judicial process from external influences and provide full legal protection to all individuals going to court for whatever reason.

Anyone can approach the courts if they believe that their rights have been violated. If any law passed by the Parliament violates anyone’s Fundamental Rights, the judiciary has power to declare such a law as null and void.

2. Re-read the list of Fundamental Rights provided in Chapter 1. How do you think the Right to Constitutional Remedies connects to the idea of judicial review?

Answer The Right to Constitutional Remedies connects to the idea of judicial review in its capacity of protecting the rights of an individual against the working of the State legislature or executive. It allows citizens to move the court if they think that their fundamental rights are being violated by the State administration. Judicial review implies invalidation of legislative or executive action if it is seen to violate fundamental rights. Hence, judicial review and the Right to Constitutional Remedies are inter-connected because the judicial review is practiced when any fundamental Right is violated by the State. In this case, a higher court can repeal the judgments of a lower court based on its own investigation.

3. In the following illustration, fill in each tier with the judgments given by the various courts in the Sudha Goel case. Check your responses with others in class. 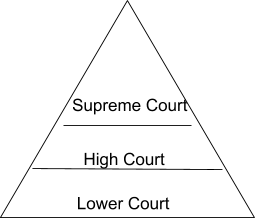 4. Keeping the Sudha Goel case in mind, tick the sentences that are true and correct the ones that are false.

(a) The accused took the case to the High Court because they were unhappy with the decision of the Trial Court.

(b) They went to the High Court after the Supreme Court had given its decision.

(c) If they do not like the Supreme Court verdict, the accused can go back again to the Trial Court.

(b) False. They went to the High Court after the Trial Court had given its decision.

5. Why do you think the introduction of Public Interest Litigation (PIL) in the 1980s is a significant step in ensuring access to justice for all?

Answer The Supreme Court in the early 1980s devised a mechanism of Public Interest Litigation or PIL to increase access to justice. It allowed any individual or organisation to file a PIL in the High Court or the Supreme Court on behalf of those whose rights were being violated. The legal process was greatly simplified and even a letter or telegram addressed to the Supreme Court or the High Court could be treated as a PIL. In the early years, PIL was used to secure justice on a large number of issues such as rescuing bonded labourers from inhuman work conditions; and securing the release of prisoners in Bihar who had been kept in jail, even after their punishment term was complete.

Thus, the introduction of Public Interest Litigation is a significant step in ensuring access to justice for all.

6. Re-read excerpts from the judgment on the Olga Tellis vs Bombay Municipal Corporation case. Now write in your own words what the judges meant when they said that the Right to Livelihood was part of the Right to Life.

Answer In the Olga Tellis vs. Bombay Municipal Corporation case, the judges stated that the Right to Livelihood was part of the Right to Life. They stated that life does not merely mean an animal existence, it cannot be lived without the means of livelihood. In the above mentioned case, people were poor and lived in slums they had small jobs and no other place to live. For them, the eviction of their slum means deprivation of their livelihood which consequently means deprivation of life. This is how judges connected right to life to the basic requirements of any livelihood i.e. Food, Clothes and shelter.

7. Write a story around the theme, ‘Justice delayed is justice denied’.

8. Make sentences with each of the glossary words given on the next page.

In India, there are certain laws that apply equally to all persons and a certain set of fixed procedures need to be followed when a law is violated. To enforce this rule of law, there is a judicial system that consists of the mechanism of courts. A citizen can approach a court when a law is violated. The judiciary, being an organ of government, plays a crucial role in the functioning of India’s democracy.

Can the BYJU’S NCERT Solutions for Class 8 Civics Chapter 5 be considered as the best study material for exam preparations?

What are the benefits of referring to the NCERT Solutions for Class 8 Civics Chapter 5?

Students are recommended to answer the textbook questions by referring to the NCERT Solutions for Class 8 Civics Chapter 5 so that the learning is complete at one go. All the solutions are created by subject experts in a comprehensive manner that enables students to understand the important concepts better. Students will be able to analyse the type of questions that might appear in the final exams when using this resource regularly.

What will students learn from Chapter 5 of NCERT Solutions for Class 8 Civics?

Below are the topics which students will learn in Chapter 5 of NCERT Solutions for Class 8 Civics:
What is an independent judiciary?
Separation of Powers
The structure of courts in India
State (Delhi Administration) vs Laxman Kumar and Others (1985)
The different branches of the legal system
Differences between criminal and civil law
Does everyone have access to the courts?