Protozoa are unicellular, eukaryotic, heterotrophic organisms. They are either free-living or parasites. There are around 65000 species of protozoans categorised in different groups. They lack a cell wall. There are many different cell organelles, that perform various tasks performed by different organs in higher animals, e.g. mouth, anus, intestinal tract, etc.

There are many protozoa, that cause various diseases in animals and humans, e.g. Plasmodium (malarial parasite), Trypanosoma (sleeping sickness), Trichomonas (trichomoniasis), etc.


The protozoa have many stages in their life cycle. Some of the stages of the life cycle are infectious.

The cyst stage is dormant and resistant to environmental stress, the trophozoite stage is reproductive and causes disease.

Habitat- Protozoa are found in the aquatic environment. They live in freshwater or oceans. Some are free-living and some are parasitic in plants and animals. Mostly they are aerobic but some are anaerobic and present in the rumen or human intestine.

Some of the species are found in extreme environments like hot springs. Some of them form resting cyst to overcome dry environments.

Size and Shape- The size and shape of Protozoa vary greatly, from microbial (1µm) to large enough and can be seen by the naked eye. The shell of unicellular foraminifera can have a diameter of 20 cm.

They lack a rigid cell wall, so they are flexible and found in various shapes. Cells are enclosed in a thin plasma membrane. Some of the species have a hard shell on the outer surface. In some of the protozoans especially in ciliates, the cell is supported by Pellicle, which may be flexible or rigid and give organisms the definite shape and help in locomotion.

Cellular Structure- They are unicellular having a eukaryotic cell. The metabolic functions are performed by some specialised internal structures.

Nutrition- Protozoa are heterotrophic and have holozoic nutrition. They ingest their food by phagocytosis. Some of the protozoan groups have a specialised structure called cytostome for phagocytosis.

The pseudopodia of amoeboids help in catching the prey. Thousands of cilia present in ciliates drive the food-laden water into the gullet.

The ingested food comes to the food vacuole and gets acted on by lysosomal enzymes. The digested food gets distributed throughout the cell.

Locomotion- Most of the protozoa species have flagella, cilia or pseudopodia. Sporozoa, which don’t have any locomotory structure, have subpellicular microtubules, which help in the slow movement.

Life Cycle- The life cycle of most of the protozoa alternates between dormant cyst stage and proliferating vegetative stage, e.g. trophozoites.

The cyst stage can survive harsh conditions without water and nutrients. It can remain outside the host for a longer duration and get transmitted.

The trophozoite stage is infectious, and they feed and multiply during this stage.

Protozoa is a phylum having unicellular heterotrophs. It comes under Kingdom Protista.

Protozoa are divided into four major groups based on the structure and the part involved in the locomotion:

They are parasites or free-living. 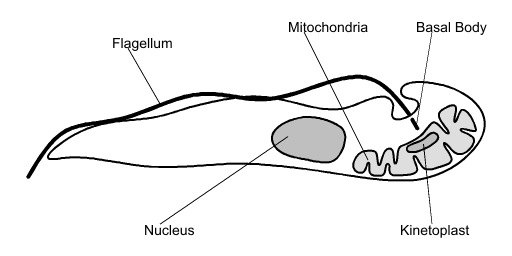 They live in the freshwater, sea or moist soil. 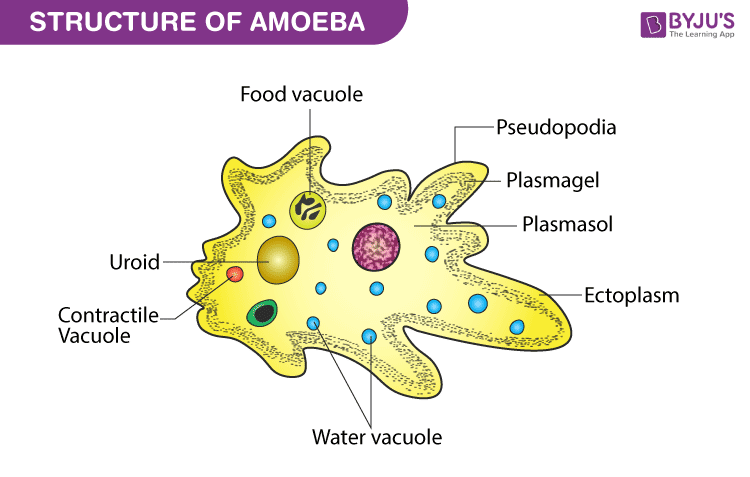 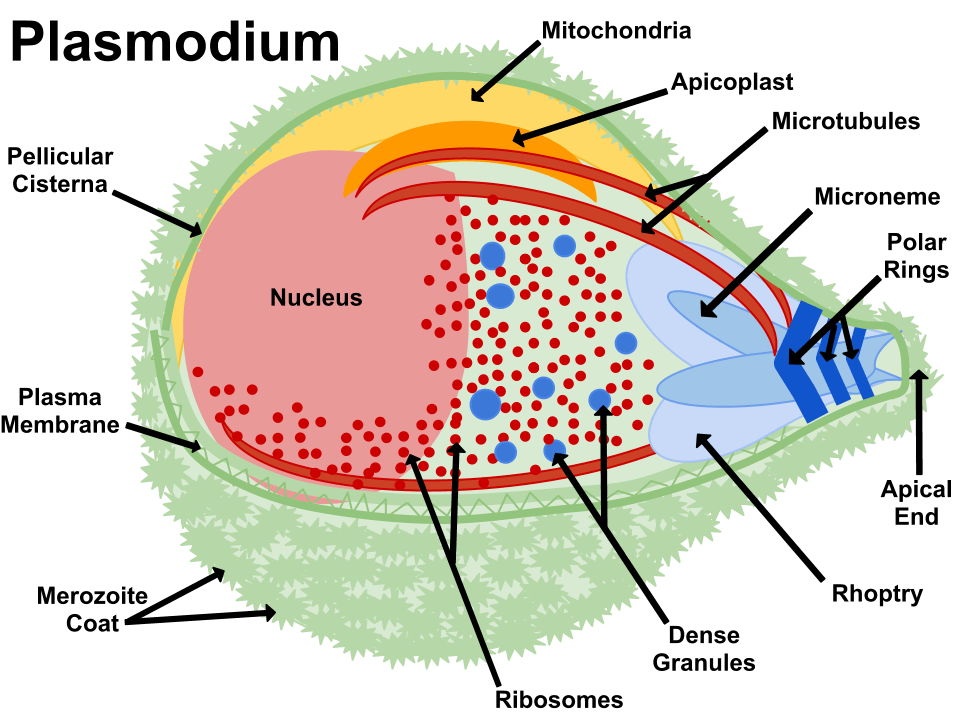 They are aquatic and move actively with the help of thousands of cilia. 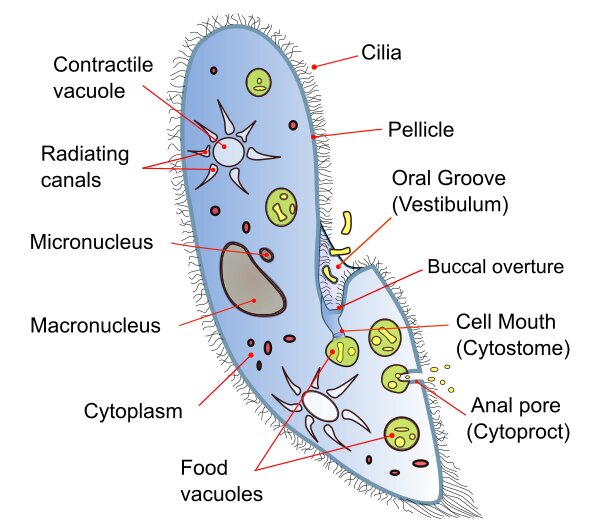 Examples of Diseases caused by Protozoa

Many of the protozoans are parasites and are disease causing pathogens. Find below the common diseases caused by protozoans.

Most of the protest diseases in humans are attributed to protozoa. Protozoa induces sickness in humans when it turns into human parasites. A majority of the prevalent and fatal diseases are caused by protozoan infections in humans such as Malaria, amoebic dysentery and African Sleeping Sickness.

These are capable of multiplying in humans, contributing to their survival, enabling the development of dangerous infections from one entity only. The transmission of protozoa found in the intestine of humans to another human usually takes place via the fecal-oral path, such as, through contaminated water or food or person-to-person contact. Those protozoa found in the tissue or blood of humans are passed to other humans by an arthropod vector.

Any type of sickness caused by bacteria is a bacterial disease. These bacteria are known to cause diseases by excreting or secreting toxins by releasing toxins internally that gets released with the disintegration of the bacteria or by the induction of sensitivity to its antigenic attributes.

Some of the dangerous diseases which are caused by bacteria are bacterial meningitis, diphtheria, tetanus, cholera, syphilis, gonorrhoea, Tuberculosis, Bubonic plague and Lyme disease.

Fungi are microbes, distinguished by chitin seen in their cell walls. Infections caused by fungi are referred to as mycosis. There are different fungi known to cause different types of diseases. These could be contagious, spreading from one to another person. They can also spread from contaminated surfaces or soil and even infected animals. Fungi usually reproduce by the release of spores. Since these spores can be picked by inhaling or direct contact, this infection usually affects nails, skin etc. It can get through the skin, affecting organs and can affect the whole organism.

A few diseases caused by fungi are –

Two diseases caused by Protozoans are – Malaria and Toxoplasmosis. The causative of Malaria is a spore-forming protozoan -Plasmodium spp. and is distinguished by periodic attacks of fever. Toxoplasma gondii is the causative agent of toxoplasmosis, which is a spore-forming protozoan. Man can take up the infections from sheep, cats, dogs and other animals.

What are ciliated and flagellated protozoans?

List any 5 diseases caused by protozoans and their symptoms.

Which disease is caused by bacteria?

Bacteria are known to cause several diseases in different species, some of the diseases caused by these bacteria are – Cholera, Tuberculosis, Syphilis, Tetanus, Botulism etc.

What is a parasite?

Parasites are entities found on or in host entities. they derive their food from or as a result of their hosts. Although parasites are not diseases, they can spread diseases.
Test your Knowledge on Protozoa!
Q5