Cretinism is a disease caused by hypothyroidism. Iodine deficiency in diet during pregnancy is the major cause of cretinism. Hypothyroidism leads to impaired development of the growing fetus and leads to mental retardation and stunted growth.
Table of Contents

“Cretinism refers to the congenital hypothyroidism or underactivity of thyroid glands during early childhood leading to stunted growth and mental retardation.”

The term cretin was derived from the French word chrétien, literally meaning “Christian” or “Christ-like” as the diseased were mentally retarded and incapable of doing sin. It is the Iodine deficiency disorder associated with insufficient thyroid hormone activity occurring during fetal, infant or childhood phases.

It is either due to extreme iodine deficiency, i.e. endemic cretinism or due to decreased synthesis of thyroid hormones, i.e. sporadic cretinism. It is typically diagnosed during infancy or childhood, however, the best preventive strategy is the screening of neonates. It is important to diagnose and treat cretinism early, a delay may lead to irreversible damage. Replacement of the hormone will produce an immediate effect. 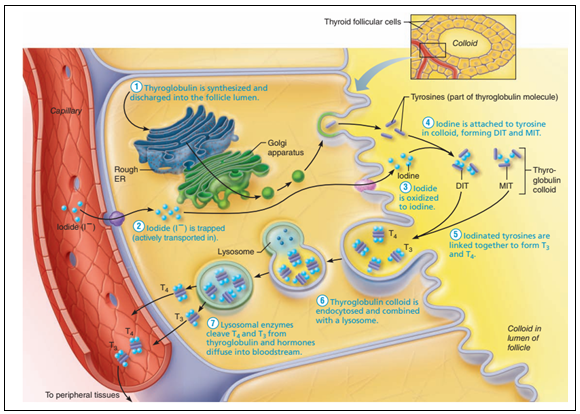 Also see: What are the symptoms of Thyroid Abnormalities?

Cretinism is of 2 types:

Neurological cretinism – It is characterized by the following conditions:

Myxedematous cretinism– It is characterized by the following conditions:

There are two main reasons for cretinism:

In children, hypothyroidism is the cause of cretinism. Total T4 and T3 level may be normal due to increased TBG (Thyroxine binding globulin). The elevated level of TBG may be due to maternal hyperestrogenism. The lack of feedback mechanisms will also give an elevated TSH level.

Neonatal cretinism may also be caused by maternal hypothyroidism. Hypothyroidism may result from the treatment of hyperthyroidism using antithyroid drugs or radioactive iodine.

What are the causes of Endemic cretinism?

The main causes of cretinism are the following:

What are the main symptoms of cretinism?

The main symptoms of cretinism are the following:

What are the characteristics of cretinism?

The three main characteristic features of neurologic endemic hypothyroidism in its absolutely developed type are very severe moronity alongside squint, deaf-muteness, and motor fitfulness with disorders of the arms and legs.

Can goitre develop into cancer?

Goitre is often the results of thyroid tumours, that are sometimes benign, however generally malignant. Most thyroid tumours occur as separate nodules, however, there are many styles of thyroid cancer which will cause generalized swelling of the secretor.

Stay tuned for more on cretinism and associated conditions. Learn about Multinodular Goitre, only at BYJU’S.

Test your Knowledge on Cretinism
Q5