ISRO’s first human space flight programme Gaganyaan is an important topic for the UPSC exam, coming under the science and technology section. Indian space missions are important from both the IAS Prelims and the Mains perspectives.

In this article, you can read all about the Gaganyaan Mission for the IAS exam.

Gaganyaan is a mission by the Indian Space Research Organisation (ISRO) to send a three-member crew to space for a period of five to seven days by 2022.

The success of Gaganyaan can lead to many more experiments with spaceflight missions. It will also give a fillip to India’s dream of setting up its own space station.

The spacecraft consists of a service module and a crew module, collectively known as the Orbital Module. The launch vehicle used for this mission will be the Geosynchronous Satellite Launch Vehicle GSLV Mk III. GSLV Mk III has the required payload capacity for the mission. Read more about GSLV Mk III in the linked article.

The human spaceflight is expected to take about 16 minutes to reach the intended low earth orbit.

Training for the astronauts

Prior to the human space flight mission, two unmanned missions are planned as mentioned above.

Before the unmanned missions, ISRO will have to complete many tests, the most important are:

Six tests have been shortlisted by ISRO to be carried out onboard the first unmanned space mission. Some of the tests are biological tests including a study on changes in kidney stone formation in drosophila melanogaster (the common fruit fly), the study of SIRT1 gene in it, microbial contamination, and co-crystallisation under microgravity conditions. 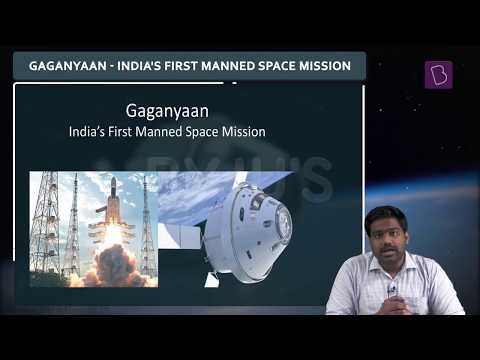 Which countries collaborated for Gaganyaan mission?

Space agencies of India and France signed an agreement for cooperation for the India’s first human space mission, Gaganyaan.France has a well-established mechanism for space medicine. It also has the MEDES space clinic, a subsidiary of CNES, where space surgeons undergo training.

Which launch vehicle will be used for Gaganyaan?

You can refer to the table below for a list of all important articles related to space exploration and ISRO.