Chandrayaan Mission was launched by the Indian Space Research Organisation (ISRO) and was India’s first mission to the moon. The spacecraft was launched on 22nd October 2008 by a modified version of the PSLV C-11 from Satish Dhawan Space Centre, Sriharikota, Andhra Pradesh. The vehicle was successfully inserted into lunar orbit on 8 November 2008.

Chandrayaan Mission is an important topic of the UPSC Syllabus. This article is an essay on Chandrayaan 2 and Chandrayaan 1 (India’s lunar mission).

In 1999, the Indian Academy of Sciences initiated an idea of undertaking an Indian scientific mission to Moon. This initiative was followed by a discussion with the Astronautical Society of India in 2000. Based on the recommendations, a National Lunar Mission Task Force was constituted by the Indian Space Research Organisation (ISRO). Thereafter, India’s first lunar mission Chandrayaan – 1 was launched on 22nd October 2008 from Satish Dhawan Space Centre at Sriharikota, Andhra Pradesh.

The mission successfully detected the presence of titanium and calcium along with the accurate measurements of iron, aluminium and magnesium on the moon. The Chandrayaan Mission 1 ended on 28 August 2009 after the communications to the probe were suddenly lost. The probe lasted for 312 days. The estimated cost of this project cost was Rs.386 Crore or US$60 million.

Chandrayaan – 2 is the second lunar mission of India after the success of Chandrayaan 1. This mission was conducted for topographical researches and mineralogical studies to have a better understanding of the Moon’s origin and evolution. Chandrayaan 2 Mission was launched from the Satish Dhawan Space on July 22, 2019, by GSLV Mk III-M1. The main aim of Chandrayaan 2 was to trace the location and abundance of lunar water on the moon’s surface.

All of the above parts were developed in India. 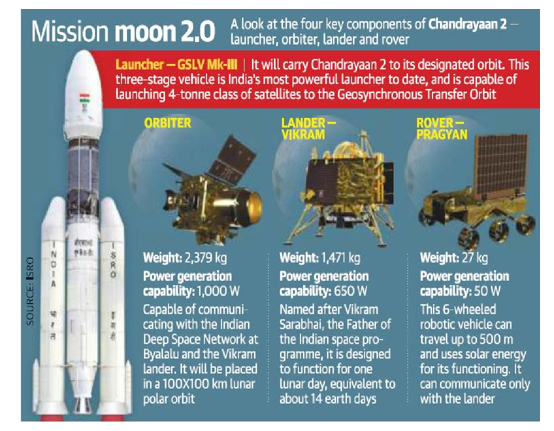 The orbiter, lander and rover collectively carried 14 scientific payloads, including a Laser Retro Reflector Array from NASA that provided precise measurements of the distance between the Moon and the Earth. Chandrayaan-2’s orbiter shall continue its mission for around a year.

The Indian space programme form a part of the science and technology and current affairs segments of the UPSC syllabus and is an important topic for the UPSC exam. Aspirants can refer to the UPSC Mains Syllabus at the linked article.

In all the space missions, no country has ever attempted to land a spacecraft in the polar regions of the moon. This gave India a lead in space exploration on an international level.

(ISRO) has released the data from the country’s second mission to the Moon, the Chandrayaan-2, for the general public.

Why is Chandrayaan 2 special?

Chandrayaan-2 mission will help India and the world gain a better understanding of the origin and evolution of the Moon by conducting detailed topographical studies, comprehensive mineralogical analyses, and a host of other experiments on the lunar surface. While there, we will also explore discoveries made by Chandrayaan-1, such as the presence of water molecules on the Moon and new rock types with unique chemical composition.The mission not only aims to expand India’s footprint in space, but also to inspire a future generation of scientists, engineers and explorers.

Why did Vikram lander fail?

Vikram lander “hard landed” on the moon on Sept. 6 because of a problem with the lander’s braking thrusters.The first phase of descent was performed nominally from an altitude of 30 km to 7.4 km above the moon surface.The lander slowed from 1,683 meters per second to 146 meters per second during that time.During the second phase of descent, the reduction in velocity was more than the designed value,due to this deviation, the initial conditions at the start of the fine braking phase were beyond the designed parameters.As a result, Vikram hard landed within 500 m of the designated landing site.

Vikram is likely dead after having gone through a cold lunar night during which its instruments would have frozen out of operation. Ever since the Indian Space Research Organisation lost contact with Vikram, NASA has made two attempts to locate the Chandrayaan-2 lander with the help of its Lunar Reconnaissance Orbiter.On both occasions, the LRO took photos of the landing site. However, analysis of the images failed to locate Vikram on the Moon’s surface.Vikram attempted landing in the south polar region of the Moon. The region is home to several craters, parts of which are permanently covered in shadows.

Which countries have made a soft landing on the moon?

In 1966 the USSR accomplished the first soft landings and took the first pictures from the lunar surface during the Luna 9 and Luna 13 missions. The U.S. followed with five uncrewed Surveyor soft landings. The Soviet Union achieved the first uncrewed lunar soil sample return with the Luna 16 probe on 24 September 1970.

India became the first Asian nation to reach the Red Planet when its indigenously made unmanned spacecraft entered the orbit of Mars on Wednesday — and the first nation in the world to successfully reach Mars on its first attempt.