A Kuznets curve is a graphical representation of market forces and income as and when an economy develops. The Kuznets curve was first developed by economists Simon Kuznets in the 1950s and 1960s.

Kuznets curve is an important topic in the economics segment of the IAS Exam.

Explanation of the Kuznets curve

The Kuznets curve shows that when a nation undergoes industrialization, the centre of the nation’s economy will shift towards urban centres. As internal migration by farmers looking for better-paying jobs in urban hubs causes a significant rural-urban inequality gap, the rural population will decrease and the urban population will increase.

When a certain level of average income is set and the process of industrialisation is in full swing, inequality is expected to decrease. Kuznets believed that inequality would follow an inverted “U” shape as it rises and falls with an increase in income per capita 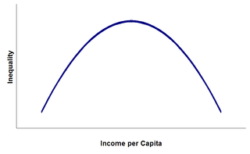 Kuznets curve diagrams show an inverted U curve, although variables along the axes are often mixed and matched, with inequality or the Gini coefficient on the Y-axis and economic development, time or per-capita incomes on the X-axis.

The Kuznets ratio is a measurement of the ratio of income going to the highest-earning households (usually defined by the upper 20%) to income going to the lowest-earning households, which is commonly measured by either the lowest 20% or lowest 40% of income. Comparing 20% to 20%, a completely even distribution is expressed as 1; 20% to 40% changes this value to 0.5.

Kuznets had two similar explanations for this historical phenomenon:

In both explanations, inequality will decrease after 50% of the shift force switches over to the higher paying sector

Criticism of the Kuznets Curve

It has been noted that the U-shape of the Kuznets curve does not represent progress in the development of individual nations but the historical differences between them. The reason being most of the data in the Kuznets curve were gathered from Latin America, a middle-income region with a history of inequality. When this variable is taken into account then the U-shape of the curve disappears.

The economic rise of East Asia has been used to criticize the validity of the Kuznets curve theory. The rapid economic rise of Japan, South Korea, China, Singapore – known as the Four Asian Tigers – between 1965 and 1990, was called the East Asian Miracle. Manufacturing and export grew quickly and powerfully. Yet simultaneously, life expectancy was found to increase and population levels living in absolute poverty decreased.

This development contradicts Kuznets curve theory because the economic development of the East Asian economy distributed the benefits of economic growth among the populace when the theory stated that rapid capital accumulation would lead to an increase in inequality.

The Economics Questions for UPSC Mains GS 3 are important for the IAS exam preparation.

What was Simon Kuznets known for?

Simon Kuznets (April 30, 1901 – July 8, 1985) was an American economist and statistician who received the 1971 Nobel Memorial Prize in Economic Sciences – for his empirically founded interpretation of economic growth which has led to new and deepened insight into the economic and social structure and process of development.

What are Kuznets cycles?

Aspirants can find complete information regarding the Government Exams through the linked article. More exam-related preparation materials will be found through the links given below: