The ozone layer or ozone shield is a region of the Earth’s stratosphere that absorbs most of the Sun’s Ultraviolet (UV) radiation. It is important to know facts about the Ozone layer as in July 2020, the Montreal Protocol mid-year meeting took place virtually where delegates discussed the action plans on ozone layer recovery and HFCs.

IAS aspirants should know the difference between the good ozone and bad ozone. The fact is that ozone is found in two layers of the atmosphere. The ozone found in the troposphere is near the earth’s surface and is harmful to life (causes breathing issues in humans) and plants (damages crops and plants.) Urban smog comprises the bad ozone. The good ozone is found in the stratosphere which also hosts the ozone layer. It is called good as it absorbs the sun’s harmful ultraviolet radiation. 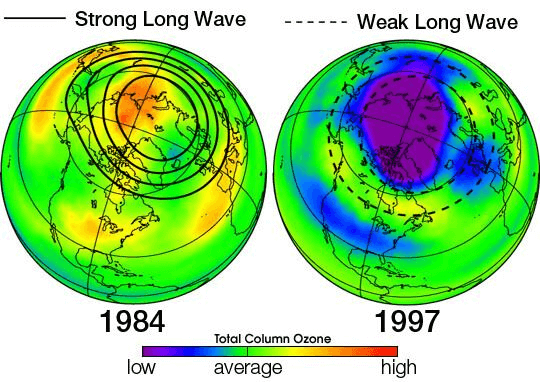 Ozone layer depletion refers to the thinning of the protective ozone layer in the atmosphere.

The depletion of the Ozone Layer is a serious issue and various programmes have been launched by the government of various countries to prevent it. But, steps should be taken at the individual level as well.

Updates on ozone later make an important part of current affairs and general knowledge. These are a crucial part of UPSC IAS Prelims as well as Mains examination. Environment and ecology is a very important segment of the UPSC Syllabus. What makes it interesting is that it is intertwined with current affairs immensely. It also has an overlap with other subjects such as geography, economy, and social issues for the IAS exam. Every year, several questions are asked from this section in the UPSC Prelims.

What is the Ozone Layer made up of?

Three atoms of oxygen make Ozone gas. The occurrence of Ozone gas in the stratosphere makes the ozone layer that protects Earth from Sun’s ultraviolet radiation.

Why is the Ozone layer important?

The ozone gas in the stratosphere absorbs most of the ultraviolet radiation coming from the sun, keeping the sterilization of the Earth’s surface away.

How can the Ozone layer be restored?

Restrictions in the use of CFCs and other halocarbons help in the restoration of the Ozone layer. Chlorine and Bromine affect the ozone layer. Montreal Protocol is one such step towards ozone layer restoration.