Yakshagana is a traditional folk dance form popular in coastal Karnataka districts and some parts of Kerala. It is considered that Yakshagana has originated as a product of the Vaishnava bhakti movement.

The article provides information about one of the signature folk dances of Karnataka – Yakshagana in the context of the IAS Exam.

The information is useful for preparing the Art & Culture section of the UPSC Syllabus.

The candidates can read more on Art & Culture topics for their upcoming exams from the links provided below: 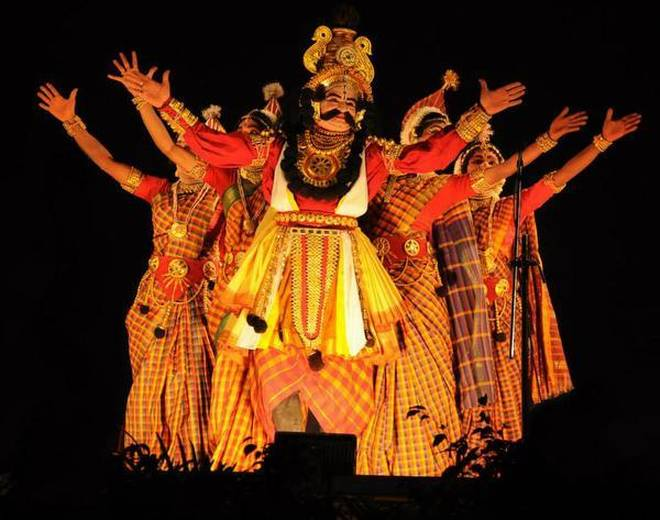 Musical instruments used in Yakshagana include:

There are several popular troupes (known as Melas) performing Yakshagana throughout the year. Some leading melas include:

What is ‘Pagade’ of Yakshagana? Other Art Forms of Yakshagana

Yakshagana was formerly known as Bayatala by some people in Karnataka. The sister art forms associated with Yakshagana are listed below:

Other Forms of Dance-drama or Folk Theatre

There is a wide variety of folk music, dance and drama forms. They can share common themes and concerns. Depending on the purpose of celebration, its characteristics also vary.

When it is performed and by whom?

It is found that two variants of Yakshagana exist. The characteristics/features of these two different styles of Yakshagana are listed and tabled below:

Dakshina Kannada District Sahitya Sammelan has urged the Karnataka government to declare Yakshagana as a representative art form of the State.

FAQ about Yakshagana for UPSC

Who was the first Yakshagana artist to receive the Rashtrapati Award?

Keremane Shivarama Heggade is the first Yakshagana artist to receive the Rashtrapati Award. He is the founder of the Yakshagana troupe named Idagunji Mahaganapathi Yakshagana Mandali. He is an exponent of Badagutittu style of Yakshagana.

How is every character introduced in Yakshagana performance?

Every important character is introduced by lifting the theray (screen), which prepares the audience for the actual moment when these characters will emerge on stage in all their grandeur.
Other relevant links: