The article aims to provide important Computer Software & Hardware questions that are commonly asked in the computer section of competitive exams.

Aspirants of various Government exams like RRB, Bank, Insurance, SSC etc must update themselves with basic knowledge of Computer hardware and software. At least this is what is expected of the candidates appearing for various exams. So, aspirants should go through the important Computer software and hardware questions given in this article carefully.

The computer awareness section is mostly a part of various Insurance and Bank exams conducted in the country.

What is Computer Hardware?

Few examples of computer hardware are –

Candidates can go through the Computer Fundamentals for detailed information and explanation of basic concepts of computer.

What is Computer Software?

Computer Software is a programming code executed on a computer processor. It is a set of programs that can do particular work of the user. The software simply is a collection of documentation, instructions, and procedures that are capable of performing different tasks on a computer system.

The computer software is divided into two major parts:

With this, candidates can check out the clear difference between Computer software and hardware in the given link.

Candidates can refer to the Computer Shortcut keys in the given link to prepare for the Computer Awareness section.

Given below are 25 important Computer Hardware and Software Questions that have been asked frequently in competitive exams and have high chances to be asked again. Candidates can go through these questions to prepare and practice.

Q1. Which of the following is not an input device?

Q.2. A light-sensitive device that converts the printed text, drawing, or other images into digital form is called ____.

Q.3. Sometimes the mouse pointer moves erratically. This is because of ___.

Q 4. A specialized program that allows user to utilize in a specific application is classified as

Q.5. ____ is known as the translator for low-level programming language.

Q.6. Information travels between components to Motherboard through?

Prepare for the Computer Knowledge section with the help of links given below:

Q.7. The resolution of Laser Printers are specified in terms of __?

Q.8.When referring to instruction words, a mnemonic is:

Q.10. _____ is the translator which performs macro expansion tasks.

Q.12. Which is the secondary memory of the Data processing system?

Q.14. Set of programs which consist of a full set of documentation is termed as

Q.16. A device that is used to transmit data over telecommunications lines is called ____.

Q.17. For comparison and calculations, the computer uses ____.

Q.18. In a typical computer operation, which of the following memories is put in use?

Q.19. The basic goal of computer processors is to convert the given data into ____

Q 20. Which among the following is not a peripheral hardware device in a computer system?

Q 21. Computers process data under the control of sets of instructions called____.

Q.23. The software used to drive microprocessor-based systems is known as ___

Go through the video and understand the difference between Computer Software and Hardware even better and also know the important topics on which the questions are frequently asked in the examination. 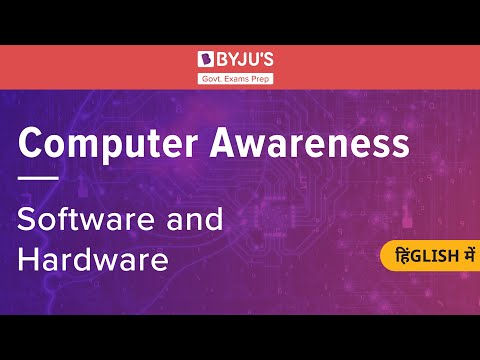 To ace the other sections as well, candidates can refer to the below-mentioned links:

Aspirants must know that over the years the competition for various Government exams has increased and a candidate needs to be thoroughly prepared if he/she wishes to qualify the exam.

Candidates can check the syllabus for various Government exams the articles given below:

For any further information regarding the Government exams and study material and preparation tips, candidates can turn to BYJU’S.