Computer Fundamentals for All Government Exams

Computer fundamentals are a common topic for most Government exams, especially the Bank, Railway and SSC exams conducted in the country.

It must be noted that very basic questions are asked from the computer section for most Government exams as the weightage of marks is not very high for this section.

All Government aspirants can check the Preparation Strategy for Competitive exams at the linked article and start their preparation for the upcoming Government exams accordingly.

What is a Computer?

An electronic device that accepts data and processes it into useful information is called a Computer. There are two main aspects of the computer:

Questions related to networking, the background of computer, Internet and other Computer associated terms are frequently asked in the competitive exams. So, in this article, we bring to the basics of computer and how it has evolved over the years.

To get the detailed syllabus for Computer Knowledge with the competitive exams point of view, candidates can visit the linked article and know the important topics along with a list of exams in which this section is included.

Learn more about Fundamentals of Computer from experts and understand and analyse the concept even better with the help of the video given below: 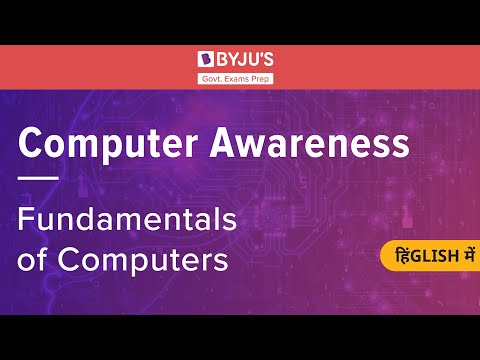 There are various terms and programs which may seem similar and candidates tend to get confused with their actual function and uses. Thus, given below are a few computer-based difference between articles which will strengthen an aspirant’s command over the Fundamentals of computer:

The computer started as a huge electronic device which took a large area for its instalment, and the mechanism was very complication. Still, then with time, those huge machines were converted into smaller versions of the divide, starting with the monitors, then laptop and later on the invention of tablets.

The first fully electronic computer was introduced in the 1930s, and since then, the development of computer and its related devices has been unstoppable.

Computers are nothing but an advanced version of Abacus, which dates back to almost 5000 years. Further below, we have discussed the five generations of computer and how these generations gradually helped in the development of this electronic device.

There are a total of five Generations of Computer, with each Generation something new was discovered to improvise the functioning and the use of the computer systems.

This Generation computers relied on Machine Language (the Language of 0s and 1s) and used Vacuum tubes as components of memory. They were huge in size and occupied almost a room-size area to fit in.

Given below are a few characteristic features of the 1st Generation of computer:

The first-ever transistor was invented in 1947 but could never be used in the computer until the 1950s. Given below are a few characteristic features of the 2nd Generation computers:

Two significant developments during this phase include the development of FORTRAN or Formula Translation and COBOL or Common Business Oriented Language, which was developed for business use.

Aspirants can visit the Computer Networks page to learn more about its types, functions and uses. This will help candidates master another important topic for the Computer Awareness section, from the examination point of view.

The phase when the usage of keyboards and monitors ha started for the input and output. The transistors had been reduced in size and were placed on silicon chips. This increased the speed of the computer.

Given below are the features of the 3rd Generation of computers:

The maximum developments were done during this time phase as technology has advanced many folds. By this time, millions of transistors could be placed on the silicon circuits.

The characteristic features of this Generation are given below:

The computers which were introduced during this Generation include Apple II, the first IBM computer, STAR 1000, and many more.

The current generation of computers which have made our lives easier and more convenient is all a part of the fifth generation of the computer.

Given below is some basic information about the 5th generation of computers:

Questions based on the different generations of computer are much likely to be asked in the various competitive exams conducted in the country.

To check the detailed computer syllabus for Government exams and the syllabus for other subjects, candidates can refer to the links mentioned below:

Aspirants can also get the detailed information regarding the Types of Computers, based on its purpose, size and type at the linked article.

Given below are the links to the exams which include Computer Knowledge as a part of their syllabus:

The image given below shows the different devices which can be connected to a computer:

A computer is used in various spheres of life today, and there are multiple advantages that the computer has brought in today.

Given below are the functions of the computer:

Computer devices can also be classified into categories:

To know the difference between hardware and software, candidates can visit the linked article.

Given below are a few other links which may help you prepare for the upcoming competitive exams:

Given below are a few sample questions based on the upcoming Government exams from the topic of Computer Fundamentals.

Q 1. Which of these is not an example of First Generation computer?

Q 3. Which of these is not an example of Microcomputer?

Q 4. Which of these was introduced in the second generation of computers?

Q 5. Name the storage device out of the given options

The questions given above will help you analyse the type of questions that may be asked in the final examination from this topic and how they may be framed.

Also, get some sample hardware and software questions at the linked article and thoroughly prepare yourself for the upcoming Government sector exams.

A few other Computer Fundamental links which will help candidates prepare themselves for the upcoming competitive exams are given below:

For aspirants who wish to know more about the different Government exams, their syllabus or get notes or study material, they can turn to BYJU’S for assistance.